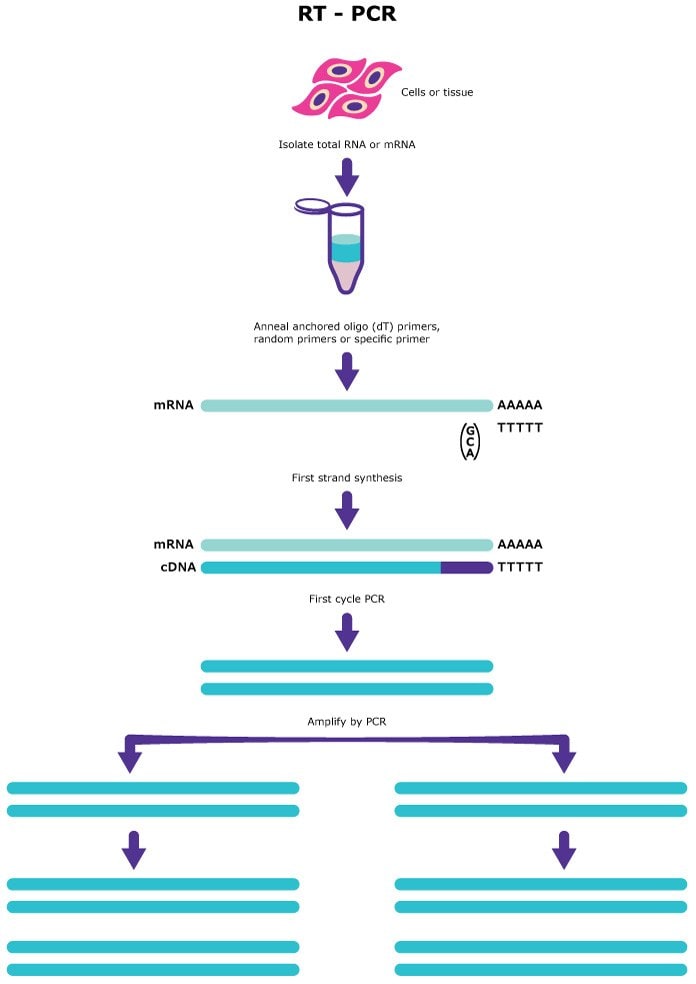 Polymerase chain reaction (PCR) is a powerful core molecular biology technique that is an efficient and rapid in vitro method for enzymatic amplification of specific DNA or RNA sequences from various sources. A standard PCR consists of target DNA, a set of synthetic oligonucleotide primers that flank the target DNA sequence, a thermostable DNA polymerase (usually Taq polymerase), and nucleotides. Using thermal cyclers, there are three stages during each amplification cycle, including denaturing double-stranded DNA (dsDNA) into separate single stranded DNA, annealing primers to the target DNA sequence, and extension, where DNA polymerase extends the DNA from the primers, creating new dsDNA with one old strand and one new strand. The strands synthesized in one cycle serve as a template in the next, resulting in a million-fold increase in the amount of DNA in just 20 cycles.

RT-PCR, or reverse transcriptase PCR, is a variation of the standard PCR technique that involves the amplification of specific mRNA obtained from very small samples. It eliminates the need for the tedious mRNA purification process required for conventional cloning techniques. With RT-PCR, reverse transcriptase and an RNA sample are used in addition to the standard PCR reagents. The reaction mixture is heated to 37 ˚C, which allows for the production of complementary cDNA copy from the RNA sample by reverse transcriptase. This cDNA then anneals to one of the primers leading to first strand synthesis. Standard PCR follows from here in which dsDNA is ultimately generated. RT-PCR is frequently combined with real time PCR (qPCR), which is widely used for the quantification of transcript levels in cells and tissues.

Hot Start PCR is a technology that inhibits hot start Taq polymerase or the incorporation of modified dNTPs during reaction set up until a heat activation step occurs. Various methods are available to arrest hot start polymerase activity and include, chemical modification, antibody-mediated, and aptamer-mediated methods.

Endpoint PCR is often used to detect the presence of targets and relative abundance at the completion of the reaction. The limited length of sequences produced during standard PCR, approximately 5 kb, is in part overcome with the incorporation of additional factors that provide “proofreading” activity. Long and accurate (LA) PCR incorporates the use of a second thermostable polymerase with 3′→5′ exonuclease to repair terminal nucleotide misincorporations, resulting in significantly increased fidelity and the ability to amplify DNA targets up to 40 kb in length.