Perfumes are complex mixtures comprising essential oils, aroma compounds, fixatives, and solvents. Contact dermatitis, an allergic response, may develop following skin contact with a sufficient amount of these substances in susceptible individuals. Rashes are most common on the face, under the arms, and on the hands, areas most often in direct contact with perfumes and other cosmetics. While per se a latent condition without visible signs or symptoms, the sensitivity can persist lifelong. The condition can be severe and generalized, with a significant impairment to quality of life and potential consequences for ability to work.

In 1999, the European Commission’s Scientific Committee on Cosmetic Products and Non-Food Products (SCCNFP) identified a set of 26 fragrance allergens with a well-recognized potential to cause contact allergy, for which information should be provided to consumers about their presence in cosmetic products[1]. Such a list has shown to be important in the clinical management of patients who are allergic to one or more of these 26 fragrance chemicals. In fact, these compounds must be reported in the ingredient list of cosmetic products sold in Europe so they can be avoided by patients with known allergic reactions. The aforementioned allergens are regulated by the European Directive 2003/15/EC fixing a maximum residue limit for “leave-on” and “rinse-off” products of 0.001% (10 ppm) and 0.01% (100 ppm), respectively[2].

In 2012, the revision of the SCCNFP Opinion (SCCS/1459/11, June 2012) on the clinical and experimental data published in 1999, confirmed the previously regulated allergens and stressed attention should be paid to additional fragrance substances which have been shown to be sensitizers in humans. Consequently, an updated list of allergens was reported, with a systematic and critical review of the scientific literature to identify them, both as single chemicals and as natural extracts. Eighty-two compounds were finally classified as contact allergens in humans, of which 54 were single chemicals and 28 were natural extracts[3].

The Scientific Committee on Consumer Safety (SCCS) examined available elicitation dose-response data to decide whether safe thresholds can be established for the fragrance allergens. The few studies available indicated that a general level of exposure of up to 0.8 ìg/cm² (0.01% in cosmetic products) may be tolerated by most consumers. The SCCS opinion is that levels of exposure below this would be sufficient to prevent elicitation for the majority of allergic individuals, unless there is experimental or clinical substance-specific data allowing the derivation of individual thresholds. With regards to the natural extracts, it was not possible to provide a safe threshold as no specific investigations exist and the model providing the general threshold (<0.01%) was based on individual chemicals. However, the SCCS considers that the maximum use concentration applied to the identified chemicals, both if added as chemicals or as an identified constituent of a natural ingredient, will reduce the risk of sensitization and elicitation from natural extracts.

The aim of the present research was the development of a flow-modulation comprehensive 2D GC/MS (FM GCxGC/MS) method for the determination of the recently indicated 54 allergens in fragrances. The detector was a rapid-scanning single quadrupole MS (qMS).

Fifty-three allergen standards with purity higher than 95% were used. A standard for santolol (mixture of α- and β-santalol) was not commercially available, thus it was isolated from sandalwood oil using a preparative MDGC system developed in our laboratory. Methanol (purity >99 %) was used to prepare the calibration solutions. Two fragrances were purchased in a local store. Calibration solutions and both samples were analyzed using the conditions listed in Figure 1. Mass spectral matching was carried out by using the FFNSC database[4]. 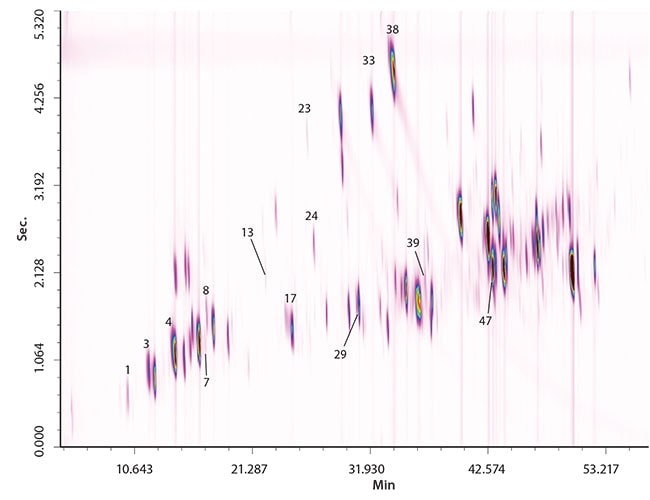 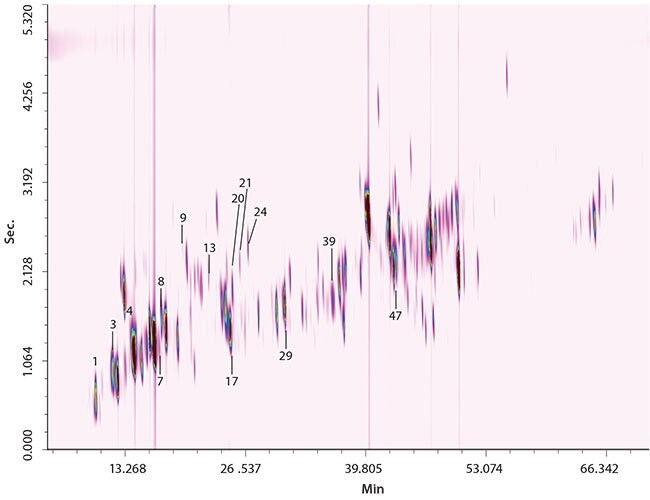 The 54 standard allergens, plus two internal standards (50 ppm), were used for calibration purposes (5, 10, 20, 50, and 100 ppm). Quantification was performed by using extracted ion chromatograms (Table 1). There are more than 54 allergens reported in Table 1 because some are considered to be mixtures (e.g. α- and β-santalol), and are here listed as single compounds. Method linearity was satisfactory, being in the range 0.9950-0.9988 (coefficients of determination). Method limits of quantification (LOQ) were all lower than 1 ppm, which is well below the European Commission’s regulated limit. LOQ values were extrapolated by considering a signal-to-noise (s/n) value of 10.

Two samples (1 and 2) of perfume were subjected to analysis. The quantification values expressed in ppm are reported in Table 1. Altogether 14 allergens were quantified in each sample (n = 2). The full-scan GCxGC-qMS chromatograms of sample 1 and 2 are shown in Figure 1. As can be seen, the SLB-5ms/SLB-35ms combination produced a satisfactory distribution of the analytes across the 2D space. Both columns are characterized by high thermal stability as can be seen from the absence of column bleed in the chromatogram. Moreover, retention time precision was excellent over a prolonged period on time (45 days of applications), confirming the stability of the 5ms and 35ms phases in each dimension.

The proposed method appears to be a reliable and sensitive approach for the determination of allergens in perfumes following the SCCNFP Opinion (SCCS/1459/11, June 2012).