Cell culture has been traditionally conducted on flat plastic substrates to study cell and tissue biology. These two-dimensional (2D) substrates are inadequate in fully capturing the complexities and intricacies presented to the cells in vivo. The ability to transition from these flat surfaces to textured substrates that provide threedimensional (3D) environments has long been an unmet need of researchers around the world. However, it is now possible to conduct more accurate experiments and obtain results that closely shadow what is observed in a living organism through the nanofiber-coated multiwell plates developed by Nanofiber Solutions (Figure 1). These well plates not only mimic the complex topography of the extracellular matrix (ECM) found in vivo, but they also allow for live cell imaging (Figure 1) and easy post-process analysis. 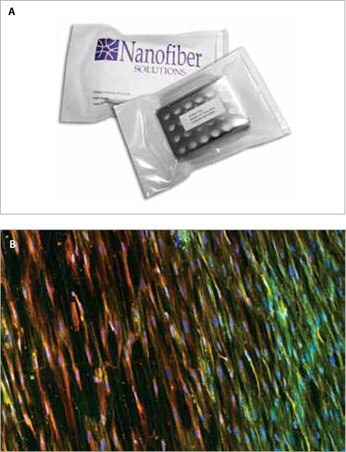 Figure 1. A) Example of the 24-Well Plate Produced by Nanofiber Solutions and B) Fluorescence Image of Human Mesenchymal Stem Cells on Aligned Nanofiber Demonstrating the Ability to Image through the Nanofiber Substrate.

The significance of this cell culture innovation cannot be fully grasped unless some recent research comparing 2D culture and 3D culture has been examined. Recent cancer studies done by Abbott’s group have revealed breast tumor cells cultured in 3D that have become malignant can be made to return to their original state when an antibody against ß-integrin is added to the system1. Furthermore, Yamada’s group discovered fibroblasts cultured in 3D had high motility, divided at a faster rate than those cultured in 2D, and assumed an asymmetric shape that is characteristic of fibroblasts found in living tissue2. These differences in cell structure and behavior, which may seem insignificant on first glance, can actually have a tremendous impact on basic cell biology research, and the discovery and development of medical treatments and drugs. For instance, Wang et al. discovered both normal and malignant breast cancer cells had high expression of adenoviral receptors in 2D culture, while only malignant cells carried a large number of receptors in 3D culture3. The implications of the study are groundbreaking because the results from the study opened the gates to using gene therapy for cancer treatment. If simply changing the way the cells are cultured can have such an impact on the different options we pursue to treat a disease, one is left to wonder: How many viable avenues for treating a disease have we foreclosed already due to misleading results obtained from 2D cell culture? This type of predicament can be entirely avoided in the future with the use of nanofiber substrates, which are not only ideal for 3D cell culture, but also amenable to customization according to the needs of particular cell types or research areas. So far, nanofiber substrates have been successfully adopted and used for general cell culture, drug discovery and toxicity assays, stem cell expansion and controlled differentiation, production of monoclonal antibodies, and tissue engineering.

With respect to general cell culture, nanofiber plates provide a far more realistic representation of the native tissue than any other substrate type. Images provided in Figure 2 attest to the nanofibrous environment found in vivo and the close resemblance of synthetic nanofibers. As one example, the nanofibrous texture of the lung ECM is very closely mimicked in size, shape, and appearance by the nanofiber scaffolds, while tissue culture polystyrene (TCPS) has no resemblance whatsoever.

An advantage of using nanofiber substrates is they can also be produced in a highly aligned orientation. The orientation of the culture substrate plays an important role in the study of cell behavior whose native environments consist of highly aligned ECM such as white matter in the brain, central nervous system, skeletal muscle, and cardiac tissue. For instance, human mesenchymal stem cells (hMSCs) were observed to assume a compact morphology on randomly oriented nanofibers and an elongated morphology on aligned fibers, which helped them differentiate into functional cardiomyocytes (Figure 1). In Figure 3, human lung cancer cells adopt three very distinct morphologies when cultured on TCPS, randomly oriented nanofibers, and aligned nanofibers. The different cellular morphologies greatly influence the cellular behavior, which is why it is so critical to culture cells in an environment that can accurately reproduce the 3D nanofibrous environment found in vivo. The first column shows scanning electron microscope images. The second column is stained for vinculin (red), tubulin (green), and the nucleus (blue). The third column is stained for phosphorylated paxillin (red), actin (green), and the nucleus (blue). All fluorescence images were taken with a confocal microscope and imaged through the nanofiber scaffold demonstrating the ability for high-resolution microscopy.

The nanofiber scaffolds are also very useful in drug discovery and toxicity assays because assays conducted on these scaffolds reveal drug sensitivities that often go undetected in other in vitro models. For example, glioblastoma cells are highly invasive in vivo and their migration can easily be quantified on the nanofiber substrates4. The cell cultures revealed dispersion of glioma cells was significantly inhibited by STAT3 inhibitors on both the nanofiber scaffolds and brain slices (the current gold standard for glioma migration), but not on 2D surfaces using traditional “scratch assays”5. These results clearly demonstrate the inadequacies of existing culture methods and a potential new high-throughput in vitro drug discovery technology.

The superior ability of nanofiber scaffolds to provide a better cell culture platform technology can be further evidenced by the production of biologics. For instance, a dramatic increase of 300% was observed in monoclonal antibody production on nanofibers versus TCPS. When one million hybridoma cells were seeded on each culture substrate, 886,000 cells were viable on TCPS while 2.5 million cells were viable on the nanofiber substrate after 48 hours. This difference in cell proliferation attests to the fact that cells prefer the nanofiber scaffolds over the unnatural environment provided by 2D surfaces.

Nanofiber scaffolds have the potential to pave the way for tremendous scientific discoveries by not only providing in vitro 3D culture models, but also by facilitating regenerative medicine and the synthesis of artificial organs. Since the body naturally consists of a nanofibrous environment (Figure 2), the synthetic nanofiber scaffold structure lends itself well to the tissue engineering of hollow organs such as blood vessels, trachea, esophagus, intestines, etc. In fact, the first synthetic nanofiber human trachea was implanted in November 2011 in Sweden. The patient, from Maryland, was a 30-year-old man with a rare form of tracheal cancer that required the removal of his entire trachea. The removed organ was replaced with a nanofiber trachea that was infused with the patient’s bone marrow stem cells. Figure 4 shows the artificial trachea after fabrication and then just before it was implanted.

Figure 4.Synthetic Nanofiber Trachea after Fabrication at the Nanofiber Solutions Facility in Columbus, OH, and then after Being Perfused with the Patients’ Stem Cells Immediately before Implantation at the Karolinska Institute.

As illustrated in the many previous examples, nanofiber scaffolds are the future of scientific research and innovation. Not only do they provide realistic in vitro models for cell culture, but they also function as viable materials for tissue engineering and regenerative medicine. Nanofiber products are changing the way life science research is performed; they are the future of patient care throughout the world.