In June of 2011, food safety authorities in Hong Kong found phthalate ester contamination in a variety of imported food and drink products1. Among these foods were several brands of ramen noodle kits. Specifically, there was concern with the presence of bis(2-ethylhexyl) phthalate (DEHP) in the oil-based flavor packets in these kits. The method currently used in China for the analyses of phthalate esters in foods requires gel permeation chromatography (GPC) as a cleanup step to remove fats and oils prior to GC-MS analysis2. GPC cleanup is extremely effective. However, it is also a time consuming technique.

For this article, solid phase microextraction (SPME) was evaluated for suitability to perform the extraction of phthalate esters from the fatty matrix of oil-based flavor packets in ramen noodle kits, eliminating the need for GPC cleanup. The goal was to demonstrate a method that is simple and relatively fast. Calibration standards were prepared in corn oil. Unspiked and spiked samples of chicken and beef oil flavor packets were prepared. High temperature headspace extraction of all standards and samples was done with an SPME fiber, which was then directly desorbed into the GC-MS system. Recovery data was also generated for each matrix.

Standard preparation: A calibration stock solution containing 16 phthalate esters in hexane was prepared. An internal standard stock solution containing deuterated analogs in hexane was also prepared. When possible, direct analogs of each phthalate ester were used as internal standards for quantification. Otherwise, the closest analog eluting prior to the analyte in the GC-MS analysis was used. Seven calibration standards ranging from 100 to 2000 µg/kg were prepared as follows:

Corn oil was used to matrix-match the standards to the types of samples to be extracted/analyzed.

GC column: An SLB®-5ms capillary GC column was selected for its low bleed characteristics and high maximum temperature limit. A 20 m x 0.18 mm I.D. dimension was used to allow for a fast analysis.

Extraction temperature: High temperature heated headspace was chosen based on previously published work, in which a 50/30 µm Divinylbenzene/Carboxen/Polydimethylsiloxane (DVB/CAR/PDMS) fiber was used3. Therefore, an extraction temperature of 90 °C, measured in the headspace over the oil, was selected. Higher temperatures were not evaluated due to the possibility of burning the flavored oil samples.

Fiber choice: References in the literature indicated two fibers as useful for this application, a DVB/CAR/PDMS fiber, and a 100 µm Polydimethylsiloxane (PDMS) fiber3,4. These two fibers were compared by extracting corn oil samples spiked at 100 µg/kg, and comparing the absolute responses obtained for each phthalate ester. Data obtained for several of the analytes is presented in Figure 1. The DVB/CAR/PDMS fiber yielded better response for the lighter phthalate esters, while the PDMS fiber was better for the heavier ones, including several very low responding analytes. Since ample response was obtained for the lighter phthalates on both fibers, the PDMS fiber was chosen to optimize response for the heavier analytes. 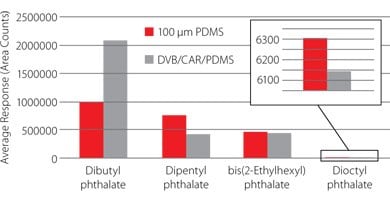 Extraction time: Extraction time was evaluated using the PDMS fiber, and 30 minutes was found to be optimal. A drop in the response of many of the phthalate esters was observed after 30 minutes. A chart plotting response versus extraction time is shown in Figure 2 for several of the analytes. 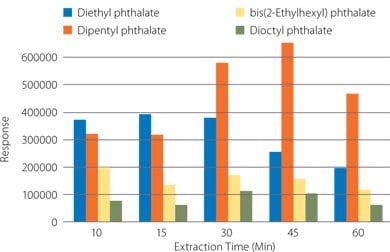 Calibration and linearity: All calibration standards were extracted by SPME prior to GC-MS analysis. Calibration curves generated for several of the analytes are presented in Figure 3, and a chromatogram of the analysis of the 500 µg/kg standard is presented in Figure 4. Using internal standard correction to compensate for fluctuations in response, linearity was generally very good. A first order fit using corrected responses was used for subsequent quantitation. 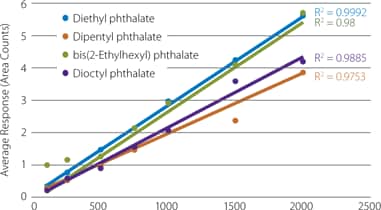 Sample/matrix: Analytes and internal standards added to a 15 mL vial, mixed, hexane evaporated, reconstituted with 1 g oil from a ramen noodle chicken flavor packet, heated until headspace at 90 °C
Other conditions and peak IDs are the same as Figure 4.

Summaries of the steps used in a published method and the SPME method are compared in Table 1. The estimated total preparation time for the published method is 150 minutes per sample. GPC cleanup and the subsequent concentration step accounts for the bulk of this time. Of this total time, 105 minutes requires handson work. This is due in part to multiple transfer steps, plus the concentration step (~20 mL to 2.0 mL) following GPC cleanup.

By comparison, the 42 minute total preparation time for the SPME method is much shorter, and only requires 12 minutes of hands-on work. In addition to the shorter sample preparation time, the SPME method does not require solvent extraction, and no sample transfer steps are necessary. Robotic autosamplers are available which would automate the heated headspace extraction and sample injection steps of the SPME method. While SPME can be done manually, an automated set-up would further reduce the hands-on-time and increase productivity and method reproducibility.

Using internal standard corrected response factors, the phthalate ester levels (in µg/kg) were calculated for all unspiked and spiked samples. Also calculated were % recovery, average % recovery, and %RSD values as appropriate. Results are summarized in Table 2 (chicken) and Table 3 (beef). Several phthalate esters were found in the unspiked samples. However, the levels are below the limit established by Chinese authorities that indicates “food adulteration or a misuse of food packaging materials”5. The levels observed most likely were caused by the plastic packaging.

Recovery and reproducibility of the chicken flavored oil samples was generally very good (Table 2). The phthalate esters showing lower recoveries (<80%) were many of those that were quantified using an internal standard that was not a direct deuterated analog. There was matrix present in the analysis that interfered with DMEP. The high %RSD value for DEHP could not be attributed to matrix interference, however the level detected in the unspiked chicken oil was almost 2X that of the spiking level. Ideally, replicates of the unspiked samples would determine the variability in the DEHP level. However, as stated previously, due to limited sample availability, only a single unspiked sample was prepared.

The beef flavored oil samples exhibited much more matrix interference in the analysis, which is reflected in the recovery and reproducibility of many of the analytes (Table 3). In the case of DBEP, DNOP, and DNP, accurate quantitation was not possible. The consistency of the beef flavor packet was much less homogenous compared to the chicken flavor packet, making it difficult to sample consistently. %RSD values were generally higher for the heavier phthalate esters. This may be due to matrix (which appeared to contain some water) having a greater effect on the extraction efficiency of the heavier (and less polar) phthalate esters.

High temperature headspace SPME can be used for the extraction of phthalate esters from oily food matrices, such as the flavored oils included with ramen noodle kits. A general procedure was developed that is sensitive, quantitative, and reproducible for most of the phthalate esters. Optimization of this procedure is warranted based on the exact matrix to be processed. An example would be to adjust the extraction conditions for the beef oil in an effort to reduce matrix interference and increase extraction efficiency of the heavier phthalate esters. For non-homogenous samples, such as the beef oil, a technique should be employed to allow for better mixing. This will lead to more consistent aliquots to be taken for processing.

The use of internal standards is imperative to alleviate matrix issues that may exist with some types of oily matrices. More specific detection, such as MS/MS, may also help to eliminate matrix interference.