Detergents are amphipathic molecules that contain polar or charged hydrophilic groups (heads) at the end of long lipophilic hydrocarbon groups (tails) (Figure 1). They are also known as surfactants because they decrease the surface tension of water.

These structural characteristics allow detergents to aggregate in aqueous media. At a sufficiently high concentration, the polar hydrophilic region of each molecule is oriented toward the polar solute (water) while the hydrophobic regions are grouped together to form thermodynamically stable micelles with hydrophobic cores. The hydrophobic core region of the detergent micelle associates with the hydrophobic surfaces of proteins and results in soluble protein-detergent complexes. Figure 2 is a simple illustration of a micelle to demonstrate the orientation concept. Actual micelle structures are more complex and dynamic, and can change due to detergent concentration and solution composition.1 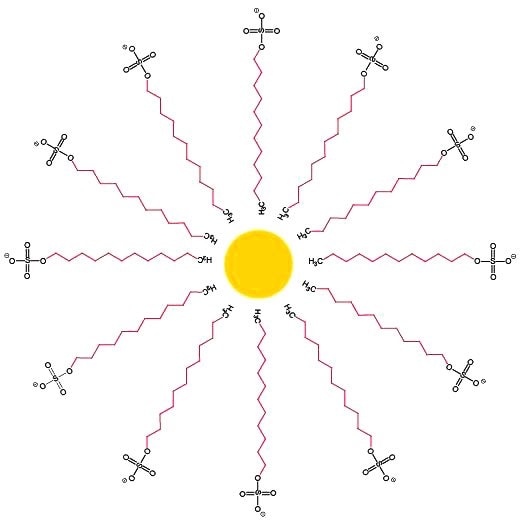 Biological detergents are commonly used to disrupt the bipolar lipid membrane of cells in order to release and solubilize membrane-bound proteins. Some detergents can be used to solubilize recombinant proteins, while others are recommended for the stabilization, crystallization, or denaturation of proteins. Detergents can align at aqueous/non-aqueous interfaces, resulting in reduced surface tension, increased miscibility, and stabilization of emulsions. Additional detergent applications include:

The concentration at which micelles begin to form is the critical micelle concentration (CMC). The CMC is the maximum monomer concentration and constitutes a measure of the free energy of micelle formation. The lower the CMC, the more stable the micelle and the more slowly molecules are incorporated into or removed from the micelle. The structure of the hydrophobic region of the detergent can affect the micelle structure. An increase in the length of the hydrophobic hydrocarbon chain of ionic detergents results in an increased micelle size and a lower CMC, as fewer molecules are needed to construct a micelle.

Ease of removal or exchange is an important factor in the selection of a detergent. Some of the more common detergent removal methods include:

The CMC value associated with the detergent is a useful guide to hydrophobic binding strength. Detergents with higher CMC values have weaker binding and are subsequently easier to remove by dialysis or displacement methods. Detergents with low CMC values require less detergent in order to form micelles and solubilize proteins or lipids.

The cloud point is the temperature at which the detergent solution near or above its CMC separates into two phases. The micelles aggregate, typically forming a cloudy phase with high detergent concentration, while the balance of the solution becomes detergent-depleted. The resulting two-phase solution can be separated, with the extracted protein being located in the detergent-rich phase. Detergents with low cloud point temperatures, such as TRITON® X-114 (cloud point ~23 °C) are recommended for use with proteins since high cloud point temperatures may denature solubilized proteins. The cloud point can be affected by changes in detergent concentration, temperature, and the addition of salt or polymers such as dextran and polyethylene glycol. Note that the detergent-rich phase is also contingent on the specific detergent(s) and salt concentration; under some conditions the phase may be clear rather than cloudy and be located as either the upper or lower phase of the solution. In non-ionic detergents, this behavior has been applied in the phase separation and purification of membrane proteins.2

When selecting a detergent, the first consideration is usually the form of the hydrophilic group.

Based on their structure, detergents can be broadly classified as:3

Ionic detergents contain anionic or cationic head groups and possess a net charge. Their hydrophobic tails are either straight hydrocarbon chains, as in sodium dodecyl sulfate (SDS) and cetyltrimethylammonium bromide (CTAB ), or rigid steroidal groups, as in bile acid salts.4 The size of an ionic detergent micelle is determined by the combined effect of hydrophobic attraction of the side chains and the repulsive forces of the ionic groups. Consequently, neutralizing the charge on the head group with increasing concentrations of a counter ion leads to a larger micellar size. Micellar size also increases with the increase in alkyl chain length. Ionic detergents are extremely effective in the solubilization of membrane proteins but are almost always denaturing to some extent.5

Bile acid salts are anionic detergents with backbones consisting of rigid steroidal groups, e.g., sodium salts of cholic acid and deoxycholic acid. Because of their planar structure, these molecules have a polar and a nonpolar face; as a result, their CMC’s are high and their micelles are small, which makes them easy to remove by dialysis.6 Bile acids are relatively mild detergents and are often less deactivating than linear-chain detergents with the same head group.7 Unconjugated bile acid monomers have pKa values of approximately 5 - 6 and limited solubility at low pH values. However, conjugation of bile acids reduces the pKa and leads to a larger fraction of ionized molecules at any given pH. Since the ionized salt form is more soluble in water than the protonated acid form, conjugation enhances solubility at a low pH.8

Non-ionic detergents contain uncharged, hydrophilic head groups that consist of either polyoxyethylene moieties, as in BRIJ® and TRITON™ Detergents, or glycosidic groups, as in octyl glucoside and dodecyl maltoside. Since non-ionic detergents break lipid-lipid and lipid-protein, but not protein-protein interactions, they are considered non-denaturing.9 Thus, they are widely used in the isolation of membrane proteins in their biologically active form. Unlike ionic detergents, salts have minimal effect on the micellar size of non-ionic detergents.5

Detergents with polyoxyethylene head groups may contain alkylpolyethylene ethers with the general formula CnH2n+1(OCH2CH2)xOH, or a phenyl ring between the alkyl chain and the ether group. TRITON™ X-100 detergent belongs to the latter class. It should be noted that detergents containing aromatic rings absorb in the ultraviolet region. They may interfere with spectrophotometric monitoring of proteins at 280 nm. Hydrogenated versions of these detergents are available, in which the aromatic rings are reduced to eliminate UV absorption. However, small amounts of unreacted material may be present in such reduced preparations. Alternatively, commercially available polyoxyethylene detergents with aliphatic hydrophobic moieties may be substituted for some aromatic polyoxyethylenes in certain applications. For example,

, TERGITOL™ TMN-10, polyoxyethylene 10 lauryl ether, and polyoxyethylene 10 tridecyl ether may be generally substituted for TRITON™ X-100 in applications where UV invisibility is important. These detergents possess aliphatic hydrophobic moieties and therefore do not absorb significantly in the ultraviolet region.

Although polyoxyethylenes have significant cost advantage over synthetic non-ionic detergents such as the alkyl glycosides, the latter remain the detergents of choice in many applications for two main reasons. First, they are homogeneous with respect to their composition and structure. Second, several variations of alkyl glycosides containing different combinations of the hydrocarbon chain and the polar sugar group can be easily synthesized in pure forms. Subtle differences in the physicochemical properties of alkyl glycosides bearing various alkyl chains, attached to a glucose, maltose, or a sucrose head group, can be exploited for selective solubilization of membrane proteins.10

Non-Detergent Sulfobetaines, NDSBs, are zwitterionic compounds. Like detergent sulfobetaines (SB) – such as linear SBs (e.g., SB 3-16, SB 3-10, 3-12 and 3-14),11 CHAPS12, and amidosulphobetaines (e.g., N-alkylamidopropyl-N,Ndimethylaminoalkyll- sulphonate)13 – NDSBs carry the sulfobetaine hydrophilic head group. However, in contrast to SBs, the hydrophobic groups in NDSBs are too short for micelle formation even at concentrations as high as 1 M. Hence, NDSBs can be easily removed by dialysis and they can readily diffuse in chromatography matrices and polyacrylamide gels for electrophoretic applications.

NDSBs were first employed in native isoelectric focusing experiments to screen electrostatic interactions without increasing the conductivity.14 Since then, they have found use in a wide range of applications including solubilization and crystallization of proteins14,15, as well as renaturation and refolding of chemically and thermally denatured proteins.16 Due to their short hydrophobic groups and chargescreening effect, NDSBs prevent aggregation and result in higher yields of membrane proteins. Furthermore, NDSBs do not interfere with enzymatic assays involving chromogenic substrates bearing nitrophenyl groups and they do not inhibit the activities of enzymes such as β-galactosidase and alkaline phosphatase.14 It is also noteworthy that NDSB-195, NDSB-211, and NDSB-221 do not absorb at 280 nm; therefore, they are compatible with protein purification procedures in which the protein concentrations are monitored by measuring absorbance at this wavelength.17

Guidelines for Choosing a Detergent