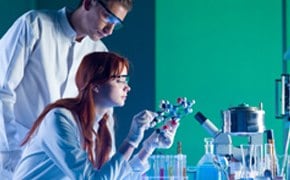 Bioconjugation involves ligating molecules together in which at least one of the reactants is a biomolecule, often an antibody, protein, or oligonucleotide. Bioconjugates are used for detection, assay, or targeting and tracking of biomolecules in the fields of biotechnology, medicine, and nanotechnology. Applications include attaching fluorescent probes to antibodies for flow cytometry and microscopy imaging, attaching antibodies to beads for immunoprecipitations, attaching antibodies to drugs for therapeutic development, and crosslinking of proteins to detect their biological interactions.

The dimensions or overall linear length of the target molecule before and after conjugation should be considered when choosing a crosslinker or modification reagent for the conjugation reaction. The spacer arm or cross-bridge of the reagent mainly determines the molecular length of the resulting compound. Crosslinkers of different sizes thus become molecular rulers for measuring the distances between functional groups in biomolecules.

It is important for the crosslinker to be cleavable if the interacting biomolecules need to be isolated and analyzed, e.g. a crosslinker used to detect protein-protein interactions. Alternatively, a non-cleavable linker could be used where stability is required, e.g. an antibody attached to a resin for protein capture.

In some applications, reagent hydrophobicity can be an advantage, especially when an application involves the penetration of cell membranes. Hydrophobic reagents without any strongly polar groups quickly pass through cell membranes to crosslink or label internal cell proteins. On the other hand, hydrophilic crosslinkers do not cause aggregation or precipitation of the interacting molecule and can lead to water solubility of antibodies and proteins modified by them. The use of hydrophilic bioconjugation reagents also results in greater biocompatibility.

The development journey of an antibody-drug conjugate (ADC) requires expertise in small and large molecule development, manufacturing, formulation and testing. Choosing an experienced partner, with these skills and the required containment facilities can help advance your ADC to market. ADCs are challenging molecules requiring advanced manufacturing suites and dedicated equipment to characterize the molecule and demonstrate its purity, homogeneity, and stability.

Click Chemistry Reagents
Our portfolio of click chemistry reagents includes a variety of azides, alkynes, catalysts, and ligands to accelerate your progress in chemical biology, polymer chemistry, bioconjugation, and drug discovery.
Crosslinkers
Our portfolio of linkers and crosslinkers provide structural stability and reliability in protein-protein, protein-peptide, and peptide/protein-small molecule interactions for all your bioconjugation needs.
Chemical Biology Tools
Our chemical biology tools incorporate techniques and strengths of chemistry to address fundamentally important research in biology, medicine, and drug discovery.
Amino Acids, Resins & Reagents for Peptide Synthesis
We offer an extensive range of amino acids, resins, and reagents of unparalleled quality, including Novabiochem®, for peptide synthesis, high-throughput organic chemistry, labeling peptides, and custom manufactured products.
NHC Ligands & Complexes
Our stable and tolerable NHC ligands and complexes can be used as efficient ancillary ligands to keep your work flowing in organometallic catalysis and catalysis chemistry research.
Coupling Reagents & Nucleosides
Our portfolio of building blocks, coupling reagents, and nucleosides provides a useful starting point for your oligo or nucleoside analog synthesis needs.
Protection/Deprotection Reagents
We offer efficient protection and deprotection reagents for site-selectivity control of functional group transformations in multi-step organic synthesis.
Polyethylene Glycol (PEGs and PEOs)
Discover our selection of polyethylene glycol (PEGs) and PEG derivatives in a wide range of molecular weights for all your PEGylation needs and applications.