HomeQuEChERS Sample Preparation MethodBanned and Other Neonicotinoids from Plant Material

Banned and Other Neonicotinoids from Plant Material 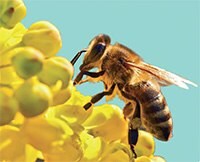 On Friday, April 27, 2018, representatives of the Member States of the European Union decided to ban the use of three products from the neonicotinoid family of insecticides as they have been deemed dangerous to bees when used on all outdoor crops. Proposed by the European Commission, the text concerns three neonicotinoids (clothianidin, imidacloprid, and thiamethoxam), whose use it had already partially restricted since December 2013. This time, the moratorium was not only expanded, but it was also generalized to include all field crops, leaving only greenhouse use permitted.

The application below demonstrates the extraction and clean up of these banned compounds and others of the neonicotinoid class from dandelion blossoms using the QuEChERS methodology.

For the QuEChERS approach, Supel™ QuE tubes were used for extraction (Acetate) and clean up (PSA/C18) prior to analysis of seven neonicotinoid pesticides. For the LC-MS analysis (Figure 1), an Ascentis® Express C18 Fused-Core® particle column was chosen to achieve high efficiency at relatively low back pressure compared to sub-2 micron UHPLC columns. 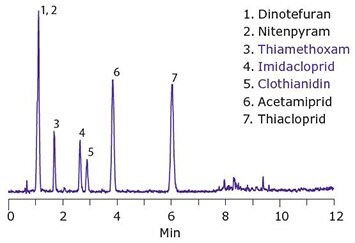