Tea is second only to water as the most popular beverage worldwide. All teas come from the leaves of the same plant, camellia sinensis. The various types of tea arise from differences in how and where the plants are grown, and how the leaves are processed. Green tea is produced by a quick drying of leaves after they are harvested. This stops the oxidation process that starts once they are picked. By comparison, black tea leaves are allowed to oxidize fully, producing a beverage with more robust flavor and higher caffeine content.1 The consumption of green tea is associated with health benefits such as reduced risk of heart disease and several types of cancers. This is due primarily to its antioxidant properties, which are a result of catechins. These compounds have been found to be more effective than other antioxidants such as vitamins C and E at stopping oxidative cell damage.2

Owing to its popularity, tea is considered to be a major agricultural commodity around the world, with 4.8 million tons produced in 2012.3 The mass production of tea often uses pesticides to maximize crop yield, making exposure to these chemicals a concern for those who consume it. Thus, testing for pesticide residues is required by many countries which import tea. These countries include the United States, Canada, Australia, Japan, and those in the European Union (EU). The requirements for maximum residue limits (MRLs) are different for each of these countries, with those established by the EU the lowest among tea importing countries; ranging from 0.05 to 50 mg/kg, depending on the pesticide.3 Meeting these MRLs creates a challenge for analytical laboratories doing pesticide residue testing of tea. This is due to the high levels of background that is co-extracted along with the pesticides. These compounds can include pigments, sugars, polyphenols, and alkaloids; and these can interfere with chromatographic analysis. For tea extracts, common cleanups include the use of QuEChERS with primary-secondary amine (PSA), C18 and graphitized carbon black (GCB), and SPE with dual-layer cartridges containing GCB.4,5,6 GCB effectively removes green pigments, but will also retain any target pesticides with planar structures. In the case of QuEChERS cleanup with GCB, recoveries of these planar pesticides are often reduced. If cleanup is done using a dual-layer SPE cartridge, toluene can be added to the elution solvent in order to recover these compounds. While having toluene present in the final extract is compatible with injection into a GC system, a solvent exchange must be done prior to HPLC analysis.

In this application, a new SPE cartridge, the Supelclean™ Ultra 2400, was used in the cleanup of QuEChERS extracts of green tea. Supelclean™ Ultra 2400 is a small volume dual-layer SPE cartridge designed for cleanup of high background samples such as dry commodities (tea, coffee and spices). It contains a mixture of carbon/ PSA/C18 in the top layer, and Z-Sep in the bottom layer. The carbon, Graphsphere™ 2031, is engineered to reduce pigmentation and increase recovery of planar pesticides without the need for toluene in the elution solvent. The Z-Sep in the bottom layer provides removal of oils and fatty components, and also provides additional reduction in pigmentation. The small size of the cartridge (which is available in 1 and 3 mL) was designed to provide sufficient cleanup while reducing solvent usage.

In this study, green tea was spiked at 5 and 50 ng/g and extracted using QuEChERS. Cleanup using a 1 mL Supelclean™ Ultra 2400 cartridge was then compared with QuEChERS cleanup using PSA/ C18/GCB. The final extracts were analyzed by LC/MS/MS and GC/ MS/MS. Performance of the cleanups was compared with regards to background and pesticide recoveries.

Organic green tea was obtained from a local grocery store and ground into a fine powder prior to use. Samples were spiked at 5 ng/g and 50 ng/g and extracted using the procedure shown in Figure 1. Samples were cleaned using the Supelclean™ Ultra 2400 SPE cartridge and PSA/C18/ GCB, as indicated in Figure 2. 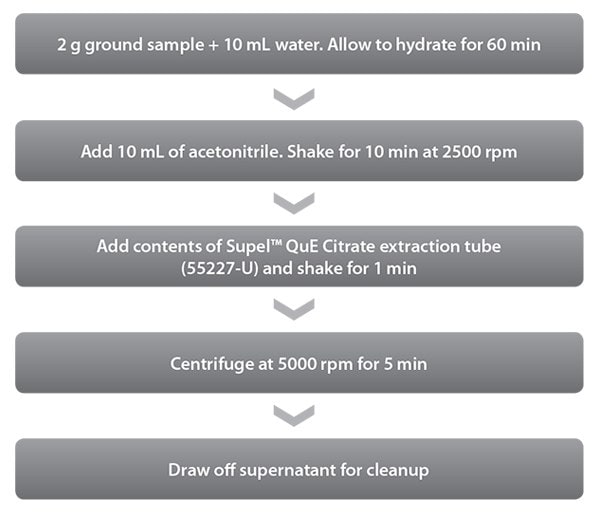 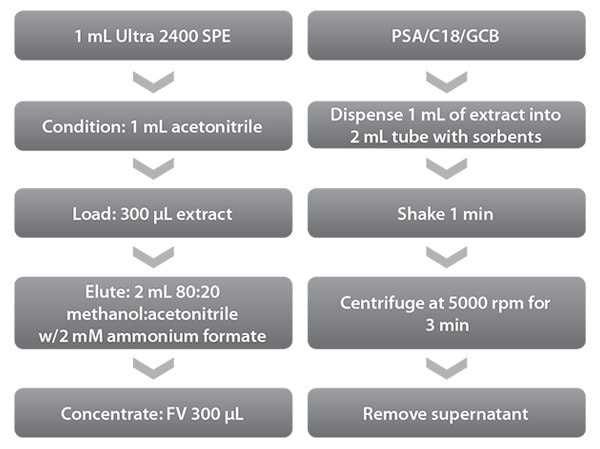 Spiked replicates and blanks were prepared using each cleanup. Samples were analyzed against matrix-matched 5-point calibration curves from 0.5-10 ng/mL with separate sets prepared for each cleanup. For both cleanups, the same sample extracts were analyzed by both LC/MS/MS and GC/MS/MS. The analysis conditions are shown in Tables 1 and 2, as well as 3 and 4, respectively.

Background – After cleanup, extracts cleaned with Supelclean™ Ultra 2400 had slightly less color than those cleaned with PSA/C18/GCB (Figure 3). GC/MS scan runs of each extract (Figure 4) show the least amount of background present in the sample cleaned with Ultra 2400. The Ultra cartridge removed more polyphenols (peaks eluting between 10–20 min) than the PSA/C18/GCB; however, caffeine (large peak at 20 min) was still present in both extracts. At the 5 ng/g spiking level, background was more prevalent, and more interference was noted in the PSA/C18/GCB than the Ultra 2400 cleaned samples, especially in GC/MS/MS analysis. An example of this is shown in Figure 5 for γ-cyhalothrin. 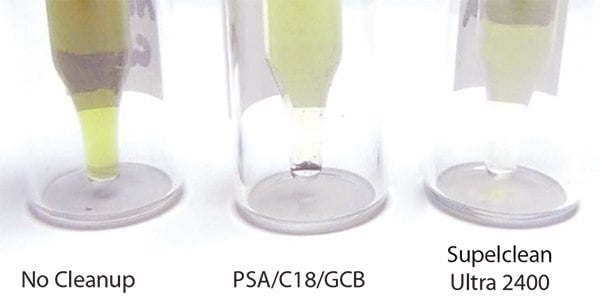 Figure 3.QuEChERS Extracts of Green Tea (Undiluted), Before and After Cleanup 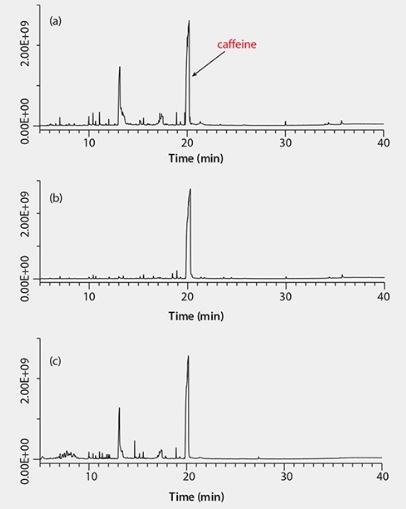 Pesticide Recovery – A summary and comparison of the pesticide recoveries and reproducibilities obtained at both spiking levels is presented in Table 5 and Figure 6. Overall, at both spiking levels, performance was better using Ultra 2400 than PSA/C18/GCB for cleanup. Using Ultra 2400 cleanup, a greater number of pesticides could be quantitated, and were within 70–120% recovery with RSD <20% for spiked replicates. Figure 6.Comparison of Cleanup Performance for Pesticide Residue Analysis from Spiked Green Tea (a total of 41 pesticides were analyzed)

At 5 ng/g, acephate and spirodiclofen could not be detected after either cleanup. As indicated in Table 5, several pesticides could not be quantitated after PSA/C18/GCB cleanup due to matrix. Captan could not be analyzed at either 5 or 50 ng/g due to matrix. The tetronic acid and tetramic pesticides (spirodiclofen, spiromesifen, spirotetramat), and the spinosads (spinosyn A&D) had lower recoveries from PSA/C18/ GCB at both spiking levels compared to Ultra 2400. It is suspected that this is due to retention of these compounds on the GCB, since several of these compounds have planar components to their structures and/ or are very large in size. Quinoxyfen, another pesticide with a planar element to its structure, had >70% recovery at both spiking levels after cleanup with Ultra 2400, but recovery of < 60% using PSA/C18/GCB.

*avg. of 2 replicates
ND: not detected

Using QuEChERS for extraction of pesticide residues from green tea produces an extract with high background which contains pigments, polyphenolics, and caffeine. For cleanup of this sample, Ultra 2400 SPE resulted in lower background than QuEChERS cleanup using PSA/C18/GCB. This was evidenced by extract color, GC/MS-scan background, and GC/MS/MS data. While neither cleanup was able to retain caffeine, the Ultra 2400 cartridge removed as much pigment and more polyphenolics than PSA/C18/GCB. For pesticide recovery, Ultra 2400 performed better than PSA/C18/GCB, especially for the 5 ng/g spiking level, at which 73% of the 41 pesticides tested had recoveries in the range of 70–120%, compared to 20% for PSA/C18/ GCB. At a higher spiking level of 50 ng/g, the Ultra 2400 cleanup still yielded better results than PSA/C18/GCB, with 95% of the pesticides within acceptable recovery and reproducibility ranges, vs. 83% for the later cleanup.

In summary, in the cleanup of green tea extracts, Supelclean™ Ultra 2400 SPE was found to provide lower background than QuEChERS cleanup using PSA/C18/GCB. This allowed for the analysis of more pesticides at lower levels. The small size of the cartridge offers an advantage over larger, 6 mL dual-layer cartridges containing GCB in that it uses less solvent, and does not require the use of toluene in the elution solvent.