Organoids are complex, multicellular 3-dimensional in vitro cell models used in biomedical research that closely mimic in vivo organs. Hans Clevers, the pioneer of organoid biology at the Hubrecht Institute, first demonstrated in 2009 that a single LGR5+ expressing intestinal stem cell could self-organize into crypt-villus structures similar to the adult intestine. Since then, organoids have been derived from numerous tissues including but not limited to brain, colon, kidney, liver, pancreas, lung, and tumor biopsies. 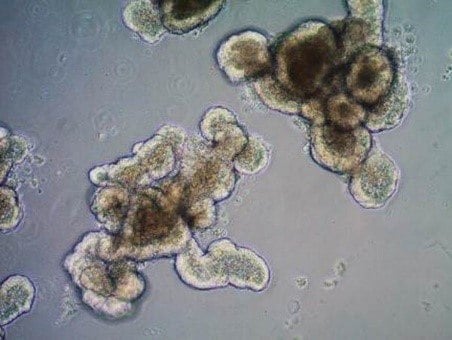 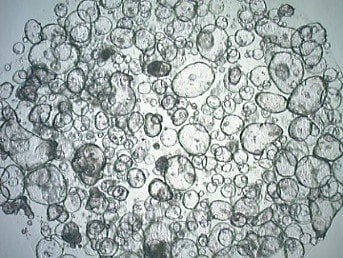 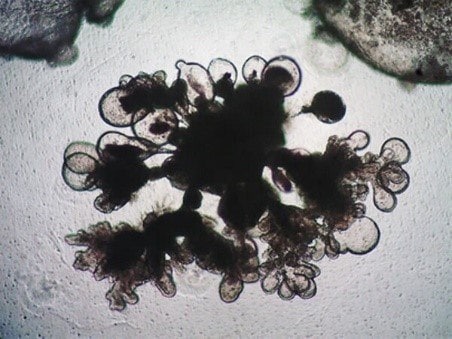 What is an Organoid Biobank?

To address personalized medical research applications, biobanks of human organoids have been generated from various tissues containing a wide range of cellular and molecular phenotypes. For example, establishing a collection of normal and diseased gastrointestinal organoids has aided in the research of colon cancer and other GI related diseases such as Crohn’s, irritable bowel syndrome (IBS), and ulcerative colitis.

Figure 2.Isolation and cryopreservation of patient-derived organoids (PDOs) can be used to generate organoid biobanks.

What is the Difference between Organoids and Spheroids? 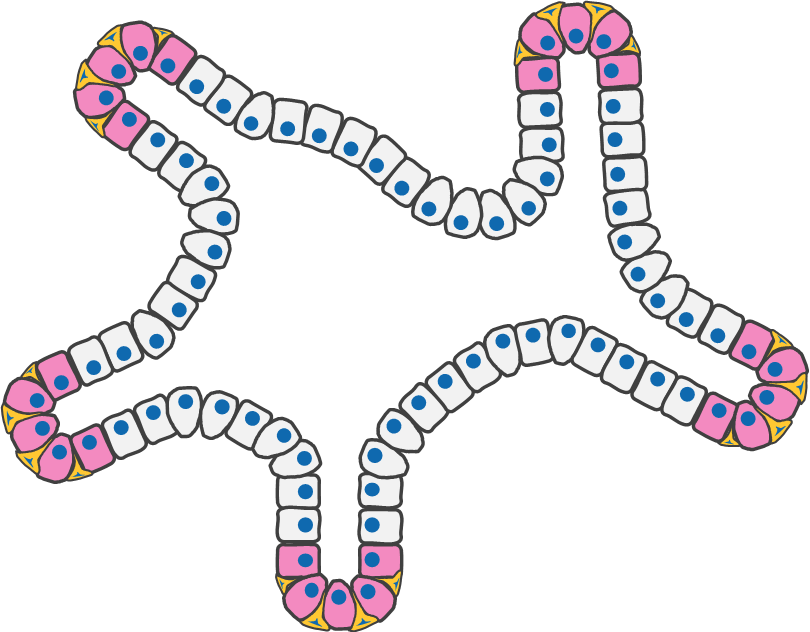 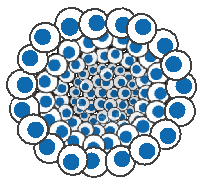 How are Organoids Generated?

How are Tumor Organoids used in Cancer Research?

Patient-derived organoids can be established from both healthy and tumor tissue biopsies. Tumor organoids (tumoroids) have been shown to retain key genetic and phenotypic characteristics of their tissue of origin and tumor subtype while maintaining intra-tumoral heterogeneity. Recently, tumor PDOs have been used as an in vitro predictor of chemotherapeutic treatment response, demonstrating the importance of these models in identifying new anti-cancer treatments through drug screening. 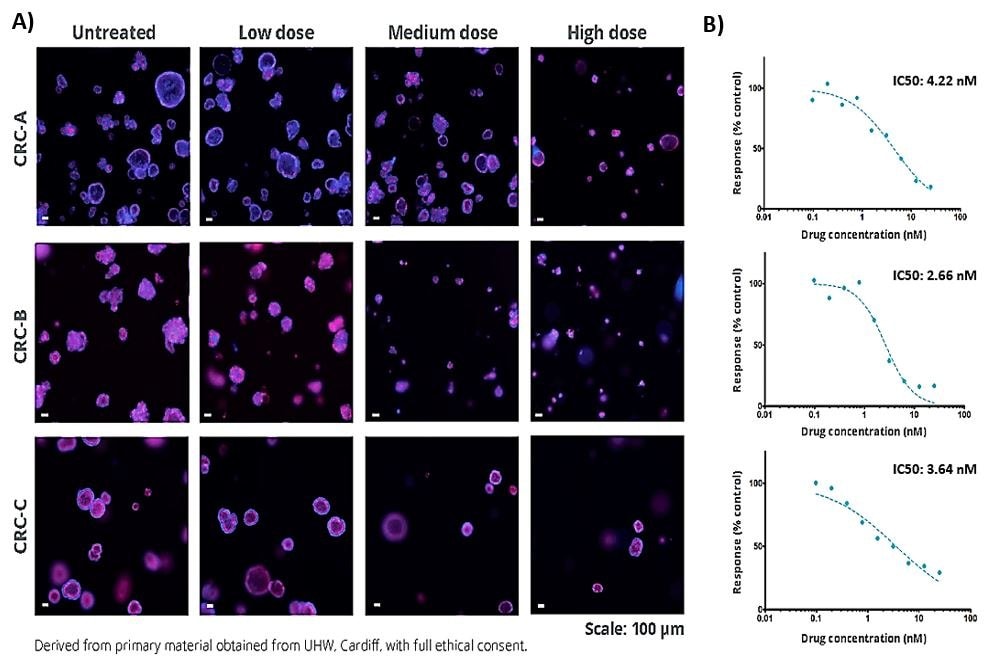 How are Organoids Cultured?

Once isolated, organoids are cultured in specialized media embedded in a rich extracellular matrix (ECM) basement membrane extract hydrogel such as Growth Factor Reduced Matrigel. Media is replenished every other day and cells are passaged once per week (7-12 days) before cells become too large or necrotic. Cells can be passaged in either small clump fragments or as single cells using mechanical dissociation/enzyme-free passaging reagents. Depending on organoid type and confluency, split ratios of roughly 1:3-1:4 can be used when passaging organoids. For sensitive organoid types, ROCKi (Y27632) (SCM075) can be added during passaging to help in promoting cell viability.

Is Matrigel Required for Organoid Culture?

Yes, Matrigel is essential to promote proper growth of organoids. The Matrigel matrix provides the necessary chemical signaling cytokines and structural ECM proteins required to mimic the natural in vivo 3D environment. Matrigel is often used in an undiluted format (8 mg/mL or higher) to create the Matrigel domes used to culture organoids. Recently, higher throughput suspension cultures of organoids have been generated by adding diluted Matrigel to the media rather than utilizing Matrigel domes.

What are Matrigel Domes?

The dome-based method for growing organoids involves seeding organoid fragments within a single drop of Matrigel ECM and allowing polymerization. Once the Matrigel ECM polymerizes, media is added to the well on top of the dome. One Matrigel dome is typically seeded per well. 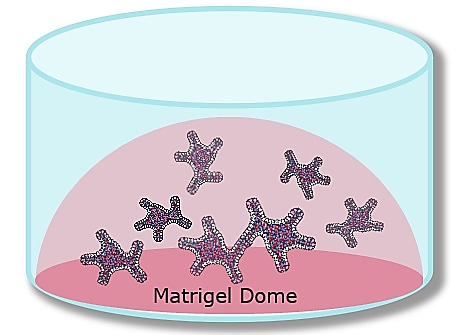 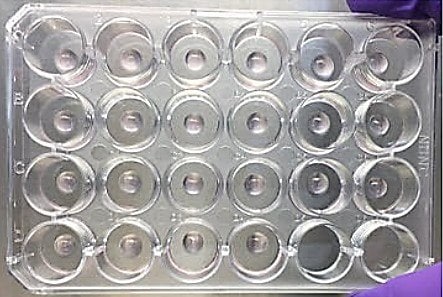 How do you Remove Matrigel from Organoid Cultures?

Matrigel can be removed during passaging through centrifugation at 1100 rpm for 5 minutes. After centrifugation, a thin layer of Matrigel visible above the organoid cell pellet can be carefully aspirated. Organoids should be washed with media or PBS and centrifuged again to remove any additional Matrigel. Additionally, Corning® Cell Recovery Solution can be used to recover organoids from Matrigel domes.

What Media or Supplements are Required for Organoids?

How Long can Organoids be Expanded in Culture?

Most organoids can be expanded indefinitely if the LGR5+ stem cell population is maintained using proper media and passaging techniques. It is recommended to perform marker expression and karyotype analysis every 5-10 passages to ensure organoid quality and identity.

How Do you Passage Organoids?

Organoids can be passaged in either small clump fragments or single cells using mechanical dissociation or enzyme-free passaging reagents.

Can you Freeze or Cryopreserve Organoids?

Yes. Depending on the organoid cell type, optimized organoid cell freezing media (SCM301) can be used to cryopreserve organoids. Many patient-derived organoid types can be cryopreserved. However, some iPSC-derived mature organoid cell types such as lung organoids can’t be frozen successfully. Organoids should be pretreated with ROCKi (Y27632) (SCM075) before freezing to help promote cell viability. We recommend freezing 5-10 Matrigel domes into 1 cryovial using a controlled Mr. Frosty freezing container. The average organoid density of each dome should be ~90% at the time of freezing to ensure the highest cell viability.

How Do you Stain Organoids with Antibodies?

Organoids can be stained with antibodies for immunocytochemical (ICC)/Immunohistochemical (IHC) analysis using either whole-mount or paraffin embedding/sectioning techniques. It is critical to use antibodies prequalified for organoid analysis.

How Do you Extract RNA/DNA from Organoids in Cultured in Matrigel?

Traditional DNA/RNA isolation kits can be used to prepare genomic material for sequencing (RNA-seq, scRNA-seq, WGS, CHIP-seq etc). For some applications with large organoids, tissue specific DNA/RNA extraction kits are recommended. TRI Reagent (T9424) can be added to the dissociated organoids before RNA extraction and can be stored at -80 °C until future use.

Are Specialized Assays Required for Organoids?

Due to the variable nature of organoids, most traditional assays require further experimental optimization. For example, the common Live Dead Cell Viability Assay (CBA415) has been optimized for 3D cultures including organoids. The assay relies upon Calcein-AM (live cells), Propidium Iodide (dead cells) and Hoechst 33342 (all cells). Another common organoid assay is the Forskolin-Induced Organoid Swelling Assay that measures CFTR function.

How Do you Perform a Cell Toxicity Assay Using Organoids?

In order to analyze the cytotoxic effects of drug compounds, luciferase-based assays that measure ATP such as the Cell Viability Luciferase Assay (SCT149) or CellTiter-Glo® 3D Cell Viability Assays are often used on organoid cultures.

How Do you Reduce Variation in Organoid Cultures?

Some organoid cells types, such human colon organoids, can be single cell passaged using TrypLE Express dissociation reagents. Seeding equivalent numbers of organoids per well produces more uniform organoid cultures than traditional mechanical or enzymatic clump passaging techniques. When single cell passaging, it is critical to add ROCKi Y27632 (SCM075) at a final concentration of 10 μM to the media to maintain cell viability. Another technique to reduce assay variability is to manually remove organoids with abnormal morphologies while maintain organoids of similar sizes.

Where Can I Purchase Ethically Sourced Human Organoids?