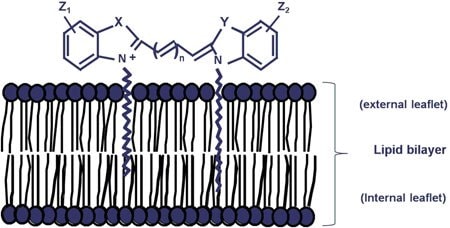 When using the salt-free Diluent C vehicle, provided with our cell linker kits to maximize staining efficiency and homogeneity, partitioning of these highly lipophilic dyes into cell membranes occurs almost instantly upon mixing with cells. As illustrated in this schematic for labeling with PKH67, bright, uniform and reproducible staining is most readily obtained by: 1) minimizing the amount of salts present in the staining step and 2) insuring rapid homogeneous dispersal of cells in dye. (For detailed methods and staining protocols, see Refs. 2 and 3 and links to individual product bulletins included in Table S2.) 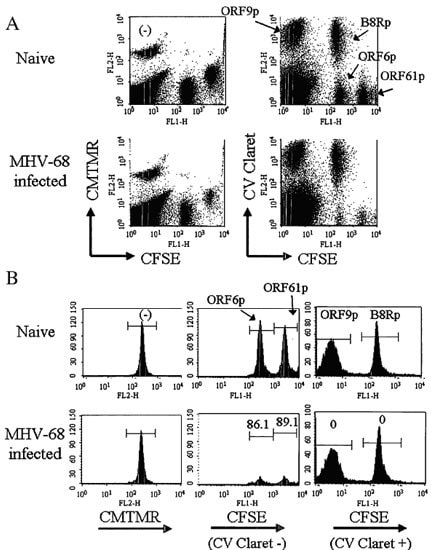 Unpulsed splenocytes or splenocytes pulsed with 1 of 4 immunogenic MHV-68 peptides for 1 h @ 37 °C. were labeled with distinct 1 or 2-color combinations of 3 different cell tracking dyes. Single staining with CMTMR identified unpulsed splenocytes, whereas peptide-pulsed splenocytes were labeled with combinations of CellVue Claret and CFSE. The 5 labeled target populations were then admixed in equal numbers, injected into naïve mice or mice that had been infected with MHV-68 virus 10 days prior (3 per group), and spleens were harvested 4 hours post-injection. After red cell lysis, the frequency of viable targets in each population was assessed by flow cytometry, using light scatter gating to exclude debris and aggregates and 7-AAD uptake to exclude non-viable cells. [NOTE: Although the peptides shown here were candidate epitopes for an antiviral vaccine, a similar strategy could be applied to identification of efficacious anti-tumor vaccine components.]