In principle, the seemingly simple formation of a peptide bond can be accomplished using all the procedures available in organic chemistry for the synthesis of carboxylic acid amides. However, due to the presence of various functional groups in natural and unnatural amino acids and particularly the requirement for full retention of chiral integrity, the coupling of amino acids and peptides under mild conditions can be challenging. A plethora of coupling reagents has been developed superseding each other in efficiency and suitability for specific applications (e.g., solid-phase peptide synthesis or fragment condensation).

All coupling methods have the same reaction principle in common: after activation of the carboxy group of the first amino acid, the second amino acid can form the peptide bond by a nucleophilic attack of its amino group. In order to prevent uncontrolled peptide bond formation the amino group of the first amino acid and all functional side chain groups need to be reversibly blocked. Repeated de-blocking, activation, and coupling build the peptide to its desired final sequence.

A broad variety of coupling reagents available in our catalog will be presented and discussed. For further reading, several detailed reviews are available.1,2

Propylphosphonic anhydride (T3P®)3 is a very efficient, nontoxic coupling reagent especially suited for connecting sterically hindered amino acids. A further advantage is the easy removal of byproducts by extraction of the crude product with water.4

Mukaiyama introduced pyridinium reagents like 2-chloromethylpyridinium iodide to peptide chemistry, which found application in the synthesis of a b-lactam carbacepham skeleton.5

Cyanuric chloride has been used for the preparation of acyl chlorides, amides and peptides. The cyanuric chloride derivative CDMT (2-chloro-4,6-dimethoxy-1,3,5-triazine) yields highly reactive esters with carboxylic acids that can then be used as powerful acylating agents for amines and the less nucleophilic, alcohols.6 The activation is performed in presence of a base, preferentially NMM (N-methylmorpholine). In situ NMM and CDMT form the intermediate DMTMM. DMTMM can be isolated and used as coupling reagent independently.7 In contrast to CDMT, DMTMM does not require pre-activation of the carboxylic acid. The coupling efficiency of DMTMM in SPPS was found to be comparable to PyBOP while racemization could be kept below the detection limit.8

Scheme 2.Reaction of CDMT with NMM to the powerful acylating agent DMTMM.

The most popular in-situ condensing agents are the carbodiimides.9-11 The reaction of a carboxylic acid with a carbodiimide is believed to involve a labile O-acylisourea (figure). 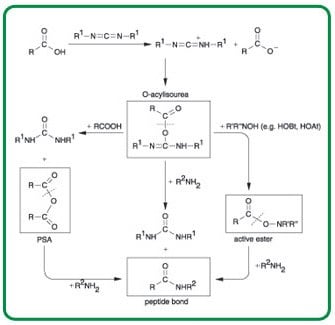 N,N4-dicyclohexylcarbodiimide (DCC) is extensively used in Boc/Bzl-peptide synthesis, because the dicyclohexylurea (DCU) by-product is easily removed from the reaction vessel in presence of trifluoroacetic acid during the Boc-deprotection protocol. In the Fmoc/t-Bu chemistry, diisopropylcarbodiimide gives rise to a more DMF-soluble urea by-product and is therefore highly recommended.12,13 N-(3-dimethylaminopropyl)-N'-ethylcarbodiimide hydrochloride (WSC, EDC) is widely used in solution phase, as it generates a urea by-product which can be easily removed from the reaction medium by extraction with water.14,15

Another important water-soluble carbodiimide is N-cyclohexyl-N'-(2-morpholinoethyl)carbodiimide-methyl-p-toluenesulfonate (CMC).16,17 A major drawback of the cabodiimide procedure is the dehydration of side-chain carboxamides of Asn- and Gln-residues to the corresponding nitriles. This problem is completely avoided when using carbodiimides in combination with additives like hydroxylamine derivatives, such as 1-hydroxybenzotriazole (HOBt)10 or 7-aza-1-hydroxybenzotriazole (HOAt).19-21 These additives lead to an efficient suppression of racemization and total exclusion of dehydration of carboxamide residues while generating highly active ester species. Carbodiimide-mediated activation is achieved without base catalysis otherwise responsible for considerable rates of racemization in sensitive Fmoc-Cys(Trt)-OH residue.22,23