Kits and Reagents for Glycoprotein Analysis

These glycosaminoglycans (GAGs) are complex heterogeneous mixtures of repeating disaccharide units consisting of a uronic acid (D-glucuronic or L-iduronic acid) and D-glucosamine or N-acetyl-D-glucosamine. Various degrees of sulfation occur (at O and/or N) on each monosacchiride unit, ranging from zero to tri-sulfation. In general, heparan is less sulfated than heparin.

Heparinase selectively cleaves sulfated glycans containing α(1-4) glycosidic linkages between the glucosamine and uronic acid residues in the heparin polymer. The cleavage proceeds via an elimination reaction, resulting in the formation of oligosaccharides containing unsaturated uronic acid residues (double bond between C4 and C5). These cleavage products can be detected by UV spectroscopy (232 nm).

The three forms of heparinase (I, II, and III) have varying substrate specificities, as follows:

Heparinase I cleaves heparin and heparan sulfate (relative activity about 3:1) at the linkages between hexosamines and O-sulfated iduronic acids, yielding mainly disaccharides. The enzyme also cleaves the antithrombin III binding pentasaccharide domain in the heparin molecule.

from Flavobacterium heparinum
Product No. H2519

Heparinase II cleaves heparan sulfate, and to a lesser extent heparin (relative activity about 2:1), at the 1-4 linkages between hexosamines and uronic acid residues (both glucuronic and iduronic), yielding mainly disaccharides.
The lyase activity of Heparinase II had been previously characterized as 'heparitinase II' by Silva, M.E., and Dietrich, C.P.

from Flavobacterium heparinum
Product No. H6512

Heparinase III
Heparinase III cleaves at the 1-4 linkages between hexosamine and glucuronic acid residues in heparan sulfate, yielding mainly disaccharides. The enzyme is not active towards heparin or low molecular weight heparins.
The lyase activity of Heparinase III had been previously characterized as 'heparitinase I' by Silva, M.E., and Dietrich, C.P.

from Flavobacterium heparinum
Product No. H8891

The mammalian hyaluronidases (EC# 3.2.1.35) cleave hyaluronic acid and similar glycosaminoglycans by hydrolysis. The enzyme from Streptomyces (EC# 4.2.2.1) is a lyase that catalyzes cleavage by an elimination reaction yielding a 4-deoxy-4,5-unsaturated oligosaccharides. It’s specificity towards chondroitins and other glycosaminoglycans is unclear.

Prior to 2008 we utilized the Hyaluronidase assay procedure described in the USP (United States Pharmacopoeia XXIII-National Formulary XVIII Combined Edition). The unit activity was defined using a USP standardized hyaluronidase enzyme. This unit was defined as: One unit is based on the change in absorbance at 600 nm (change in turbidity) of a USP reference standard hyaluronidase which is assayed concurrently with each lot of this product.

The USP no longer offers a standardized hyaluronidase enzyme. We have modified the assay method and unit definition to accommodate this unavoidable change. The new unit definition is: One unit will cause a change in A600nm of 0.330 per minute at pH 5.7 at 37 ºC (45 minute assay).

Cleaves hyaluronic acid at the β-D-GalNAc-(1-4)-β-D-GlcA bond, ultimately breaking the polysaccharide down to 3-(4-deoxy-β-D-gluc-4-enuronosyl)-N-acetyl-D-glucosamine

from Streptomyces hyaluronolyticus
Product No. H1136 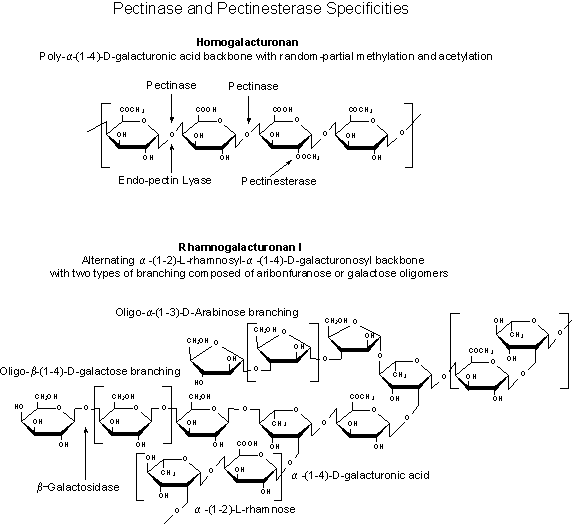 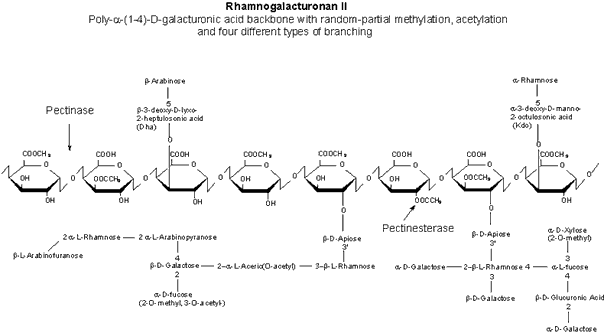 Pectin
Pectins are complex branched heteropolysaccharides primarily containing an α-(1-4) polygalacturonic acid backbone which can be randomly acetylated and methylated. Three different pectins have been isolated from plant cell walls.

Pectinase catalyzes the random hydrolysis of 1,4-α-D-galactosiduronic linkages in pectin and other galacturonans.

Pectolyase catalyzes the eliminative cleavage of (1 4)-α-D-galacturonan methyl ester to give oligosaccharides with 4-deoxy-6-O-methyl- α-D-galact-4-enuronosyl groups at their non-reducing ends. Pectinase catalyzes the random hydrolysis of 1,4-α-D-galactosiduronic linkages in pectin and other galacturonans.

Pectinesterase catalyzes the hydrolysis of the methyl esters of pectin to yield pectate and methanol. Polymer of β-(1-4)-N-Acetyl-D-glucosamine units. Alternating residues are modified to form N-acetylmuramic acid with the addition of lactate to form branching links to the tetrapeptide.