Differentiation of Escherichia coli from coliforms

Escherichia coli and coliforms are important indicator organisms for hygiene status. A broad range of biochemical tests is available for differentiation and identification of these organisms.

In August 2008, the discovery of E. coli-contaminated beef in the United States prompted a nationwide recall of beef. The source turned out to be one supplier that had a history of contamination of its beef products. The usual sources of E. coli in beef are faeces-contaminated animal carcasses, water supply, and/or other hygiene problems. Even in Switzerland, where drinking water is unusually pure, there are rare cases of faecal contamination by liquid manure. Detection is critical to maintaining hygiene.

E. coli is an aerobe, rod-shaped, motile, Gram-negative intestinal bacterium that ferments lactose and diverse other carbohydrates (Table 3). Detection is possible because the bacterium ferments dextrose (D-glucose) by producing mixed acids (e.g. lactic, acetic and formic acids) that can then be made visible with the addition of the indicator methyl red. There are many other methods of detection to indicate the presence of E. coli. For instance, Voges and Proskauer found a test to detect acetoin and 2,3-butanediol produced when Klebsiella and Enterobacter ferment glucose. The researchers found that under alkaline conditions, these two compounds oxidize themselves into diacetyl. Diacetyl then reacts with creatine (a guanidine derivative) and appears as a pinkish-red compound, or it reacts with a-naphtol and appears cherry-red in colour.

Some other characteristic enzymes can also be detected by their interactions. Tryptophanase cleaves Tryptophan into pyruvate, indol, and ammonia; by using reagents (Kovac’s and DMCA), researchers can detect indole production (Figure 1). ß-Galactosidase is detected with ONPG (2-Nitrophenyl ß-D-galactopyranoside), a chromogenic substrate that turns yellow after cleavage has occurred. Further, the ability to reduce nitrate to nitrite can be detected with the addition of sulphanilic acid and a-naphthylamine, which results in a red precipitate (prontosil). Finally, lysine is degraded by E. coli to cadaverine by the lysine decarboxylase. Because this is an alkaline reaction, the indicator (bromocresol purple) will change colour from yellow to purple. 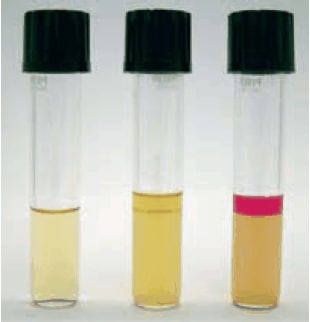 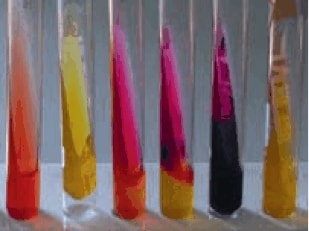 Figure 2.TSI Agar: From the left,we see the medium without organisms, followed by an extreme reaction in the butt of the tube and on the slant surface; the second tube fromleft shows the typical reaction when E. coli organisms are present.

Interesting differentiation results are obtained with the inoculation of TSI Agar slants. Due to the formation of acid during fermentation of lactose, sucrose and glucose, the pH level usually drops. However, in the case of oxidative decarboxylation of peptone alkaline products, the pH rises. This increase is indicated by phenol red, which changes colour in acidic surroundings from red-orange to yellow; upon alkalinisation, it turns deep red. E. coli shows an acid reaction (yellow) and gas formation in the butt of the test tube and an acid reaction (yellow) on the slant surface.

An overview of the important biochemical reactions of E. coli is included in Table 1. Sigma-Aldrich products available for differentiation are listed in Tables 2 and 3.