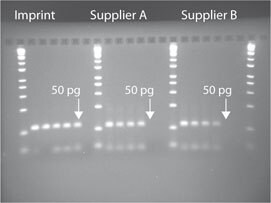 Figure 1.Superior Sensitivity. Bisulfite modification was performed on decreasing concentrations of human genomic DNA using Imprint (Cat. No. MOD50) and kits from two other suppliers. Methylation-specific PCR (MSP) was then performed on all samples using ß-actin gene-specific primers (109 bp amplicon). For all suppliers lanes from left to right are 100 ng, 10 ng, 1 ng, 100 pg, 50 pg, and no sample, respectively. Suppliers C and D (not shown) have no product at 50 pg. These results demonstrate the superior sensitivity of the Imprint kit relative to other suppliers. 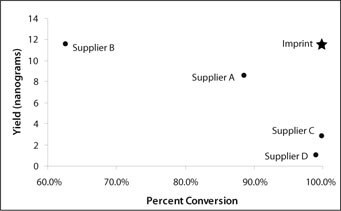 Figure 2.Best-in-Class Yield and Conversion (MOD50). 100 ng of human genomic DNA was bisulfite treated according to each supplier’s protocol followed by qPCR analysis. The modified and unmodified primer sets within the ß-actin gene were then used to determine bisulfite yield. Ct values were compared to the Ct value of a 10-ng human genomic standard. Percent conversion was determined after busulfite modification of 100 ng of human genomic DNA. Comparison of qPCR delta Ct values between modified and unmodified primers within ß-actin demonstrates conversion rates. The graph above highlights the superior yield and conversion rates of the Imprint kit in relation to other suppliers. Bisulfite sequencing can also be performed after chromatin immunoprecipitation (ChIP-BS), which could be useful for examining DNA methylation status in combination with histone modification on a relatively large scale.