Increasing fuel costs and concerns about greenhouse gas emissions have spurred the growth in sales of hybrid electric vehicles (HEVs) that carry a battery pack to supplement the performance of the internal combustion engine (ICE). The next generation of hybrid electric vehicles, plug-in hybrid electric vehicles (PHEVs), will have the ability to recharge their energy storage system with electricity from a standard electric outlet. The key advantage of PHEVs is that they can use this stored electrical energy to propel the vehicle, meeting between 10 and 40 miles of urban driving needs with virtually no gasoline use, thus reducing petroleum consumption by the combustion engine. However, batteries used in today’s power-assist HEVs do not have sufficient energy storage capability to meet the requirements of these advanced vehicles. The DOE, in partnership with the U.S. Advanced Battery Consortium (USABC, a partnership involving the three major domestic automakers formed to develop electrochemical energy storage technologies for fuel cell, hybrid, and electric vehicles), has been developing lithium rechargeable battery technology for several years. These efforts have resulted in significant improvements in the performance, life, and abuse resistance of batteries for vehicle applications.

The DOE, through its national laboratories has conducted vehicle analyses and battery sizing studies to recommend battery performance requirements for use by the USABC when soliciting proposals from potential battery developers and for benchmarking progress in the various development programs.1 These analyses have shown that the energy storage requirements for PHEVs depend on the vehicle platform, vehicle performance on various drive cycles, hybrid configuration, operating strategy, and all-electric range capability, i.e., the total miles that can be driven using the stored energy. Battery performance requirements for vehicles with an all-electric range of 10 and 40 miles (PHEV 10 and PHEV 40) are summarized in Table 1.

The major goal of the materials-related research is to develop cell materials with increased energy density. Such new materials would result in batteries with fewer cells, less active and supportive materials, less cell and battery hardware, lower weight, lower volume, and, of course, reduced cost. Figure 1 shows the progression from today’s Li-ion chemistries to those that are being developed in the Energy Storage Program for future generations of PHEVs. These activities are described in the following sections. 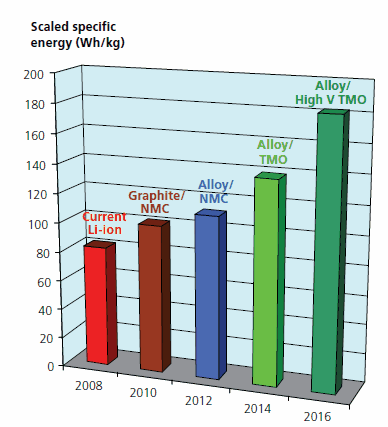 Lithium metal is an attractive material for batteries due to its lightweight, high voltage, high electrochemical capacity per unit weight, and good conductivity (220914). Development of high-energy primary (non-rechargeable) batteries using lithium anodes started in the 1960’s and these batteries were first used in the 1970’s for military applications. Today these batteries are used in a variety of applications, including calculators, watches, cameras, memory backup circuits, etc.

Development of rechargeable batteries with lithium metal anodes started in the early 1980’s. A number of rechargeable battery chemistries were developed, but due to persistent life and safety problems none achieved commercial success. These problems arise from lithium’s reactivity with the electrolyte and its tendency to form mossy and sometimes dendritic deposits when recharged. These deposits lead to cell failures when the dendrites penetrate the separator and cause internal short circuits.

These problems were circumvented with the introduction of lithium-ion batteries (sometimes abbreviated Li-ion) in the early 1990s. These batteries contain no metallic lithium but instead rely on the transfer of lithium ions between the anode (negative electrode) and cathode (positive electrode), as illustrated in Figure 2. When the cell is charged, lithium ions are inserted or intercalated into the interstitial space between the atomic layers of the anode and during discharge the lithium is extracted from the anode and inserted into the cathode.2 The lithium ions are transported between the electrodes in an electrolyte comprised of a lithium salt dissolved in an aprotic organic solvent. A typical electrolyte, widely used in the DOE programs, consists of LiPF6 (450227) dissolved in a mixture of ethylene carbonate (676802) and ethyl methyl carbonate (EMC). A separator layer, usually a microporous polyolefin film, such as Celgard® 2500, a 25 μm polypropylene membrane, is placed between the electrodes to prevent electrical shorts while allowing flow of ionic current. 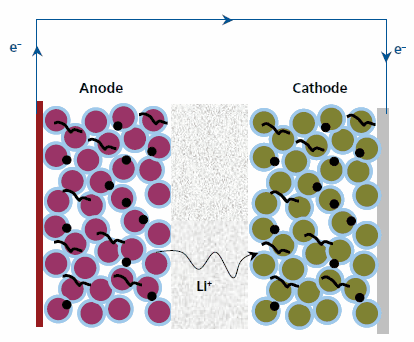 The most popular material used as a host for lithium in the anode is graphitic carbon, usually supported on a copper substrate current collector. Other carbons, including both soft and hard carbons, have been used but graphitic carbons offer the best balance of reversible capacity and cycle life. When fully charged, all carbon materials approach to within 50 mV of the reversible lithium potential.

As an alternative to graphite, the DOE is investigating lithium alloys, including Li-Si, Li-Sn, and Li-Sb systems, and intermetallic electrodes, such as CuSn, Cu6Sn6, and CoCu5Sn5. These materials can provide an electrochemical potential only a few hundred mV above that of metallic lithium and a capacity of at least 400 mAh/g (>1500 mAh/ml).3 Alloys of lithium with metals and/or intermetallic compounds, however, experience severe volume expansion/contraction during the charging (alloying), and discharging (de-alloying processes). When used in electrodes in Li-ion cells, these large volume changes lead to mechanical pulverization, loss of electronic contact between particles, and poor cycling. Approaches to alleviating this problem include using nanosized particles and/or including the alloying metal particles in a matrix phase to buffer the volume changes. These approaches are showing some improvements in experimental cells.

Metal oxides, such as lithium titanate (400939), that were previously investigated as positive electrode materials, have recently attracted attention as negative electrodes. The DOE program has studied the electrochemical and thermal properties of the Li4Ti5O12 spinel4 and is now focused on LiTiO2. These materials generally have high reversible capacity (up to 600 mAh/g) and high lithium diffusion rates, though their potential against lithium is in the order of 1.0-1.5V. This results in a reduction of cell voltage and energy compared to cells using a carbonaceous anode with the same cathode and electrolyte. Moreover, these materials are extremely stable and can lead to battery systems that are inherently reliable and safe compared to other Li-Ion battery technologies. A new stable, nano-phase form of lithium titanate was developed that can provide an increase in the energy density of the cell and allow for easier industrial processing.

The majority of Li-ion batteries on the market today utilize lithium cobalt oxide (LiCoO2,  442704) as the positive electrode material. LiCoO2 offers good electrical performance, is easily prepared, and is relatively insensitive to process variations and moisture. It may not, however, have the balance of properties needed to meet the stringent life, abuse tolerance, and cost targets of vehicle applications. As a consequence, DOE is evaluating several candidate lithiated metal oxide cathode materials that offer improvements over LiCoO2.

Manganese oxides are inexpensive, environmentally benign, have excellent safety characteristics, and inherently high rate capability making them ideal candidates for advanced cathodes. Work is underway to improve the performance of Mn-based electrodes by developing a firm scientific understanding of the factors that control or influence electrochemical performance and utilize this to design and develop improved compositions. One approach being taken is cationic and anionic substitutions, e.g., substituting Li, Ni and/or Co for Mn and F for O. For example, a substituted spinel, LiMn1.8Li0.1Ni0.1O3.8F0.2, exhibited improved electrochemical performance compared to a conventional LiMn2O4 cathode (482277). Another approach is the development of high-voltage, high-capacity electrodes with two-component integrated structures, e.g., ‘layered-layered’ xLi2M’O3•(1-x)LiMO2 and ‘layered-spinel’ xLi2M’O3•(1-x)LiM2O4 electrodes in which M’ is predominantly Mn and M is selected mainly from Mn, Ni and Co. In these composite structures, one layer is electrochemically active while the other is an electrochemically inactive, stabilizing component.

DOE is also investigating ways to improve the performance of LiFePO4 cathodes. This effort is focused on developing composite cathodes with electrochemically-active polymers. The purpose is to replace electrochemically inactive cathode components, such as binders and conductive carbons, with electroactive materials that will contribute to the cell’s energy storage capacity. The investigations include fabricating and evaluating carbon-coated LiFePO4/polymer composite cathodes with polypyrrole (PPy, polymerized from a pyrrole monomer with sodium p-toluenesulfonate dopant and (NH4)2S2O8  as oxidizer in deionized water), polyaniline (PAn, synthesized from aniline with (NH4)2S2O8 as oxidizer in water), and polytriphenylamine (PTPA, obtained by polymerization of triphenylamine monomer with FeCl3  as oxidizer in CHCl3 solution). Different methods are being used to make these composite cathodes, including direct mixing of LiFePO4 with the polymer and simultaneous chemical polymerization of PPy or PAn with LiFePO4 in the precursor solution.

Most practical electrolyte solvents are not thermodynamically stable at the low voltage of the negative electrode and a layer of decomposition products form spontaneously on the carbonaceous anode electrode surface during the first charge. This solid electrolyte interphase (SEI) layer protects the electrolyte from further decomposition while being ionically conductive and allowing passage of Li+ ions and is the key to stable battery performance. The dominant species in the SEI layer have been identified as lithium alkyl carbonates (ROCO2Li) and lithium alkoxides (ROLi), and include Li oxalate, Li ethylene carbonate, and Li ethylene dicarbonate. Additional studies into the characteristics of the SEI layer and how they are impacted by cell fabrication and formation conditions are underway.

Research is also underway to understand the fundamental characteristics of Li+ transport to enable higher rate, more stable electrodes and electrolytes to be developed. First principles quantum chemistry calculations are being used to develop atomic force fields, which are then used in molecular dynamics simulations to investigate charge transport, bulk, and interfacial resistance. Among other findings, it has been discovered that the predicted charge transfer resistance increased over one order of magnitude when the temperature was decreased from room temperature to below 0 °C, as observed experimentally, and that the main contribution to this increased resistance is the mean free energy associated with Li+ desolvation.

Research is also continuing to find an electrolyte that will permit the use of lithium metal as an anode since it offers the highest theoretical energy density of any known form of lithium. One approach being investigated is the development of a composite polymer electrolyte (with a hard non-conducting part that inhibits dendrites and second highly conducting portion) that mitigates the threat of dendritic growths that can short the cell. This concept (Figure 3) holds the promise of enabling lithium rechargeable cells with two to three times the energy density of current lithium ion cells. The materials research and development activities described above are part of a comprehensive DOE effort to develop the advanced batteries needed to commercialize plug-in hybrid electric vehicles. The objective of this research is to give battery developers a range of materials for anodes, cathodes, and electrolytes that they might choose to incorporate in the cells and batteries that they are developing. The current battery development efforts, sponsored by DOE in partnership with the USABC, consist of four contracts to address critical issues of PHEV battery cost and life and incorporate many of the materials and technologies described above. This wide range of technologies is being explored in order to reduce the uncertainty of whether cost-competitive batteries with adequate performance and life can be commercialized by 2016.