In recent years, the biological processes involved in the pathogenesis of Alzheimer’s disease (AD) have become increasingly better understood. It is now recognized that a key role is played by BACE1 proteases that cleave amyloid precursor protein (APP) to produce the amyloid β42 peptide fragment, ultimately resulting in the formation of amyloid plaques. Development of specific inhibitors of BACE1 proteases is thus one of the most active areas in the development of drugs for AD. This article describes a FRET-based screening system for the identification and assay of such inhibitors.

Due to the aging population in many countries, the prevalence of neurodegenerative diseases has increased, and finding a treatment or cure has become a focus of many researchers worldwide. AD is the most common cause of dementia, with age contributing to its onset. United Nations (UN) population projections estimate that the number of people older than 80 years will approach 370 million by the year 2050. Currently, it is estimated that 50% of people over age 85 are afflicted with AD, and that greater than 100 million people worldwide will suffer from dementia in 50 years. The vast number of people requiring constant care and related services will severely strain medical, monetary and human resources.

The onset of AD is gradual, with the appearance of clinical symptoms occurring between 60-70 years of age, and is characterized by the progressive loss of cognitive function. One of the primary causes for the progression of AD is believed to be the accumulation of amyloid beta peptide (Aβ) in the brain. Aβ is formed by the sequential cleaving of the amyloid precursor protein by the proteases BACE1 (β-secretase or beta-site APP-cleaving enzyme) and γ-secretase (Figure 1). The Aβ is secreted into the extracellular spaces and accumulates to form aggregates, fibrils and eventually amyloid deposits called senile plaques. The two types of Aβ formed from secretase cleavage are Aβ40 and Aβ42, with the latter being the prevalent form found in the senile plaques. Blocking the activity of BACE1 or γ-secretase can inhibit the production of Aβ peptides. Therefore, the identification of proteins or compounds that block secretase activity has been and remains a major goal of AD research.

This intense interest in studying the inhibition of γ- and β-secretases for therapeutic intervention in AD patients is heightened by the fact that there is no effective drug for the treatment of the disease.1-3 Knockout studies show that BACE1 is critical for Aβ generation. Transgenic mice lacking BACE1 do not produce Aβ, but show an otherwise normal phenotype with no detrimental effects on viability or morphology.4 This fact raises the possibility that BACE1 inhibition could be achieved without developing toxic side effects. Consequently, BACE1 has become a target for drug discovery research. 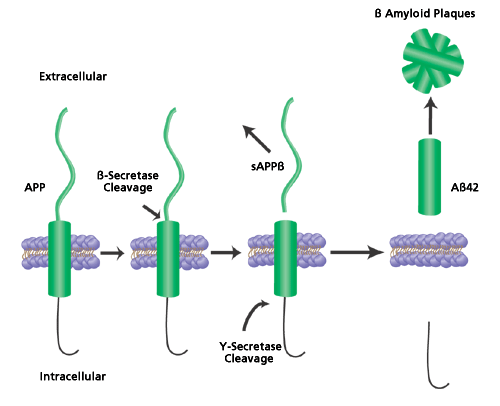 The BACE1 Activity Assay Kit (Product No. CS0010) is designed for BACE1 inhibitor screening and is based on a convenient method of fluorescence resonance energy transfer (FRET) in which the fluorescence signal is observed after the substrate is cleaved by BACE1 (Figure 2). Results are obtained in 2 hours, but data can be collected up to 24 hours after the addition of stop solution.

The kit provides all the reagents required for the detection of BACE1 activity in a quantity sufficient for 250 inhibition reactions of 100 µL in 96 well plates. The reagents include fluorescence assay buffer, stop solution, substrate, standard and BACE1 enzyme (β-secretase).

BACE1 enzyme, substrate, standard, test samples and buffer are then added to the wells for a total volume of 100 µL, with the BACE1 enzyme being added last, just prior to reading (Table 1).

The BACE1 enzyme converts 5-20% of the substrate to a fluorescent product during 1-2 hours at 37 °C. The standard curve is prepared by subtracting the fluorescence units (FU) of the negative control from all signal readings and plotting the FU against the concentrations of the standards (Figure 3). The FU of the test samples are extrapolated from the curve to give a pmol value, which is then used in the following equation to calculate the percent BACE1 cleaved by the sample:

Where S is the sample value in pmol and 500 is the value of the highest standard in pmol, which is calibrated to represent 50% BACE1 cleavage. 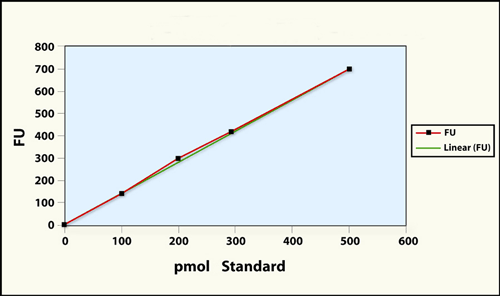 An inhibition curve can then be created by plotting the percent cleavage of each test sample dilution against the initial concentration on a logarithmic scale. An example curve is given in Figure 4. The curve was created using serial dilutions of the known statine-derived BACE1 inhibitor, [Asn670, Sta671, Val672]-Amyloid β/A4 Precursor Protein 770 Fragment [662-675], ammonium salt (Product No. A1847) in the standard kit assay protocol. 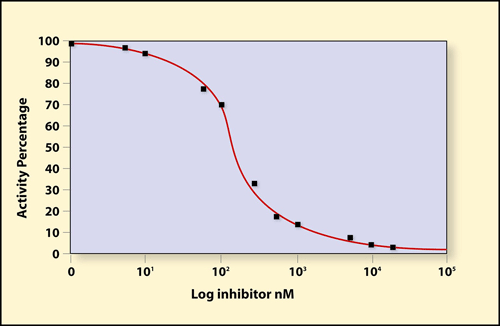 Figure 4.Inhibition of BACE activity by a statine-derived inhibitor (Product No. A1847). BACE1 was incubated with various concentrations of the inhibitor for 2 hours at 37 °C. BACE1 activity was determined using the BACE1 Activity Assay Kit (Product No. CS0010).

The BACE1 Activity Assay Kit can also be used to measure BACE1 activity in tissue homogenates. Figure 5 illustrates the measurement of BACE1 activity in rat brain and liver tissues using 10 µg of tissue homogenate per reaction. The activity was measured in the presence or absence of the inhibitor ([Asn670,Sta671,Val672]-Amyloid β/A4 Precursor Protein 770 Fragment [662-675] ammonium salt) at a concentration of 10 µM. The difference between the fluorescence obtained by the samples with and without the inhibitor (ΔFU) represents the actual BACE1 activity. As shown in Figure 5, BACE1 activity was detected in rat brain while there was no significant activity in rat liver. 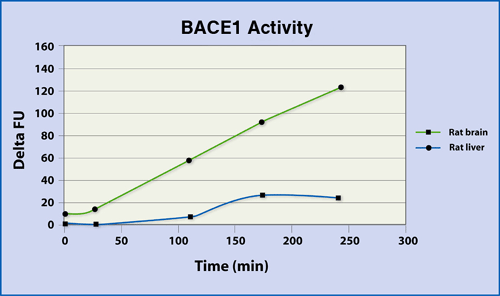 In summary, the BACE1 Activity Assay Kit should serve as a useful tool to assay BACE1 enzyme activity. More importantly, the kit should assist researchers in identifying inhibitors of BACE1 proteases, a key player in the pathogenesis of AD.