Intact bacterial lipopolysaccharides are macromolecules of molecular mass 10‑20 kDa made up of three structural components
(Figure 1): 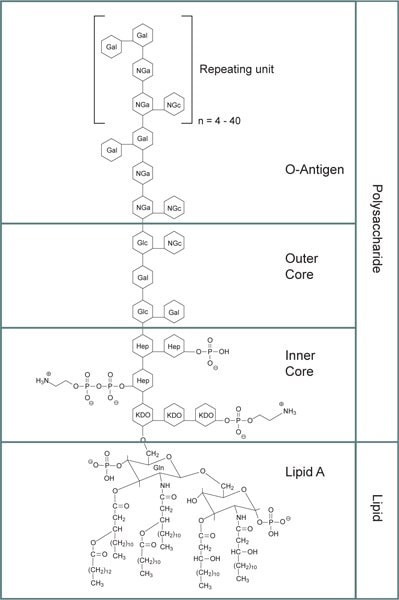 The lipid A core is made up of a β-glucosamine-(1→6)-glucosamine-1-phosphate base with fatty acid esters attached to both carbohydrates. The acyl chain length and number of acyl groups may vary between bacterial species but are relatively conserved within a species. The inner polysaccharide core typically contains between 1 and 4 molecules of the KDO (3‑deoxy-α-D-manno-octulosonic acid) attached to the disaccharide core. KDO is specifically associated with lipopolysaccharide, and biologically active lipid A was thought to require at least one KDO residue for bacterial survival.2 However, an Escherichia coli K-12 suppressor strain that is KDO deficient demonstrates that the KDO requirement is not absolute for viability.3

The KDO-containing inner core also is modified with heptulose (ketoheptose) monosaccharides, the most common of which is L-glycero-α-D-manno-heptopyranose. The inner core glycan residues are typically phosphorylated or modified with phosphate-containing groups, e.g., pyrophosphate or 2‑aminoethylphosphate. The phosphate groups of lipopolysaccharides increase the overall negative charge of the cell membrane and help to stabilize the structure.

The outer core of the lipopolysaccharide contains more common hexoses, including glucose, galactose, and N-acetylglucosamine and is structurally more diverse than the inner core.

The core section and the lipid A section of a lipopolysaccharide may have some variability in structure, while the O-antigen has a high degree of structural variability as well as variability in the number of repeating units. These differences result in a significant amount of heterogeneity in LPS preparations. Since LPS is heterogeneous and tends to form aggregates of varying sizes, there is a reported "molecular mass" range for these aggregates of 1‑4 million Dalton or greater. When the LPS is treated with sodium dodecyl sulfate (SDS) and heat, the molecular mass is ~50‑100 kDa.5

Within Gram-negative bacteria, the membrane lipopolysaccharides protect the bacterium against the action of bile salts and lipophilic antibiotics.6

Lipopolysaccharides are heat-stable endotoxins and have long been recognized as a key factor in septic shock (septicemia) in humans1,7 and, more generally, in inducing a strong immune response in normal mammalian cells. The lipid A moiety has been identified as critical to the endotoxin activity of lipopolysaccharide. This was demonstrated, Galanos, et al., by finding identical bioactive results, including endotoxic activity, between synthetic and natural-sourced E. coli lipid A preparations.8 The active receptor for lipopolysaccharide has been identified as the CD14/TLR4/MD2 receptor complex, which promotes the secretion of proinflammatory cytokines including tumor necrosis factor-α and interleukin-1.9 While the lipid A component is primarily responsible for immune response activation, the polysaccharide component of Salmonella enterica LPS is also necessary for NF-κB activation.10

Lipopolysaccharide preparations have been used in research for the elucidation of LPS structure,11 metabolism,12 immunology,13 physiology,14 toxicity,15 and biosynthesis.16 They have also been used to induce synthesis and secretion of growth-promoting factors such as interleukins.17,18 Because of its connection to septicemia, lipopolysaccharide has been studied to identify possible targets for antibodies and inhibitors to LPS biosynthesis.19,20

Lipopolysaccharides can be prepared by extraction from TCA,21 phenol,22,23 or phenol-chloroform-petroleum ether (for rough strains).24 TCA extracted lipopolysaccharides are structurally similar to the phenol extracted ones, with similar electrophoretic patterns and endotoxicity. The primary differences are in the amounts of nucleic acid and protein contaminants remaining after extraction. The TCA extracts contain ~2% RNA and ~10% denatured proteins, while phenol extracts contain up to 60% RNA and <1% protein. Subsequent purification by gel filtration chromatography removes much of the protein present in the phenolextracted LPS but results in a preparation that contains 10‑20% nucleic acids. Further purification using ion exchange chromatography yields a lipopolysaccharide product that contains <1% protein and <1% RNA.