In this article, we present our state-of-the-art self-assembly method for fabricating highly organized and controlled micro- and nanoscale SWCNT networks on various substrates.12–14 Second, we demonstrate integration of these organized architectures for application in an optoelectronic device by creating highly controlled heterojunctions of SWCNTs and silicon. This represents a new kind of photodiode-based logic device that can be controlled by both optical and electrical input with high voltage-switchable photocurrent responsivity (>1 A/W), photovoltage responsivity (>105 V/W), and good electrical and optical on/off ratio (electrical: >105 and optical: >104).15 Third, we demonstrate the use of these SWCNT networks for high performance hydrogen sulfide (H2S) detection by functionalizing with 2,2,6,6-tetramethylpiperidine-1-oxyl (TEMPO).16 Finally, we introduce the structural transformation of SWCNT networks to continuous multiwalled carbon nanotubes and then onto the graphite/multilayered graphene nanoribbon structures by using a newly developed voltage-controlled electrical treatment method called, “nanotube fusion,” which not only demonstrates the new method to engineer the sp2 structures of carbon nanotubes, but also greatly improves their electrical and thermal transport properties.17

The method we used to fabricate highly organized and aligned SWCNT thin films is a template-guided fluidic assembly, which employs a lithographically patterned template-assisted dip coating.12–14,18 SWCNTs were directly assembled on a hydrophilic surface, between predesigned photoresist channels, forming highly originated SWCNT lateral networks in micro- and nanoscale. The quality of fluidic assembly can be improved when the substrates are treated with plasmas, which increases the number of dangling bonds and hydrophilic hydroxide functional groups on the surface. Figure 1 shows the detailed procedures of the template-guided fluidic assembly method. Figures 1A–C show the SiO2 substrate was treated by plasmas, then spincoated by photoresist, and patterned by lithography techniques (photo- and e-beam lithography for micro- and nanoscale patterns, respectively). Figure 1D demonstrates that the prepatterned substrate was first vertically submerged into the SWCNT-deionized (DI) water solution using a dip coater and then gradually lifted from the solution with a constant pulling speed. Figures 1E and 1C show the SWCNT network’s patterns formed between the micro/nanoscale trenches and the SWCNT networks on the SiO2 substrate after removing the photoresist. Figures 1G–J show the centimeter-scale, millimeter-scale, microscale, and nanoscale assembled SWCNT networks on the SiO2/Si substrate. 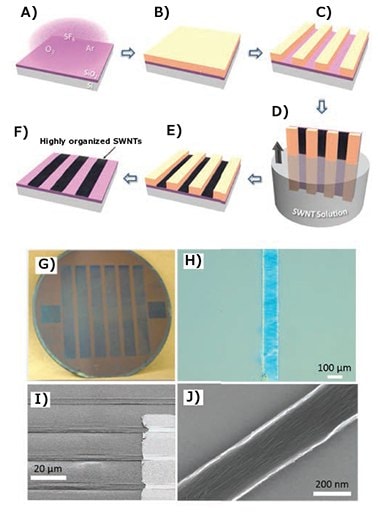 The development of silicon-based photonic circuit components, such as on-chip sources, modulators, storages, etc., are a promising way to solve the bottleneck of transportation speed and integration of conventional silicon circuits.19,20 Here we show that the highly integrated and controlled heterojunction of SWCNT and silicon can demonstrate a radically unconventional, sharply nonlinear, reverse-bias-dependent photocurrent. This novel phenomenon provides a new way in which to obtain multifunction analog and mixed digital optoelectronic operations with high switching ratios. Large switching of photocurrent can be obtained with small changes in voltage, enabling optoelectronic gate/devices with logic outputs depending on the logic state of both optical and electronic inputs. We demonstrate a number of novel optoelectronic switches/devices and lithographic assembly of a large array of SWCNT architecture devices over a centimeter-scale wafer. Figures 2A and 2E show the schematic and digital photograph of high-density SWCNTSi heterojunction patterns. The SWCNTs were assembled as micro/nanoscale device architectures on the lightly p-doped silicon surface using the template fluidic method followed by the conventional photolithography, which is shown in Figure 2F. Figure 2B presents the dark and illuminated I–V curves of SWCNT-Si junctions, and the photocurrent response in a metalsilicon junction with similar dimensions. Though the dark I–V in the SWCNT-Si junctions follows conventional diode rectification behavior, the current clearly deviates from the conventional behavior that sharply rises by several orders of magnitude within a few volts of reverse bias Vr, which is different from the illuminated I–V of a conventional metal-Si Schottky junction with comparable dimension under the same light source. A proposed semi-quantitative model of the band structure of these heterojunctions reveals that the sharply nonlinear photocurrent behavior is possibly related to the reverse-bias-tunable total number of available states in the SWCNT belts, n(ε=eVr). Figure 2C presents photographs of an array of SWCNT assembly Si sensors. Figure 2G shows interdigitated SWCNT networks connected to source and drain electrodes, which is equivalent to two back-to-back photodiodes forming a bidirectional phototransistor. Figure 2H shows a mixed-input optoelectronic and gate, the light and the applied voltage are the inputs and the measured current is the output. In addition, Figures 2I–J show the 2-bit and 4-bit digital optical input, voltage-switchable analog output ADDER circuit separately; when the reversed voltage is applied, the output shows an analog equivalent of digital sum. Hence, SWCNT-Si junctions are a versatile platform for optoelectronic applications ranging from photosensor, photoconvertor, photometry, and imaging.

Figure 2. Schematics of novel optoelectronic devices and image of array of SWCNT-Si sensor. A) SWCNT-Si heterojunction test structure (2 cm × 2 cm) with electrodes. B) Dark and illuminated I–V curves of a typical SWCNT-Si heterojunction C) SWCNT-Si sensor: Digital photograph of a 0.25 megapixel array of SWCNT-Si sensors (array area, 12 mm × 12 mm), and D) SEM image of the ‘core’ of the sensor. E) Digital photograph of SWCNT-Si heterojunction structure. F) SEM image of assembled SWCNT belt. G) A bidirectional phototransistor using interdigitated SWCNT fingers attached to source-drain leads. The active region of this device has an area of 3 mm × 200 mm. H) An AND gate with optical and electrical inputs and an electrical output. The active region of the junction has an area of 3 mm × 100 mm. Inset table: a typical set of operating conditions determining the ‘low’ and ‘high’ logic states for both input and output conditions. I) 2-bit ADDER/OR gate with 2 optical inputs and an electrical input and output. J) 4-bit digital to analog converter. From Reference 15 with permission from the Nature Publishing Group.

SWCNT is the subject of active research for various chemical sensors due to its many advantages, such as unique nanostructure, high mobility, high current density, highly effective electrochemical surface area, etc.8 Since the pristine CNT-based chemical sensors only utilize their intrinsic electrochemical properties to overcome their limitations in selectivity and sensitivity, functionalizing SWCNTs with covalent or non-covalent materials has been used to further improve the sensitivity of SWCNT-based chemical sensors. Due to its one-dimensional nanostructure, SWCNT is very sensitive to environmental changes such as humidity and surrounding temperature.

In developing a H2S gas sensor, we used molecular doping of TEMPO as a catalyst on the surface of SWCNTs to improve the sensitivity of H2S detection by a redox reaction at room temperature. Figures 3A–D show the SEM images of highly organized micro-sensor devices from which large scale SWCNT network patterns were fabricated by the template-guided fluidic assembly method, followed by TEMPO coating. Figure 3E shows the chemical structure of TEMPO used to functionalize SWCNTs. This compound is capable of oxidizing the gaseous H2S and can be utilized as a sensory molecule for a H2S sensor. Figure 3F shows the real-time current change of functionalized SWCNT sensor with various concentrations of H2S gas. Figure 3G shows the intrinsic sensitivity of the device and benefits after TEMPO functionalization. Based on our results, TEMPO can be oxidized to TEMPO+, which is a very important product for H2S dissociation. The reduction reaction of TEMPO+ to TEMPO-H is coupled to the dissociation process of H2S to S+2H++2e-, since in the air, the SWCNT device shows the P-type properties due to oxygen ions (O2). Newly generated electrons are donated to SWCNTs to make it less a P-type property, which makes the functionalized SWCNTs more sensitive than the bare SWCNTs. In addition, we find that humidity enhances the sensitivity of H2S by improving the transfer from TEMPO to TEMPO+. Finally, we demonstrate that a SWCNT device functionalized with TEMPO is highly responsive to the H2S gas with increasing humidity. This is especially true of semi-SWCNTs, which show a very high sensitivity up to 420% at 60% humidity. Figure 3. High-performance H2S detector based on SWCNT networks. A–D) SEM image of an array of assembled SWCNT devices. E) Chemical structure of TEMPO molecules. F) Real-time current changes as a function of concentration of H2S gas for the functionalized SWCNT sensor. G) Sensitivity of bare semi-SWCNT device and TEMPO-functionalized SWCNT device as a function of humidity. From Reference 16 with permission from The Royal Society of Chemistry.

Through controlling the magnitude of the voltage pulse, sourceon- time, and the number of switching cycles applied to the SWCNT networks, the targeted transformed nanostructures (MWCNTs or GNRs) can be obtained without the generation of any structural defects. We also find that, after the structure transformation, both electrical conductivity (up to 35% resistance drop) and thermal conductivity (up to 6–7 times higher thermal conductivity, 300 W/mK) of SWCNT networks are greatly improved. Figure 4A shows the assembled SWCNT network structure on the TEM grid with metal electrodes. Figure 4B shows the I–V curve of SWCNT networks, the maximum current density, and breakdown voltage (Vb). Figure 4C shows the time-dependent alternating voltage pulse applied on the SWCNT device. Figures 4D–F show the TEM images of pristine SWCNTs, MWNTs (0.6Vb, 3,000 cycles), and GNRs (0.8Vb, 3,000 cycles) after the electrical fusion process. Figures 4G–H show the resistance change and thermal conductivity of SWCNT devices at various applied voltages at the same 3,000 cycles. 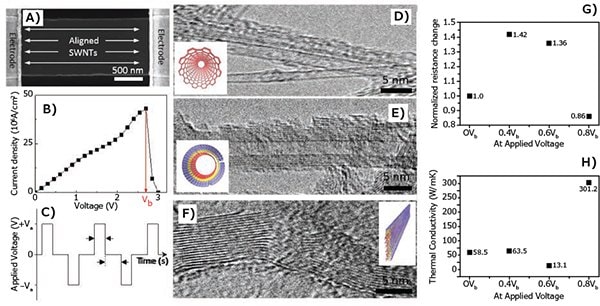 We presented, in this article, the template-guided fluidic assembly of highly organized SWCNT networks. Using lithographically patterned template-assisted dip-coating methods, SWCNTs are directly assembled between pre-designed micro- and nanoscale photoresist channels forming densely packed organized SWCNT lateral networks in diverse geometries with feature sizes ranging from 150 nm to several hundred microscales. These highly organized micro- and nanoscale SWCNT network structures can be integrated into a variety of sensing device architectures. The room temperature and wafer-level scaling compatibility of the template-guided fluidic assembly technique provide robust and reproducible device results over large areas. In this regard, we demonstrated a high-performance photodetector and a new kind of logic device using scalable heterojunctions of SWCNTs and silicon, whose output currents can be manipulated completely by both optical and electrical inputs. We also introduced a SWCNT-based chemical sensor which can detect H2S gas effectively by the redox reactions occurring on SWCNT networks functionalized with TEMPO as a catalyst.