Departments of Chemistry and Physics, The Pennsylvania State University

Self-assembly techniques at the supramolecular 1–100 nm scale have been extensively studied for applications ranging from biocompatible systems to microelectronics.1, 2 As the dimensions of patterned surface structures decrease, the difficulty and intricacy of fabricating and measuring these structures increases.3, 4 Employing a library of molecules with a range of distinctive chemical and physical properties allows the design and the fabrication of thin films for specific applications. 1-Adamantanethiol (1-AD), an example in this spectrum of molecules with distinct chemical and physical properties, forms self-assembled monolayers (SAMs) on Au{111} that are displaceable when exposed to other thiolated molecules from solution, vapor, or contact5, 6 due to weak intermolecular interactions in 1-AD SAMs. This process is called microdisplacement. The process can be applied to intelligent self- and directed- assembly7, 8 to fabricate nanoscaleseparated SAMs and improve chemical patterning techniques.

All SAMs were fabricated using 1-adamantanethiol (Prod. No. 659452), 1-dodecanethiol (Prod. No. 471364), and 1-octanethiol ( Prod. No. 471836) on commercially available Au{111} that was evaporated onto freshly cleaved mica substrates and annealed using a hydrogen flame just prior to deposition. A single component 1-AD SAM was created by immersing a gold substrate into a 10 mM ethanolic 1-AD solution for 24 h. Subsequently, the gold substrate with the single-component 1-AD SAM was rinsed in neat ethanol and blown dry with nitrogen twice.

To fabricate separated C12 and 1-AD SAMs, a singlecomponent 1-AD SAM was immersed in a 1 mM ethanolic C12 solution for a displacement time of 20 min and then rinsed in neat ethanol and blown dry with nitrogen twice. Representative scanning tunneling microscopy (STM) images were acquired for both the single-component 1-AD SAMs and the separated C12 and 1-AD SAMs within 24 h of SAM fabrication. From the STM images, the lattice structure, the domain boundaries, and the molecular order of the SAMs were investigated. All STM measurements were performed under ambient conditions using a custom beetle-style STM.9 Images were recorded in constant-current mode and at high tunneling gap impedances (~1012 GΩ) to ensure large tipsample separation for minimal contact between the probe tip and the monolayer.

Microdisplacement-printed SAMs were fabricated by contact of a C8 coated patterned elastomeric stamp with a preformed single-component 1-AD SAM.7, 8 An elastomeric polydimethylsiloxane (PDMS) stamp was fabricated, cleaned, and exposed to a 10 mM ethanolic solution of C8 for 10 s and blown dry with nitrogen using a modified method described by Graham et al.10 The stamp with C8 ink was contacted to the single-component 1-AD SAM for 5 min, and then the sample was rinsed in neat ethanol and blown dry with nitrogen twice. Lateral force microscopy (LFM) images were acquired within 1 h of pattern fabrication using a Thermo Microscopes Autoprobe CP Research Atomic Force Microscope (Veeco, Santa Barbara, CA). Silicon nitride tips with a spring constant of 0.05 nN/m were used as received from Mikromasch (Portland, OR).

Both of these features are commonly observed in thiol SAMs. Additionally, 1-AD SAMs show depressed domain boundaries resulting from rotational domains of the 1-AD molecules. This is in contrast to alkanethiolate SAM systems, which exhibit protruding domain boundaries associated with regions of molecules with differing tilts, rotational and translational boundaries, and stacking faults.11-13 Figure 1 (B) shows a representative STM image with molecular resolution of a single-component 1-AD SAM, showing individual molecules arranged in a hexagonally closed-packed structure with nearest-neighbor spacing of 6.9 ± 0.4 Å. This lattice spacing is considerably larger than the nearest-neighbor spacing for alkanethiolate SAMs and can be attributed to the bulky carbon cage of 1-AD molecules compared to the relatively compact (predominantly all-trans) alkyl chains of alkanethiolates. A (7×7) unit cell can be assigned to the 1-AD SAM with respect to the Au{111} substrate.5 Typical alkanethiol SAMs exhibit a (√3×√3)R30° unit cell. This implies that there are 1.8 times more molecules in an alkanethiol SAM than in a 1-AD SAM in the same area of Au{111}. For example, in a (7√3×7√3)R30° unit area of Au{111}, which is the unit area where the 1-AD and alkanethiolate unit cells overlap, there are 49 alkanethiolate molecules (21.4 Å2/molecule) and 27 1-AD molecules (38.9 Å2/molecule).

Nanoscale-separated SAMs offer excellent opportunities to investigate the influence of intermolecular interactions on the assembly of thin films, which is essential for the further development of chemical patterning techniques.14, 15 Figure 2 (A and B) show representative STM images of separated C12 and 1-AD SAMs formed via C12 solution displacement of preformed 1-AD SAMs.

The apparent heights and the differences in lattice spacing were employed to differentiate between the C12 and 1-AD lattice types. The most protruding lattice with smaller molecular spacing that originates at the substrate defects was attributed to C12, while the less protruding lattice with larger molecular spacing was attributed to 1-AD. Substrate step edges and substrate vacancy islands (the most depressed regions) were observed throughout the separated SAM. The fractional C12 coverage of the separated C12 and 1-AD SAM was controlled by the C12 displacement time (i.e. longer C12 displacement times result in larger C12 domains). At long C12 displacement times, the resulting SAM was completely composed of C12 molecules, although the C12 domains were significantly smaller when compared to a single-component C12 SAM.

Microcontact printing (μCp) is a technique for chemically patterning a substrate by contact with an elastomeric stamp that is inked with the molecules to be patterned.16 Molecules on the stamp are transferred from the stamp to the substrate only in places where the stamp and substrate are in contact. However, this process is limited to molecules that are not susceptible to lateral diffusion across the surface. Microdisplacement printing (μDp), is an alternative patterning technique not limited by lateral diffusion. In μDp, a preformed 1-AD monolayer is used that is sufficiently labile to be displaced by patterned molecules through competitive adsorption while preventing lateral diffusion of the patterned molecules.7,8 Figure 3 displays a LFM image of a patterned Au{111} substrate fabricated by μDp. 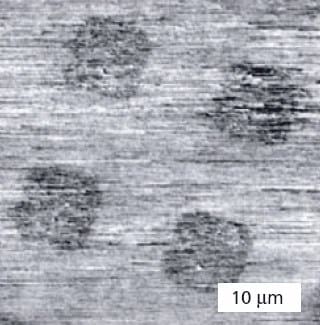 The low-friction (shown as dark) squares are stamped C8 molecules, and the high-friction (shown as light) background is the preformed 1-AD SAM. This pattern could not be formed using traditional μCp printing. μDp also eliminates the need for solvent exposure after stamping. Solvent exposure is often required in μCp to prevent degradation of the pattern over time, but the precision of the pattern is reduced due to molecular exchange. With microdisplacement printing, the 1-AD SAM is still present in places where the elastomeric stamp did not contact the surface; thus, a solvent exposure step is not necessarily required. Multiple stamping steps can also be used to create proximate structures, circumventing the difficulty in the precise registration of neighboring patterns in conventional printing.8

Highly ordered, one-molecule-thick films of 1-adamantanethiol (1-AD) can be fabricated on Au{111} substrates. Exploiting the labile nature of 1-AD SAMs, precise nanoscale-separated SAMs can be fabricated and can enhance common chemical patterning techniques by hindering the lateral movement of molecules across a patterned surface.