Combining Permeability and Solubility Analyses in a Single Workflow

The Applications Note details the benefits of combining solubility and a non-cell based permeability assay (Parallel Artificial Membrane Permeation Assay; PAMPA) into a single workflow in which a portion of the filtrate from the MultiScreen® Solubility filter plate is added to the donor compartment of the MultiScreen filter plate for the PAMPA analysis. Benefits include sample conservation, increased efficiency, decreased interference from membrane retention, improved reliability, reproducibility, and data quality.

With the high demand for the pharmaceutical industry to introduce new drugs to market quickly and in a cost-effective manner, it has become increasingly important to determine compound absorption, distribution, metabolism, and excretion (ADME) properties earlier in the drug discovery process. Perhaps the most critical and important first characteristics to measure include compound solubility and permeability.

Determining aqueous compound solubility has become an essential early measurement in the drug discovery process. Poor water solubility can cause problems in many different in vitrotesting analyses, leading to unreliable results and/or reproducibility problems. Consequently, candidate compounds can fail during drug development due to unfavorable physicochemical profiles. An even larger problem may result if insoluble precipitates cause false positives in bioassays, potentially wasting valuable resources. Such issues can add significant cost and time to drug development activities. Furthermore, knowledge of compound solubility can allow for more efficient compound analyses in other in vitro or in vivo assays.

Parallel Artificial Membrane Permeation Assays (PAMPA) that predict passive absorption of orally administered drugs have also become increasingly important in the drug discovery process. The ability and speed with which a molecule permeates the intestinal epithelium can be an important determinant of whether a compound becomes a potential lead candidate. Faller1 and Kansy2 have both described rapid, low cost, and automation-friendly methods to measure passive permeability. Each is based on the use of an artificial lipid membrane – hexadecane in the assay developed by Faller and lecithin dissolved in dodecane in the method developed by Kansy. These artificial membranes model the passive transport properties of the cell membrane. The benefits of such assays include compatibility with pH profiling, increased speed due to shorter incubation times, improved data reproducibility, and correlation with human absorption data.

This Application Note details the benefits of combining both the Solubility and PAMPA (such as Phospholipid PAMPA or hexadecane PAMPA) into a single workflow by using the filtrate from the solubility assay as the solution added to the donor compartment for PAMPA.

The MultiScreen Solubility filter plate has been designed and optimized for the determination of aqueous solubility in a high-throughput and automation-compatible workflow.3, 4 The filtrate obtained from the solubility assay contains the compound of interest at its limit of aqueous solubility. The solubility analysis requires only a portion (60 to 75 µL from a total volume of 300 µL) of the filtrate sample meaning that there is sufficient remaining volume to serve as the PAMPA donor solution. Lipid PAMPA and Hexadecane PAMPA are also carried out in a 96-well format and measure the rate at which compounds diffuse from a Donor to an Acceptor compartment separated by a lipid layer contained within the membrane.

The general procedure for determining passive permeability1,2,5 (Pe, Figure 1) does not require a specific concentration of compounds to be added to the donor compartment. Rather, a single concentration (e.g., 100 µM or 500 µM, etc.) is typically employed for all compounds. Such practice simplifies the assay, allows for efficient workflow, ease of automation, and sample handling. Provided there are no analytical or solubility problems, Pe(or log Pe) should be independent of (initial) donor compound concentration because the donor concentration is not a factor in the equation.

Protocols, reagents, equipment, and materials were used as described in the Protocol Note entitled, “Determination of aqueous compound solubility using a 96-well filter plate to remove precipitated solids prior to UV/Vis spectroscopic analysis” and Millipore Application Note entitled, “The evaluation of the reproducibility of passive, transcellular drug permeability assays” with the following modifications:

While such characteristics may be present in a large number of compounds, those molecules that do not possess all of these attributes may produce spurious and unreliable results. This application note details the issues associated with determining Pe well below or above the limit of compound solubility and the benefits of determining compound solubility and Pe in a single workflow. Figure 2. The Effect of Donor Concentration on Pe: Permeability rates for thioridazine and diclofenac over a concentration range of 50 to 500 µM

Figure 3. Schematic of a Combined Solubility and PAMPA

Measuring drug permeability below the solubility limit can lead to detection problems such as increased data scatter and poor reproducibility. The benefits of working at the solubility limit as compared to a concentration significantly below the solubility limit are illustrated in Figure 4. The Pe values determined from a donor concentration below the solubility limit (100 µM) have a significant amount of data scatter as indicated by the elevated %CVs (error bars). This can be attributed to compound characteristics such as low Pe, a poor UV/Vis extinction coefficient, and/or high membrane retention (LogP6). Furthermore, due to the low sample concentrations in both the equilibrium and acceptor samples, the absorbance values approach the limit of detection, therefore limiting the range of the assay. As illustrated in Figure 4, analytical detection limits directly affect the range of the assay. For example, with the starting donor concentration at 100 µM, phenytoin was reported to have a Pe of almost 300 (x 10-6 cm2/s). The limit of detection with UV analysis was estimated at 200 (data not shown). These results are not consistent with a reported literature value1 of approximately 100 (x 10-6cm2/s). At 500 µM, phenytoin was measured to have a permeability of 137 (x 10-6 cm2/s), a permeability rate much more consistent with the literature and significantly elevated from detection limits. Maximizing compound concentrations in the donor wells proportionally increases the concentrations in the acceptor and equilibrium wells allowing for improved sample detection. Therefore, Pe values determined at the limit of aqueous solubility exhibit less data scatter and are more likely to be well above the limits of detection for the analytical method, resulting in improved reproducibility, reliability, and accuracy.1

Additionally, with the donor compartment of PAMPA at a concentration below a compound’s solubility limit, a disproportionate amount of that compound may be retained in the artificial membrane, perhaps as a function of the compound’s Log P, (i.e., the log of the ratio of octanol/water partitioning). Figure 5 illustrates the increase in the percentage of compound retained in the PAMPA membrane at 100 µM as compared to the percentage retained at the limit of solubility for the same compounds. Such retention greatly reduces the compound concentration in the acceptor compartment which can also contribute to increased data scatter and decreased detection reproducibility. 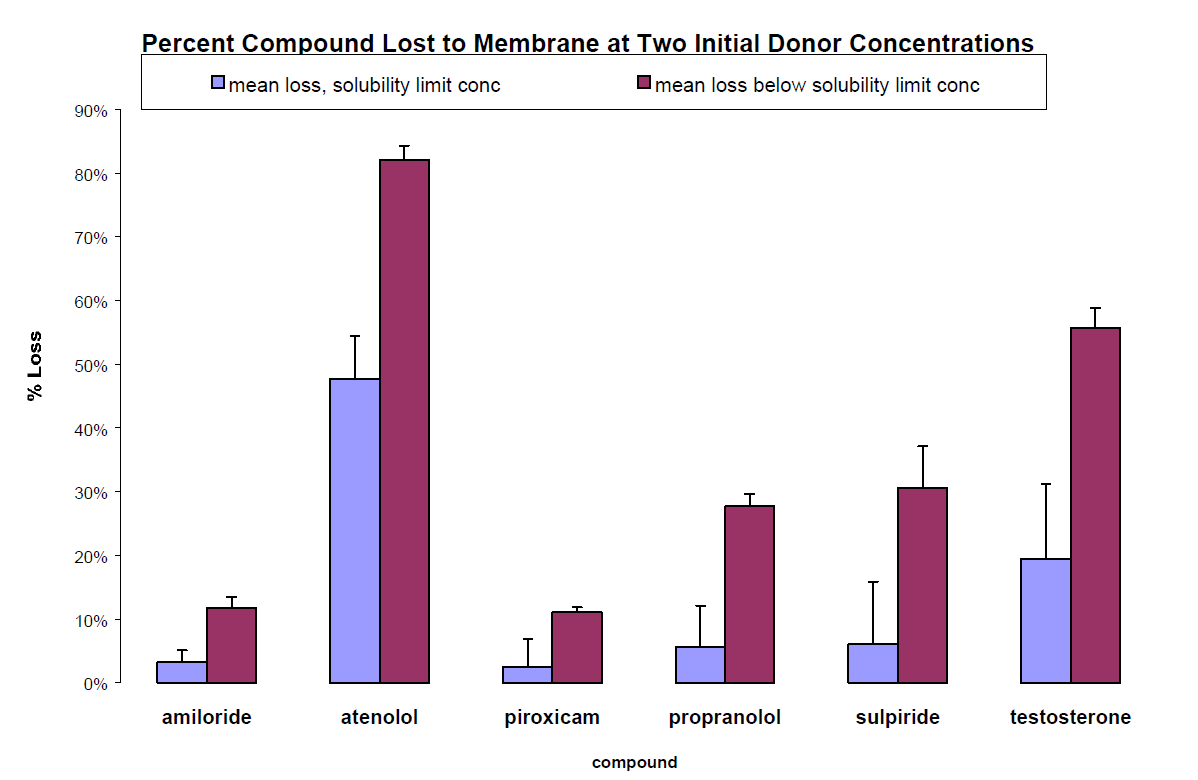 Figure 5. Membrane retention in phospholipid PAMPA. The percentage of compound retained the artificial membrane is increased when the donor concentration is below the limit of aqueous solubility

When measuring drug permeability above the limit of aqueous solubility, the compound will not remain completely soluble and will likely precipitate out in the donor compartment. The effects of this phenomenon are illustrated in Figure 6 When a compound is fully soluble, its concentration in the donor and acceptor wells will change over time as represented by curves A and B in Figure 6 If the compound in the donor compartment is above its limit of aqueous solubility, it is anticipated that as diffusion across the (artificial) lipid membrane occurs, the concentration in the donor compartment will not decrease but remain constant until all of the precipitated solids have been depleted. In this instance, it is expected that the concentration (as a function of time) in the two compartments would be represented by curves C and D of Figure 6. The measured permeability resulting from the increase in the acceptor compartment at time point t1 may be artificially elevated providing inaccurate data. At time point t2, the acceptor concentration would exceed the equilibrium concentration, therefore making it impossible to interpret the data.

Figure 6. The Effects of Determining Permeability At (6A) or Above (6B) the Limit of Aqueous Solubility. Legend: Eq = equilibrium; conc = compound concentration; t1 = time point 1; t2 = time point 2

Compounds with marginal to moderate aqueous solubility were examined in the Hexadecane PAMPA assay at both their limit of aqueous solubility and at a concentration of 500 µM (above their limit of aqueous solubility). The measured Pe values are presented in Figure 7. The apparent permeability determined from samples above the solubility limit are elevated for a majority of the compounds as compared to the results for those measured at the solubility limit. Not only is the Pe apparently elevated, but these values do not allow for an accurate ranking of compounds. For example, Irgasan is shown to have the highest permeability when analyzed above the solubility limit; but when tested at its limit of solubility, the measured permeability rate is greatly reduced and the rank for Irgasan is much lower. Finally, for the three compounds with the highest permeability rate at 500 µM in Figure 7, the concentration of the acceptor well exceeded the concentration at equilibrium. Accordingly, 4, 5, and 6 of the 12 replicate sample wells were unusable for β-estradiol, Irgasan and testosterone respectively. 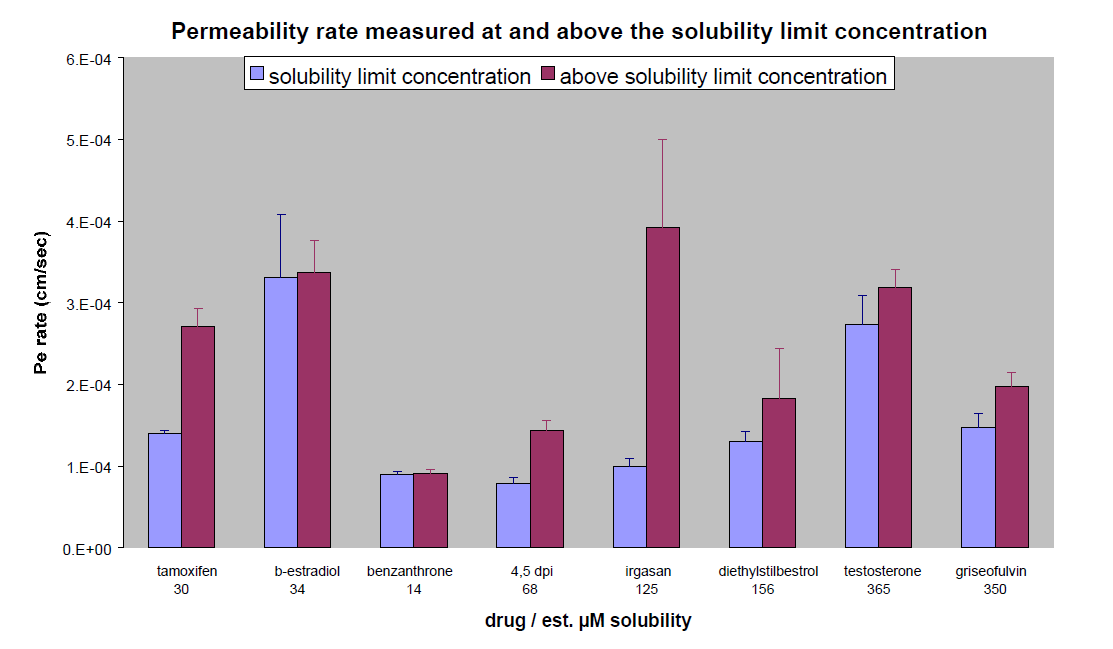 Figure 7:Permeability rates for a panel of compounds determined with the compound well above and at the solubility limit in the donor plate

In and of itself, the MultiScreen Solubility assay provides an automation-compatible, high throughput, and reliable method to determine compound solubility.  In the context of screening compounds for ADME properties, it can also be used as a sample preparation tool to produce solutions containing compounds of interest at their limit of aqueous solubility.  As demonstrated in this Applications Note, such solutions are ideal as the starting point for PAMPA assays.  Benefits to be derived by combining the two methods include improved sample throughput and an increase in the reliability and reproducibility of the permeability data.  In this suggested workflow, the concentration of the compound in the donor plate is the limit of its aqueous solubility rather than an arbitrary, fixed concentration (e.g., 100 or 500 µM as described by Faller and Kansy).  At the limit of aqueous solubility, the fraction of compound retained in the membrane is less likely to interfere with analysis and data interpretation.  Most importantly, problems associated with testing precipitated compound and trying to measure compounds below their limit of analytical detection are eliminated or reduced.  While this Applications Note focused on the benefits of performing non-cell based permeability assays at the limit of aqueous solubility, it is likely that at least some the same throughput and data quality enhancements would also apply to cell-based permeability models such as Caco-2.