The Role of Liver Transporters in Drug-Drug Interactions

Oral drug delivery involves dissolution in the small intestine and absorption across the enterocyte barrier into the portal vein followed by subsequent delivery through the liver into the systemic circulation. The liver therefore plays a vital role in all aspects of drug disposition, including absorption, metabolism, distribution, and excretion. The liver historically has been known as the major site of drug metabolism and as an important site for the elimination of drugs that are cleared through the biliary system and/or undergo enterohepatic recirculation. More recently attention has focused on the role hepatic uptake/efflux transporters may play in a number of hepatic toxicities and adverse drug-drug interactions. Drug-drug interactions occur when the uptake, efflux, or metabolism of a drug is impaired or enhanced by a second drug that interacts with the same drug metabolism enzyme or transporter pathway. Although studies traditionally focused on inhibition or induction of drug-metabolism enzymes (e.g., cytochromes P450 or CYPs) as the cause of drug-drug interactions, it has become increasingly evident they may also result from interactions with transporter function as well.1 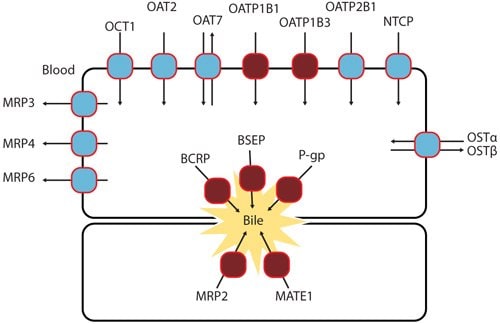 Drugs are absorbed into the liver from both the portal vein and the hepatic artery. There are numerous uptake transporters located on the liver plasma membrane including the organic anion transporting polypeptides (OATP1B1, 1B3, and 2B1), an organic cation transporter 1 (OCT1), the organic anion transporters (OAT2 and OAT7), and the sodium taurocholate co-transporting polypeptide (NTCP).2 The OATP transporters, in particular, have been associated with multiple clinical drug-drug interactions. For example, most statins, which are highly prescribed for lowering cholesterol, have been identified as substrates of OATP1B1. Impaired uptake of simvastatin into the liver due to either a drug-drug interaction or the presence of a genetic polymorphism resulting in reduced function of OATP1B1 are known to result in higher plasma concentrations of the drug and an enhanced risk of simvastatin-induced myopathy.3

Drug efflux from the liver occurs in two distinct locations; on the basolateral membrane where drugs are exported back into the systemic circulation and on the canalicular membrane where drugs are exported into bile. Basolateral membrane transporters include the multidrug resistance-associated proteins MRP3, MRP4, and MRP6 while the canalicular membrane transporters include the multidrug resistance 1 protein (MDR1 or P-gp), MRP2, breast cancer resistance protein (BCRP), multidrug and toxin extrusion protein 1 (MATE1), and the bile salt export pump (BSEP). Among the efflux transporters, inhibition of BSEP has been linked to cholestasis, both from known mutations resulting in genetic disease (e.g. familial intrahepatic cholestasis type 2) and from inhibition by a number of drugs, including bosentan and troglitazone.4 Approximately 30% of clinical drug-induced liver injury cases are attributed to cholestasis as the primary or contributing cause. In addition, observations of conjugated hyperbilirubinemia can be mechanistically explained by MRP2 inhibition and associated MRP3-mediated efflux from hepatocytes into blood.2

The study of hepatic transporters has traditionally been carried out using hepatocytes in suspension or plated cell formats for uptake assays while sandwich-cultured hepatocytes are used for efflux assays. In addition, many of these transporters have been overexpressed in immortalized cell lines or membrane vesicles for study of the properties of an individual transporter. However, it is difficult to fully understand the role of a given hepatic transporter in a drug’s disposition because of overlapping substrate specificities and lack of selectivity with currently available inhibitors. In order to address this current limitation, Sigma-Aldrich has utilized its CompoZr® zinc finger nuclease (ZFN) technology to create a series of knockout cell lines targeting individual hepatic uptake and efflux transporters. We are utilizing a metabolically competent human liver cell line as the parental line for these products. The initial cell lines will target the basolateral uptake transporters OATP1B1 and 1B3 as well as the canalicular efflux transporters MDR1, MRP2, BCRP, BSEP, and MATE1.

These novel knockout cell lines can be used to identify or clarify specific drug-transporter interactions by comparison of drug transport between the wild-type (WT) and knockout cell lines. These assays can be run without dependence on the use of chemical inhibitors and have the added advantage of being based in a cell line with active phase I and phase II metabolic pathways. These novel cell lines will be available in affordable vial format for pharmaceutical and biotechnology companies, academic instituitions, and contract research organizations.