The analysis of samples resulting from fuel and oil spills is different from the analyses routinely performed by either a petroleum or an environmental testing laboratory.

Once a fuel/oil is released into the environment, two factors may contribute to a decrease in its integrity:

For soil and water samples collected due to off-shore oil spills, leaking railroad tanker cars and highway tanker trucks after accidents, and underground storage tank (UST) remediation at service stations, it may be preferred to measure contamination by carbon range, instead of by fuel/oil type or individual analytes. The United States Environmental Protection Agency (US EPA), United States Coast Guard (USCG), American Society for Testing and Materials (ASTM), and several States have published methodologies for these purposes.

Several terms associated with the sampling and analyses of environmental samples for fuels/oils are currently used. Because there are many agencies with methods, there are many terms, resulting in ‘alphabet soup’ due to the vast number of acronyms. Also note that the same term may be used by multiple agencies but with slightly different meanings. While not inclusive, Table 1 represents an attempt to define some of the most common acronyms. While there are many methods, they can be grouped into three categories:

There are many terms, resulting in "alphabet soup" due to the vast number of acronyms.

♦ STARS is a State of New york document that provides guidence on the handling, disposal, and/or reuse of excavated pertroleum-contaminated soil, with analysis by GS-MS per US EPA Methods 8260, modified with short, specific analyte lists.

GRO-Like Analysis by Purge and Trap

Analysis of the volatile portion of fuels/oils typically requires calibration with several n-alkane and aromatic compounds. Some UST programs also require testing for lower molecular weight n-alkanes such as pentane, and for oxygenates such as methyl tert-butyl ether (MTBE).
Figure 1 shows a GRO-like chromatogram that includes an analyte list combined from several methods. 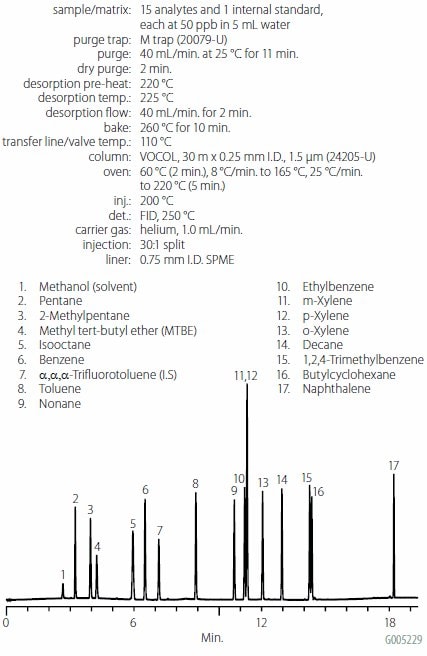 The analysis of soil samples often involves a methanol extraction, resulting in a large amount of methanol being transferred to the purge vessel. If retained by the purge trap, methanol can interfere with the detection of early eluting compounds when the trap is desorbed to the GC. The “M” purge trap is specially designed to retain the lighter analytes (pentane and MTBE), but not a significant amount of methanol. A VOCOL™ column was selected due to its ability to provide a short run time while maintaining resolution of critical pairs.

Most GRO-like methods require a purge and trap technique for sample introduction into the GC. US EPA Method 8015 also allows direct injection to be used in some instances (such as for high level samples). Figure 2 shows a chromatogram of our EPA GRO Mix. An SLB™-5ms column with a 1.0 μM film was used to help focus and retain 2-methylpentane. 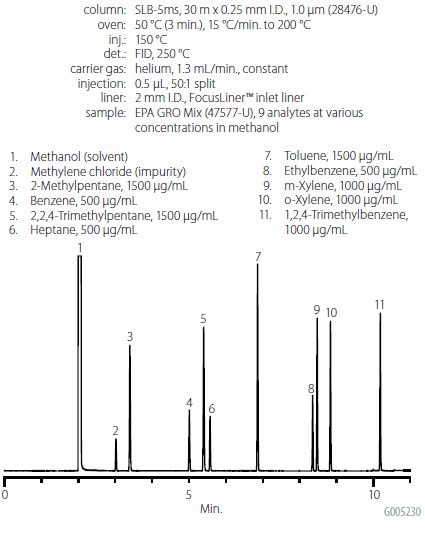 Methods for DRO-like are not too different from other work typically performed by environmental laboratories, requiring a solvent extraction and a concentration step prior to GC analysis. The main difference is in the data processing. Figure 3 shows a DRO-like chromatogram with 10 analytes, a surrogate, and an internal standard. A short, narrow bore SLB-5ms column was used to reduce analysis time to less than 15 minutes. 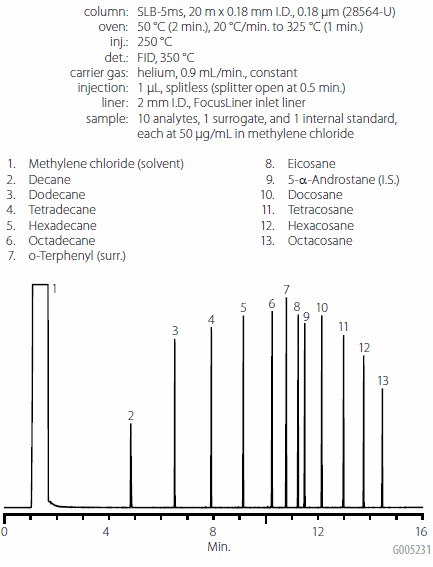 Figure 4 shows the analysis of C6-C44 n-alkanes on the SLB-5ms. The composition of the standard represents a carbon range that meets/exceeds the range typically used for TPH analysis. The stability of the SLB-5ms allowed for the use of a high final oven temperature of 360 °C, reducing the elution time of the final C44 hydrocarbon. 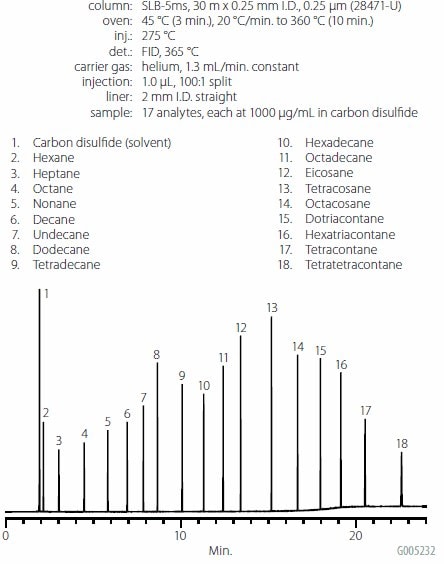 The analytical methods required to process samples from a fuel/ oil spill incident differ from the methods typical performed in either petroleum or environmental laboratories. Once released into the environment, the fuel/oil is no longer pure enough for pattern recognition, but is too complex for identification and quantitation of individual analytes. A multitude of methods exist to handle these unique sample types.

As confusing as it seems to untangle the many acronyms, there are just three types of analyses: GRO, DRO, and TPH. The published methods are simply variations of these to meet the different analytical needs of the individual agencies. Of utmost importance is to follow the exact methodology required by the regulatory group that will be validating the data reports.