A workflow has been developed to provide low artifact formation during the digestion of monoclonal antibodies. This workflow offers the following:

Careful and thorough characterization of therapeutic monoclonal antibodies (mAbs) is essential for ensuring product safety and efficacy. This assurance is achieved by establishing a number of critical quality attributes (CQAs) for each therapeutic protein, followed by demonstration that each batch of the material is found within acceptable limits. This strategy holds for both innovator therapeutics as well as biosimilars being considered for approval. In this application note, we perform an analysis of the innovator mAb Humira (adalimumab).

Peptide mapping, a bottom-up approach to protein characterization, enables the profiling of a protein’s primary structure as well as its post-translational modifications (PTMs) such as oxidation, deamidation, and glycosylation. The use of a high-resolution mass spectrometry-based approach for the characterization is commonly referred to as a multi-attribute method (MAM)1, as the peptide mapping analysis yields multiple pieces of information about the protein in a single analysis. This type of method is important for the comprehensive and accurate characterization of therapeutic proteins as it can yield both qualitative and quantitative information. In addition, minimizing protein degradation during sample preparation, such as amino acid oxidation and deamidation, is also crucial in obtaining an accurate depiction of the therapeutic protein.2

The method uses filter-assisted sample preparation (FASP)3, along with a proprietary buffer solution that minimizes amino acid oxidation and deamidation. The FASP based approach is advantageous as it reduces the multiple rounds of washing needed for detergent or reagent removal. Briefly, proteins are denatured, reduced, and alkylated, before their digestion in a small molecular weight cut-off (MWCO) cartridge.

Denaturation makes the proteins more accessible to enzymatic digestion by unfolding them from their native state. The reduction step, carried out with Tris (2-carboxyethyl) phosphine hydrochloride (TCEP), further exposes the protein by breaking the disulfide bonds linking different segments of the protein. In the alkylation step, iodoacetamide (IAM) reacts with free thiol groups to prevent the reformation of disulfide bonds. A highly specific protease, trypsin, is used to cleave the protein into suitably sized peptides, although a combination of multiple proteases may also be used to generate more complete PTM site information. Following digestion, peptides and glycopeptides are separated and analyzed by RP-LC-MS.M.

To determine the suitability of an instrument for RPLC-MS analysis, a mixture of 14 isotopically labeled peptides is analyzed as a system suitability test prior to each run.

In some cases, it may be of interest to quantify specific mAbs in a sample after digestion. For this purpose, isotopically labelled adalimumab, as well as several other mAbs, are available for use as internal standards in quantitation. The main advantage of using such internal standards is the tracking and accounting of every step of the sample preparation and analysis procedure by the heavy mass label.

The sample preparation is performed in a 30 kDa molecular weight cut-off filter cartridge as this simplifies the washing and removal of reagents. The filter membrane retains the mAb of interest until the digestion procedure is complete, following which peptides can pass through the filter while excluding trypsin. The illustration below depicts the sample preparation steps.

This product comes ready for use at 1 mg/mL concentration and can be stored at 2-8 °C up to two years.

This product is ready for use and can be stored at 2-8 °C up to two years.MSRT1 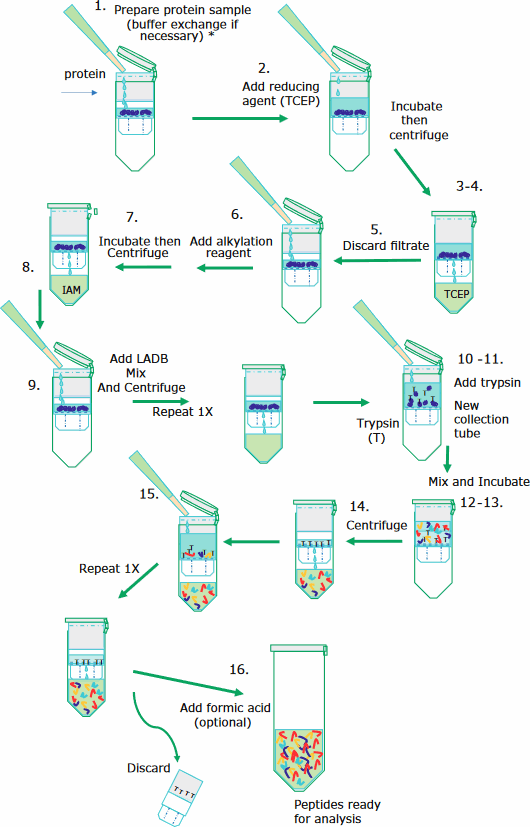 mAbs are denatured, reduced, alkylated, and digested as follows:

The raw MS files were subjected to BioPharma Finder™ 3.0 (Thermo Fisher Scientific) for peptide mapping. Peptide identifications were performed by searching the processed data against the adalimumab sequence. The search parameters used are as follows: Trypsin with medium specificity as a selected protease, carboxymethylation (+58.005 Da) was set as a static modification of Cys residues, oxidation (+15.995 Da) of Met and Trp, deamidations (+0.984 Da) of Asn and Gln, pyroglutaminated Glu (−18.011 Da) of N-terminal Glu, residual C-terminal Lys (+128.095 Da), and common monoclonal antibody glycosylations such as G0, G0F, G1F, G2F set as variable modifications. The data was filtered to report only the peptides with a mass tolerance of ±15 ppm.

For each batch of samples analyzed, it is good practice to evaluate instrument performance through the use of a system suitability test, Figure 1. MSRT1 is an injection ready standard of 14 synthetic peptides that serves to evaluate LC-MS system performance, compare LC gradients and columns, or monitor other system changes. MSRT1 has also been used to predict retention times of peptides across LC-MS platforms.4 Each peptide incorporates a heavy isotope labelled amino acid to eliminate the chance of interfering with peptides occurring in samples. MSRT1 can be used in multiple reaction monitoring (MRM) experiments and a list of suggested transitions is available on the product page at www.sigmaaldrich.com.

Figure 1 shows a chromatogram of MSRT1 and demonstrates the separation obtained for this set of peptides under the chromatographic conditions utilized. Many laboratories will inject a standard such as this to evaluate system performance before, during, and at the completion of a sample set. 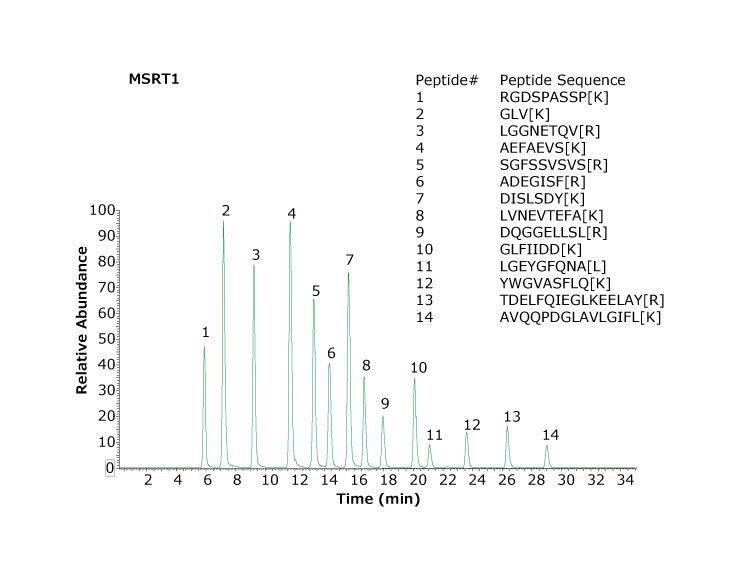 Traditional peptide mapping procedures used for LC-MS are often cumbersome and involve overnight protease digestion of the sample at elevated pH and temperature. Asparagine deamidation and methionine oxidation can take place during these steps, the extent of which depends on the conditions, such as reagent used, ionic strength, temperature, pH, incubation time, digestion buffer, and presence of trace metals (in the case of methionine oxidation).5 The method provided here minimizes artifact formation to obtain a more accurate determination of endogenous levels of deamidation and oxidation. In addition, the entire process is simplified with the use of Microcon® MWCO filters.

Figure 2 shows the chromatographic profile obtained using the columns and instrument conditions described including identification of very hydrophilic peptides. Coupling two columns together provides slightly better retention of hydrophilic peptides and is possible due to the lower backpressures obtained with Fused-Core® particles. The glycopeptide eluting at 24.03 min produced the spectrum and results shown in Figure 3. Figure 2.Base peak chromatogram of adalimumab tryptic peptides. Heavy chain glycosylated peptide (EEQYN301STYR) is observed at 24.03 min. Using a dual column set up, we observe hydrophilic peptides such as PGK, SCDK, VDK eluting at 3.95, 2.57, and 2.76 min, respectively. An example peptide and its oxidized form are NSLYLQM83NSLR and NSLYLQMNSLR and eluting at 49.30 and 64.16 min, respectively. 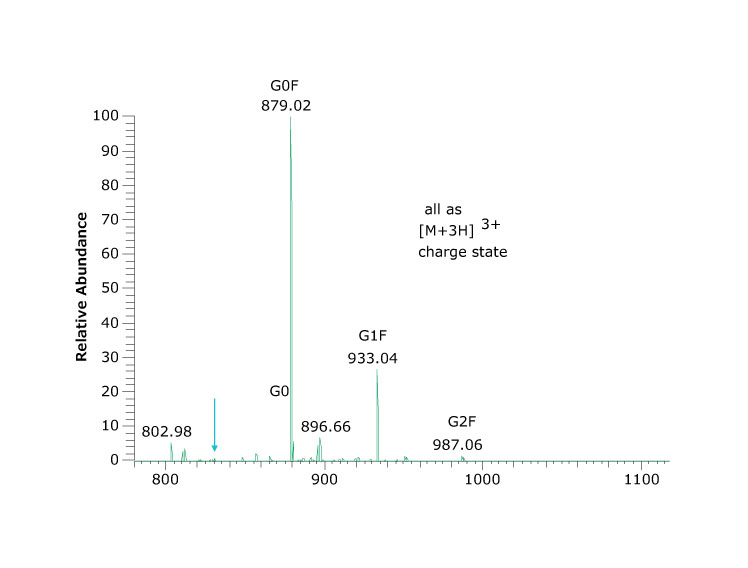 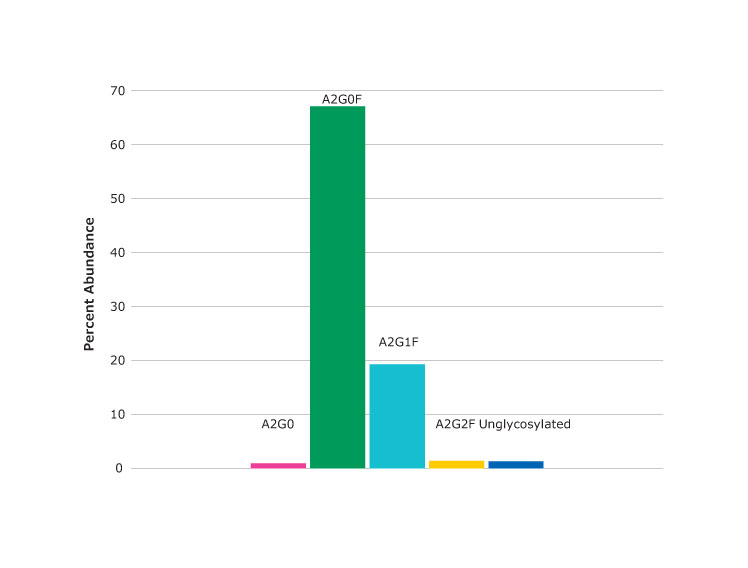 Figure 3.Spectrum (top) and percent abundance (bottom) of glycans found at asparagine N301, the peptide glycoforms shown in Figure 2 as peak at 24.03 minutes. 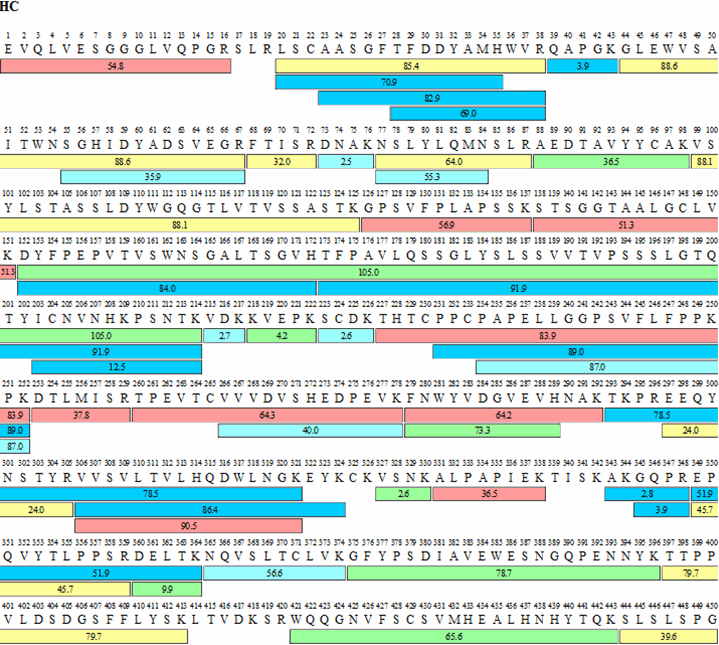 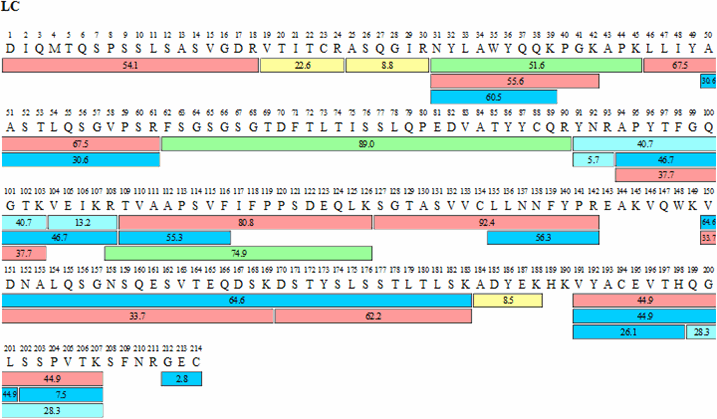 Figure 4.Sequence map for adalimumab heavy (HC) and light chains (LC) obtained by FASP tryptic digestion and chromatographic procedures described. The numbers within each bar indicate retention times for each peptide while the color indicates signal intensity according to scheme shown.

The low artifact digestion buffer and procedure described helps to minimize the oxidation and deamidation that can occur during the sample preparation stage. In this procedure, essentially no deamidation was observed (at less than 1%). Oxidation was found at several methionine locations, as shown in Figure 5, but at less than 5%. Figure 6 shows the peptide containing the M83 oxidation site (labeled). The chromatogram in Figure 6 shows an example of a missed cleavage although these were not found at levels considered significant. 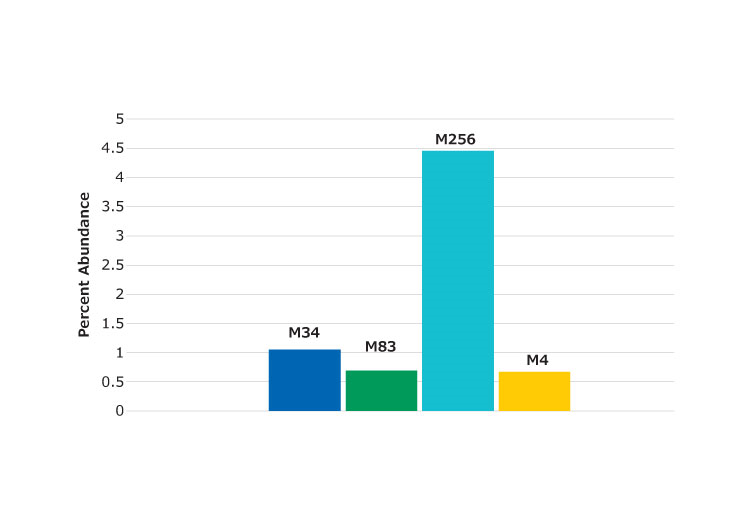 Figure 5.Percent of oxidized peptides found relative to unoxidized form. Labels denote the location of the methionine residue in the protein. 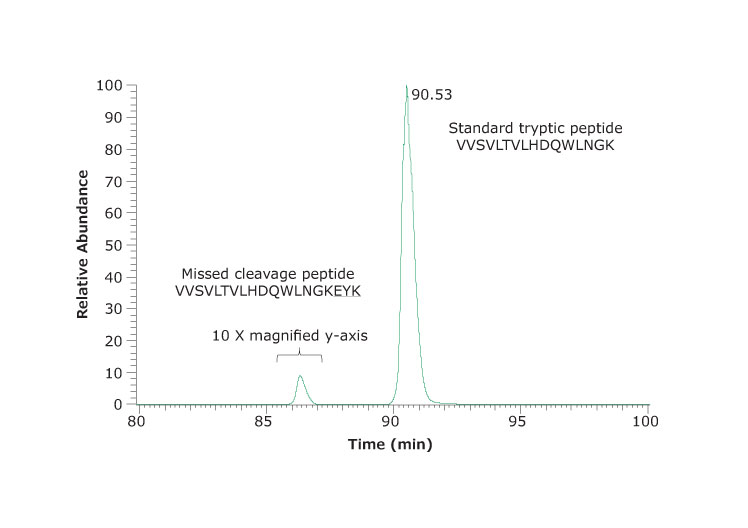 A complete LC-MS/MS workflow has been developed for peptide mapping of monoclonal antibody therapeutics. This workflow offers the following:

Adalimumab digestion is performed in four hours with greater than 93% sequence coverage. The digestion buffer was developed specifically to minimize deamidation and oxidation during the digestion step without sacrificing the digestion efficiency. The buffer pH is optimized for digestion and contains a proprietary antioxidant.

The determination of several glycoforms during the chromatographic run also demonstrates the multi-attribute aspect of peptide mapping.