A complete workflow based on UHPLC-FLR-MS is developed to analyze the N-glycan profile. The workflow offers the following:

Careful and thorough characterization of therapeutic mAbs is essential to ensuring drug safety and efficacy. Hence, establishing several critical quality attributes (CQAs) for each therapeutic protein, and demonstrating that production batches are within acceptable limits, is necessary for both innovator and biosimilar therapeutics. In this application note, we describe glycan analysis of the innovator mAb adalimumab (Humira) as well as a recombinant mAb of the same sequence.

Monoclonal antibodies (mAbs) are target specific and have high efficacy and few side effects. Glycosylation is one of the most common and important post translational modifications for mAbs. Glycans attached to the antibodies play an important role in the pharmacokinetics, efficacy, and safety of therapeutic adalimumab. Glycosylation involves the attachment of glycans at specific sites on a protein, most commonly at asparagine (Asn, N-linked) or serine/threonine (Ser/Thr, O-linked) amino acid residues. There are two types of glycosylation; N-linked glycosylation and O-linked glycosylation, and both types are important for protein conformation, protein activity, providing protection from proteolytic degradation, and intracellular trafficking and secretion. N-glycan moieties also play a key role in the folding, processing, and secretion of proteins from the endoplasmic reticulum (ER) and the golgi apparatus. Based on the large influence of glycosylation on protein function, an accurate study and analysis of glycans is essential. Protein glycosylation is specifically mentioned in established technical guidelines, e.g., ICH Q5E and Q6B and FDA’s published guidance for industry titled “Development of Therapeutic Protein Biosimilars”.

There are four options to approach N-glycan analysis: intact glycoproteins, glycopeptides, released glycans, or monosaccharides. This article focuses on the analysis of released N-glycans by UHPLC, combined with fluorescence (FLR) and mass spectrometric (MS) detection. The analysis of released N-glycans presented here is one of the most powerful and commonly used approaches for glycan composition analysis. Fluorescent derivatization allows relative quantification of percent abundances of glycan species by fluorescence detection. Among fluorescent derivatization molecules, procainamide offers one of the best signals, surpassing the more traditional 2-AB and 2-AA labeling. In addition, procainamide bears a tertiary amine giving it good ionization for glycan characterization by electrospray mass spectrometry. Hydrophilic interaction liquid chromatography (HILIC) is a proven technique for the separation and quantitation of glycans and has notable advantages over the other HPLC separation modes (e.g. reversed-phase, anion exchange). In this protocol, a BIOshell™ Glycan HPLC column is used to analyze adalimumab N-glycans labeled with procainamide.

Adalimumab is a recombinant human IgG1 monoclonal antibody (mAb) specific for human tumor necrosis factor (TNF). It has a molecular mass of about 150 kDa and is N-glycosylated on the Fc region.

Two samples are analyzed and compared using the following protocol:

The workflow, including glycan release, labelling, and SPE clean-up, is also performed on an IgG purified from human serum (hIgG) as a control handled alongside other samples.

A procainamide labelled dextran hydrolysate is used for a glucose unit (GU) ladder to assist with interpretation of sample glycans. When analyzed on the BIOshell™ Glycan HPLC Column, the GU ladder gives a characteristic profile, from monomeric glucose to approximately a 20-mer of glucose oligosaccharide. The ladder provides calibration reference points that can aid in identifying more complex glycans based upon retention characteristics.

Prior to the analysis, samples are reconstituted to a concentration of 1 mg/mL in water and 200 µg of each protein is used for N-glycan analysis.

Dried samples are labelled with procainamide in a one-pot reductive amination solution, purified by normal-phase SPE[CM3], and the resulting labelled product is then dried again. Glycans are solubilized in 50 µL of 25% 75 mM ammonium formate/75% acetonitrile (v/v) prior to UPLC-FLR-MS.
Note: All preparation and labeling must be performed in a fume hood except for weighing reagents. Prepare the incubation block by moving to the fume hood and set the temperature to 65 °C.

LC peaks are identified by their level of residue composition (Table 1) from the calculated glucose unit (GU) of their elution. GU levels are determined for each LC feature’s retention time by interpolation to a 5th-order polynomial standard curve of the dextran hydrolysate ladder chromatogram (Figure 1). Glycan assignment is done by comparing the GU values to a custom database of glycan GU values for the BIOshell™ column. The dextran ladder is analysed via UHPLC FLR-MS after every fifth sample to correct for any retention time shifts. For relative quantification, fluorescence peak areas are normalized to the sum of all identified glycan fluorescence peak areas. The limit of quantification (LOQ) is defined as 0.5% of the most abundant peak area. This parameter allows for compositions less than 0.5% of the total peak area because composition is normalized to the sum of all peak areas. The peak area is calculated using Xcalibur Qual Browser. For general sample analysis, the Thermo Xcalibur Qual Browser software retrieves and records the base peak intensity for each sample.

The procainamide-labeled dextran GU ladder and control acquisitions demonstrated that the UHPLC-FLR system and column were suitable to resolve and identify labelled oligosaccharides, as per the four system suitability requirements shown in Table 2. First the workflow, including glycan release, labelling, and SPE clean-up, was tested with hIgG and found to be acceptable, with 14 common hIgG glycans detected. A minimum of 10 hIgG glycan identifications are required. The second system suitability requirement was also met; peaks G1F (1,6) and G1F (1,3) were observed to be partially resolved in the fluorescence chromatogram (Figure 1). Although resolution between the G1F (1,6) and G1F (1,3) peaks was not complete, they could be visually differentiated upon magnification. The third system suitability requirement was also met by the hIgG control. The relative abundances of a representative subset of glycans from this sample gave an R2 correlation of 0.99 with the historical glycan profile. Finally, the slope created during analysis of the hIgG control was observed to be 0.99, which is within the slope requirement of 1.00 ± 0.07. 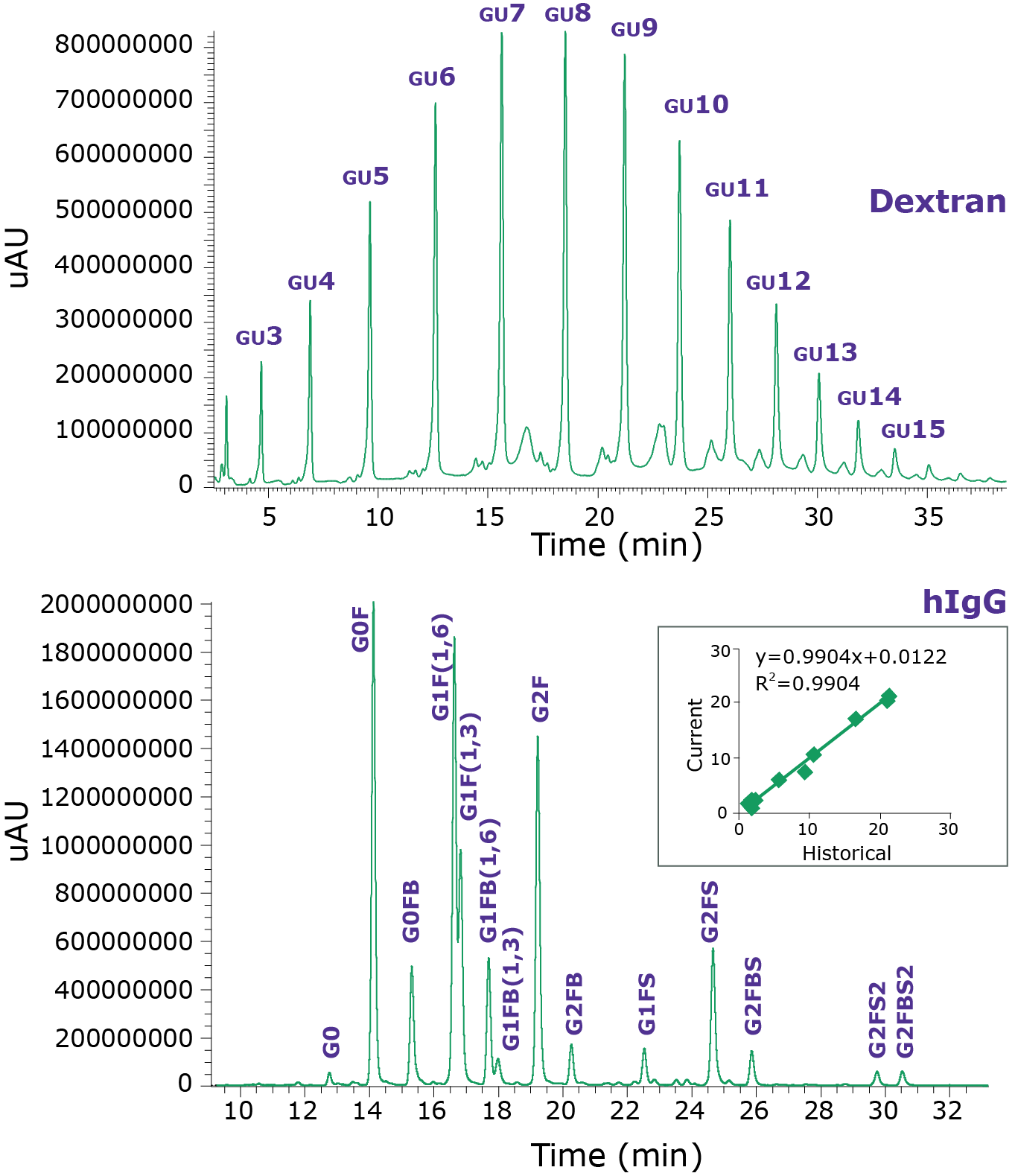 Figure 1.Fluorescence chromatograms of procainamide-labeled dextran GU ladder and hIgG control. Top pane: annotations indicate the number of glucose units (GU) in each dextran hydrolysate-procainamide feature. Each feature of the control hIgG in the bottom pane was similarly identified. The inset shows the correlation of the glycan features’ relative compositions with the historical values of previous hIgG data.

Sixteen glycan features for adalimumab samples were quantified. Table 3 contains glycan compositions for all the samples. Figure 2 illustrates the fluorescence chromatograms for each sample type of adalimumab. Overall, the N-glycan profiles are broadly similar, but some differences exist in the observed relative compositions of some components. Table 4 illustrates the structures of the observed glycans. The area under the peaks of glycans in the TIC chromatogram are summed and MS spectra were created to confirm the mass of glycans. Figure 3 shows the typical examples of MS spectra. 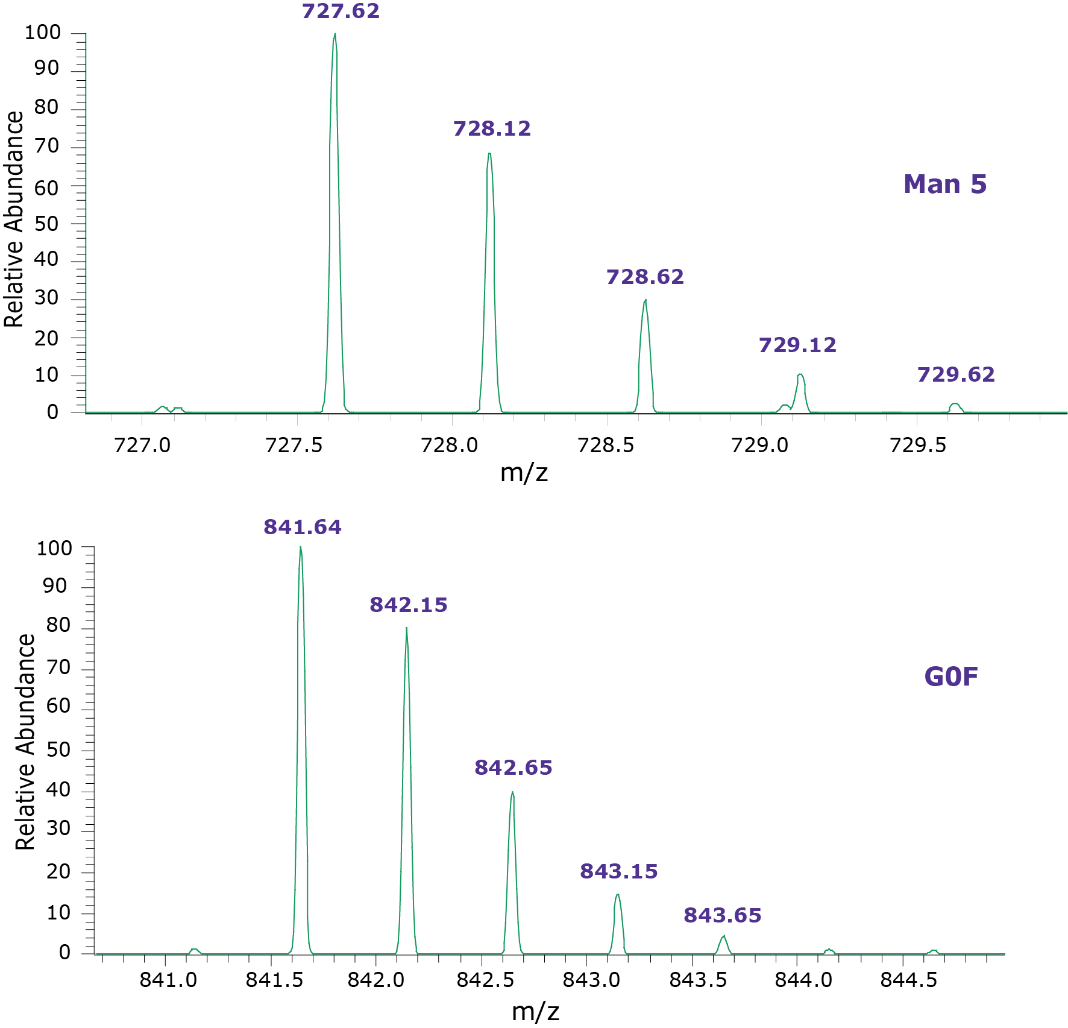 A complete UHPLC-FLR-MS workflow has been developed to simplify the analysis of N-linked glycans. This workflow offers the following:

A total of 16 glycan features were quantified for the mAb adalimumab. The glycan profile, including the qualitative and quantitative aspects, is comparable to the results found by other analytical laboratories. 1, 2

Characterizing and monitoring the glycosylation pattern of therapeutic mAbs is required by regulatory authorities to ensure efficacy and safety of these drugs.

This detailed protocol can be used for the analysis of N-linked glycans of mAbs and for complex and heterogenous glycoproteins.