Challenges in detection of VBNC bacteria by common culture methods

Culturing is one of the fundamental steps in microbiology. The plate count technique is a standard culturing method to enumerate viable bacteria. However, many bacterial cells could enter a distinct state called the viable but non-culturable (VBNC) state. The term “viable but nonculturable bacteria” or “not immediately culturable” describes cells that cannot normally be cultured. In most cases, the non-spore-forming bacteria are in a survival state (e.g., resting, dormancy, quiescence, or debilitation) with the active metabolic pathways, but the organisms are not growing.

According to the latest definition, Viable but non-culturable cells are considered viable and potentially replicative. However, the current methods used for resuscitation lack knowledge. With special media or certain supplements, it has been demonstrated that there are possibilities to recover them. VBNC bacteria have been often exposed to conditions like heating, drying, setting under high osmotic pressure (high salt content), or contact with inhibiting chemicals resulting in sensitive cells or sub-lethally damaged cells. This could be by the loss of some ribosomes, damaged enzymes, cell membranes, and other problems causing malfunctions in cells.

In recent years many species of Vibrio cholerae, E. coli, Campylobacter jejuni, Salmonella spp., Listeria monocytenenes, and Yersinia enterocolitica have been reported to be viable but non-culturable (VBNC) state1-10. It is important to note that bacteria that enter the VBNC state may become culturable again, and thus this state may be reversibly called “resuscitation” to describe the recovery of non-culturable cells. It was found that resuscitation can be mediated by a physical stimulus like temperature upshift and different kinds of chemical stimuli, including gas mixtures, amino acids, rich media, Supplements, etc. Additions of supplements to the re-enriched or enriched media have enabled to improve the recovery of many VBNC cells. 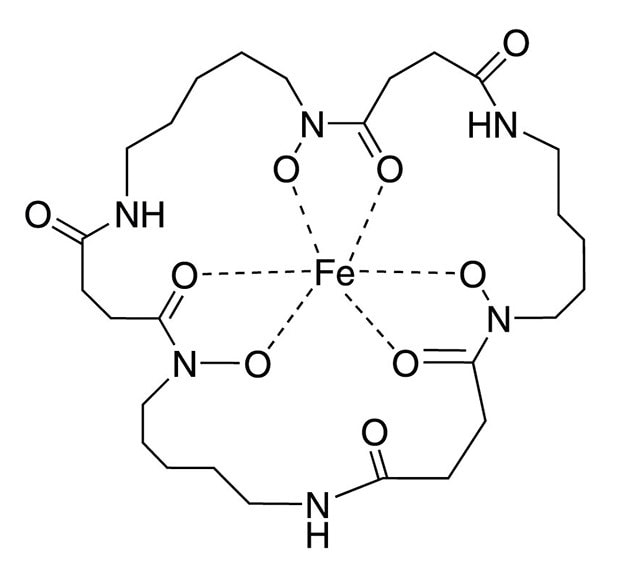 Ferrioxamine E, an organo-metallic natural trihydroxamate siderophore, is used as an effective growth factor in culturing many VBNC cells. Supplementing the pre-enrichment and enrichment broths with ferrioxamine E significantly improved the recovery of Salmonella, Cronobacter spp., Staphylococcus aureus, and Yersinia enterocolitica from artificially or naturally contaminated foods1-3. A concentration of ferrioxamine E in the range of 5-200 ng/ml supports growth (Table 1). Ferrioxamine E provides the essential micro-nutrient iron (III) to the organisms that reduce the lag phase in the medium and reactivates the damaged bacterial cells. Ferrioxamine E in Buffered Peptone Water is the medium recommended by the ISO-Norms for Enterobacteriaceae. The motility of Salmonella is also improved, enabling their identification by semisolid selective motility media like MRSV, DIASSALM, or SMS.