Liposomes (lipid vesicles) are formed when thin lipid films or lipid cakes are hydrated and stacks of liquid crystalline bilayers become fluid and swell. The hydrated lipid sheets detach during agitation and self-close to form large, multilamellar vesicles (LMV) which prevents interaction of water with the hydrocarbon core of the bilayer at the edges. Once these particles have formed, reducing the size of the particle requires energy input in the form of sonic energy (sonication) or mechanical energy (extrusion). 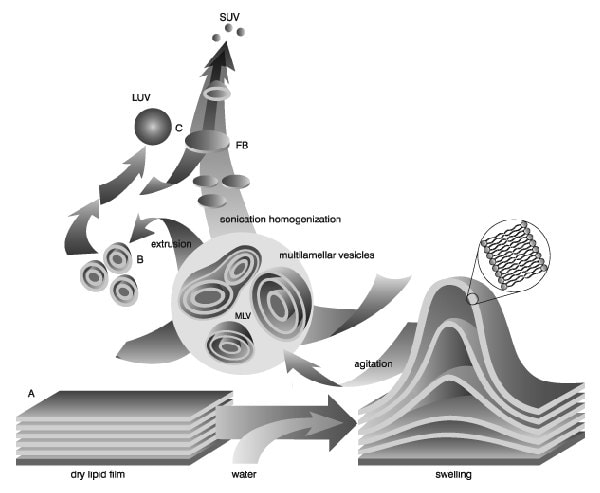 Properties of lipid formulations can vary depending on the composition (cationic, anionic, neutral lipid species), however, the same preparation method can be used for all lipid vesicles regardless of composition. The general elements of the procedure involve preparation of the lipid for hydration, hydration with agitation, and sizing to a homogeneous distribution of vesicles.

A. Preparation of Lipid for Hydration

When preparing liposomes with mixed lipid composition, the lipids must first be dissolved and mixed in an organic solvent to assure a homogeneous mixture of lipids. Usually this process is carried out using chloroform or chloroform:methanol mixtures. The intent is to obtain a clear lipid solution for complete mixing of lipids. Typically lipid solutions are prepared at 10-20mg lipid/ml organic solvent, although higher concentrations may be used if the lipid solubility and mixing are acceptable. Once the lipids are thoroughly mixed in the organic solvent, the solvent is removed to yield a lipid film. For small volumes of organic solvent (<1mL), the solvent may be evaporated using a dry nitrogen or argon stream in a fume hood. For larger volumes, the organic solvent should be removed by rotary evaporation yielding a thin lipid film on the sides of a round bottom flask. The lipid film is thoroughly dried to remove residual organic solvent by placing the vial or flask on a vacuum pump overnight. If the use of chloroform is objectionable, an alternative is to dissolve the lipid(s) in tertiary butanol or cyclohexane. The lipid solution is transferred to containers and frozen by placing the containers on a block of dry ice or swirling the container in a dry ice-acetone or alcohol (ethanol or methanol) bath. Care should be taken when using the bath procedure that the container can withstand sudden temperature changes without cracking. After freezing completely, the frozen lipid cake is placed on a vacuum pump and lyophilized until dry (1-3 days depending on volume). The thickness of the lipid cake should be no more than the diameter of the container being used for lyophilization.Dry lipid films or cakes can be removed from the vacuum pump, the container close tightly and taped, and stored frozen until ready to hydrate. 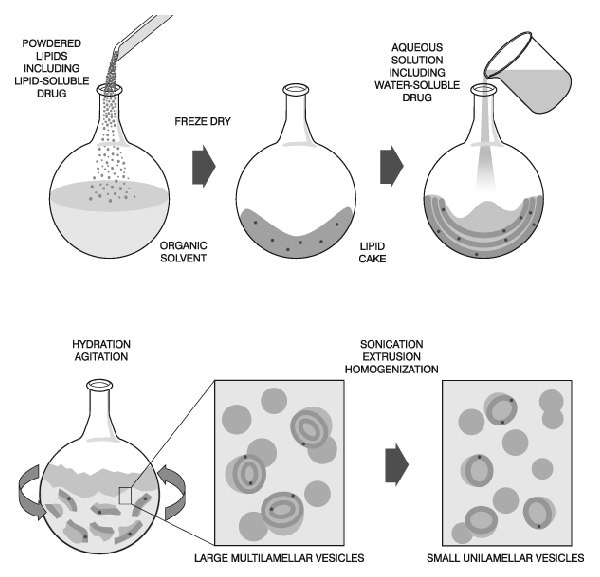 B. Hydration of Lipid Film/Cake

Hydration of the dry lipid film/cake is accomplished simply by adding an aqueous medium to the container of dry lipid and agitating. The temperature of the hydrating medium should be above the gel-liquid crystal transition temperature (Tc or Tm) of the lipid with the highest Tc before adding to the dry lipid. After addition of the hydrating medium, the lipid suspension should be maintained above the Tc during the hydra tion period. For high transition lipids, this is easily accomplished by transferring the lipid suspension to a round bottom flask and placing the flask on a rotory evaporation system without a vacuum. Spinning the round bottom flask in the warm water bath maintained at a temperature above the Tc of the lipid suspension allows the lipid to hydrate in its fluid phase with adequate agitation. Hydration time may differ slightly among lipid species and structure, however, a hydration time of 1 hour with vigorousshaking, mixing, or stirring is highly recommended. It is also believed that allowing the vesicle suspension to stand overnight (aging) prior to downsizing makes the sizing process easier and improves the homogeneity of the size distribution. Aging is not recommended for high transition lipids as lipid hydrolysis increases with elevated temperatures.

The hydration medium is generally determined by the application of the lipid vesicles. Suitable hydration media include distilled water, buffer solutions, saline, and nonelectrolytes such as sugar solutions. Physiological osmolality (290 mOsm/kg) is recommended for in vivo applications. Generally accepted solutions with meet these conditions are 0.9% saline, 5% dextrose, and 10% sucrose. During hydration some lipids form complexes unique to their structure. Highly charged lipids have been observed to form a viscous gel when hydrated with low ionic strength solutions. Thumbnail The problem can be alleviated by addition of salt or by downsizing the lipid suspension. Poorly hydrating lipids such as phosphatidylethanolamine have a tendency to self aggregate up on hydration. Lipid vesicles containing more than 60 mol% phosphatidylethanolamine form particles having a small hydration layer surrounding the vesicle. As particles approach one another there is no hydration repulsion to repel the approaching particle and the two membranes fall into an energy well where they adhere and form aggregates. The aggregates settle out of solution as large floculates which will disperse on agitation but reform upon sitting. The product of hydration is a large, multilamellar vesicle (LMV) analogous in structure to an onion, with each lipid bilayer separated by a water layer. The spacing between lipid layers is dictated by composition with poly-hydrating layers being closer together than highly charged layers which separate based on electrostatic repulsion. Once a stable, hydrated LMV suspension has been produced, the particles can be downsized by a variety of techniques, including sonication or extrusion.

Disruption of LMV suspensions using sonic energy (sonication) typically produces small, unilamellar vesicles (SUV) with diameters in the range of 15-50nm. The most common instrumentation for preparation of sonicated particles are bath and probe tip sonicators. Cup-horn sonicators, although less widely used, have successfully produced SUV. Probe tip sonicators deliver high en-ergy input to the lipid suspension but suffer from overheating of the lipid suspension causing degradation. Sonication tips also tend to release titanium particles into the lipid suspension which must be removed by centrifugation prior to use. For these reasons, bath sonicators are the most widely used instrumentation for preparation of SUV. Sonication of an LMV dispersion is accomplished by placing a test tube containing the suspension in a bath sonicator (or placing the tip of the sonicator in the test tube) and sonicating for 5-10 minutes above the Tc of the lipid. The lipid suspension should begin to clarify to yield a slightly hazy transparent solution. The haze is due to light scattering induced by residual large particles remaining in the suspension. These particles can be removed by centrifugation to yield a clear suspension of SUV. Mean size and distribution is influenced by composition and concentration, temperature, sonication time and power, volume, and sonicator tuning. Since it is nearly impossible to reproduce the conditions of sonication, size variation between batches produced at different times is not uncommon. Also, due to the high degree of curvature of these membranes, SUV are inherently unstable and will spontaneously fuse to form larger vesicles when stored below their phase transition temperature.

Lipid extrusion is a technique in which a lipid suspension is forced through a polycarbonate filter with a defined pore size to yield particles having a diameter near the pore size of t Thumbnail he filter used. Prior to extrusion through the final pore size, LMV suspensions are disrupted either by several freeze-thaw cycles or by prefiltering the suspension through a larger pore size (typically 0.2µm-1.0µm). This method helps prevent the membranes from fouling and improves the homogeneity of the size distribution of the final suspension. As with all procedures for downsizing LMV dispersions, the extrusion should be done at a temperature above the Tc of the lipid. Attempts to extrude below the Tc will be unsuccessful as the membrane has atendency to foul with rigid membranes which cannot pass through the pores. Extrusion through filters with 100nm pores typically yields large, unilamellar vesicles (LUV) with a mean diameter of 120-140nm. Mean particle size also depends on lipid composition and is quite reproducible from batch to batch.