Two problems with acetic acid quantification are its low molecular weight and high volatility. In 1995 Pan et al (5) proposed making the 1-pyrenyldiazomethane (PDAM) derivative on a solid phase microextraction (SPME) fiber as a passive sampling technique for acetic and other carboxylic acid vapors. The PDAM-esters could then be analyzed by GC. The PDAM, synthesized by Nimura et al (6) in 1988 is an ideal derivatization agent for acetic acid. The reaction occurs readily at ambient temperatures without catalysts and the PDAM-ester derivative is stable over a wide temperature and humidity range.

To make the sampling reproducible and permit measurement of the TLV-TWA for VOCs (including carboxylic acids), Martos and Pawliszyn (7) recommended setting the PDMA-coated SPME fiber in the needle housing at a defined and constant of 0.1 to 3.5 cm. This provides the opportunity to increase the sampling time of the vapors without saturating the SPME fiber, as well as to create a small diffusion chamber (0.00086 cm2) that is not affected by variation in air speed flow.

The aim of the work presented here is to measure the exposure to acetic acid vapors in a workplace environment and compare the results obtained with SPME (passive) and activated charcoal (active) sampling techniques.

Workers in cytology labs are exposed to large amounts of acetic acid vapor because it is a commonly used fixative agent. Air samples were taken below the breathing zone from ten cytology lab workers over a 240 minute period during the preparation of the 1:3 v/v acetic acid:ethanol fixing solution and the slides themselves.

An 85 μm polyacrylate SPME fiber (Supelco) was treated for 60 minutes with a solution of 1-pyrenyldiazomethane (PDAM), 5 mg/ml in n-hexane. The treated fiber was withdrawn a fixed distance (Z = 0.3 cm) into the needle housing. The treated fiber assemblies were then affixed to the workers at a prescribed distance below their breathing zone.

After the 240-minute exposure time the PDAM-acetic acid derivatives were desorbed from the SPME fiber at 300 °C in a GC injector (Varian model CP-3800). For GC/MS detection, analytes were resolved on an Equity-5 capillary column, 30m x 0.25 mm ID, 0.25 μm df (Supelco) and detected on a Saturn 2200 EI-CI MS (Varian). For GC/FID detection, a Supelco SPB-5 capillary column, 30m x 0.25 mm ID x 1.0 μm df was used. Conditions appear in the Table 1 below. The limit of quantification (LOQ) for acetic acid was found to be 0.2 ng for the MS/EI method and 3.0 ng for the GC/FID method. Both values subtracted the contribution from the blank reagent baseline.

Solvent desorption tubes (ORBO 32, Supelco) packed with activated charcoal were used in the active sampling system. The sampling apparatus was affixed to the workers proximal to the SPME assembly. The personal air sampling pump was set at 200 ml/min and air was sampled for 240 minutes (48L sampled). After sampling, the ORBO tubes were treated with thionyl chloride and aniline to form the corresponding anilide derivative of acetic acid. Analysis of the anilide derivative was by capillary GC on an instrument equipped with FID and thermoionic specific detector (TSD) joined with a Y-connector to a Supelco SPB-5 capillary column, 30m x 0.25 mm ID x 1.0 μm df. Conditions appear in Table 1 below. The resulting LOD for the active sampling technique was 104 mg/m3 with GC-FID and 0.021 mg/m3 with GC-TSD. 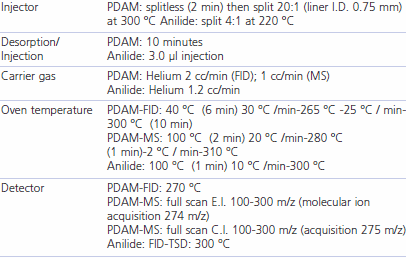 Results of the analysis of workplace acetic acid using the passive (SPME) and active (charcoal ORBO 32) methods are reported in Table 2. Using the Student’s T-test for paired samples, there appears to be no significant difference between the two methods (p<0.05). Acetic acid levels in the air breathed by the workers ranged from 1.5 to 4.1 mg/m3 (mean 2.8±1.05) by the SPME method and 1.1 to 4.2 mg/m3 (mean 2.7±0.98) with the charcoal method. Of importance to the workers, all acetic acid values were well below the TLV-TWA of 25 mg/m3 suggested by the ACGIH.

The SPME technique is also characterized by good analytical reproducibility and repeatability as tested with four different fiber lots (C.V. inter-day = 4.3%, C.V. intra-day = 3.8%). We found that over 200 analyses could be performed on the same fiber. Also, the PDAM and PDAM-ester derivative adsorbed on the fiber are stable for at least 7 days if stored at or below -20 °C. 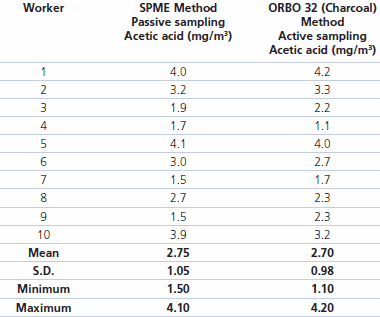