Concepts and Tools for RAFT Polymerization

From our Controlled Radical Polymerization Guide. Adapted from contributions by researchers at CSIRO.

Reversible addition/fragmentation chain transfer (RAFT) is a form of living radical polymerization. RAFT polymerization was discovered at CSIRO in 1998.1 It soon became the focus of intensive research, since the method allows synthetic tailoring of macromolecules with complex architectures including block, graft, comb, and star structures with controlled molecular weight.2

RAFT polymerization is applicable to a very wide range of vinyl monomers under a variety of experimental conditions, including the preparation of water-soluble materials.3 The RAFT process involves conventional free radical polymerization of a substituted monomer in the presence of a suitable chain transfer agent (RAFT agent or CTA).

Commonly used RAFT agents include thiocarbonylthio compounds such as dithioesters,1 dithiocarbamates,4,5 trithiocarbonates,6 and xanthates,7 which mediate the polymerization via a reversible chain-transfer process. Use of a proper RAFT agent allows synthesis of polymers with a high degree of functionality and narrow distribution of molecular weights also referred to as a low polydispersity index (PDI) as shown in Figure 1.

Figure 1.General comparison of polymers made with traditional radical polymerization against those made using RAFT process.

A RAFT CTA typically has a thiocarbonylthio group (S = C-S) with substituents R and Z that impact the polymerization reaction kinetics and therefore, the degree of structural control. Initiation of the polymerization reaction is accomplished utilizing conventional thermal, photochemical, or redox methods, and the success of the RAFT polymerization experiment is dependent upon selecting the appropriate RAFT reagent for a particular monomer and reaction medium. This general concept is depicted in Figure 2.

Figure 2.General structure of a RAFT agent, where the R and Z subtituents impact reaction kinetics. The choice of the RAFT agent is critical to obtain polymers with low PDI and controlled architecture.

The application of RAFT agents with common monomers used in polymerizations is shown in Table 1. The plus and minus symbols represent the degree of compatibility between monomer classes and a RAFT agent. For example, Prod No. 723037 (fifth item down in Table 1) is very useful in polymerizing styrenes, methacrylates and methacrylamides, shows moderate activity for acrylates and acrylamides but cannot polymerize vinyl esters or vinyl amides. This table can be used as a guide for selecting the most appropriate RAFT agent for your needs. 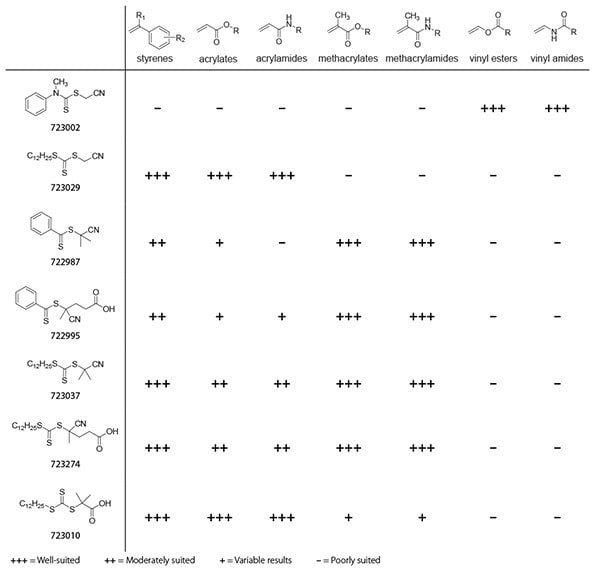