In most countries, the ownership and trade of products from the plant Cannabis sativa, like hashish or marijuana, is illegal, and driving under the influence of cannabinoids can result in prosecution. As a consequence, new cannabinoid-like compounds originating from pharmaceutical developments, e.g. for cancer therapy, were used as additives in hashish-like mixtures of herbs and other plants, to bypass these legal restrictions. A large number of these substances interact in the same way with the cannabinoid receptors as tetrahydrocannabinol (THC), but their effect is much stronger and the potential of becoming addicted is assumed to be comparable to THC. For a short while, these synthetic cannabinoids in herbal blends, e.g. “Spice”, were widely available, as there was no information about the identity of the ingredients in the blends. V. Auwärter and his group identified several compounds including one unknown CP 47,947 homologue, which lead to the prohibition of several cannabinomimetics and homologous compounds.1

We offer a large variety of cannabinoid receptor agonists as drug standards for analytical or pharmacological purposes. The new compounds are added to this list and further will follow. Furthermore, development of applications for the analysis of synthetic cannabinoids with LC/MS are in progress, and first results of an HPLC method using the Supelco Ascentis® Express RP-Amide column are presented in this article. The method used separate compounds in a methanolic extract of “Spice Diamond” and identifies the main active pharmacological ingredient with mass spectro metry. Finally, the issue of sample loss in glass vials after storage is discussed for THC, which typically shows this phenomenon in standard glass vials. Therefore, pre-treated silanized vials are presented as an alternative, to prevent this kind of sample degradation.

Ingredients of “Spice” and Other Potentially Misused Synthetic Cannabinoids

Below is a a list of synthetic and natural cannabinoids used for the method development. JWH-018 is one of the compounds found in “Spice." Interestingly, the JWH compounds have no structural relation to typical cannabinoids like THC.

Several separation methods for cannabinoids using different chromatographic techniques were developed in the past. Predominantly GC/MS methods with derivatization are used in most laboratories as they guarantee LOQs of 1 ng/mL. The introduction of LC/MS systems, especially the robust orthogonal sprayer geometry, opened new ways for a more efficient sample preparation without derivatization reactions2-3. Small particles; and the development of new key technologies like Fused-Core®, improved the resolution and sensitivity of HPLC significantly. Besides sensitivity, the selectivity of the surface chemistry also determines significantly the quality of the chromatography for a given set of analytes. For cannabinoids, superior results can be achieved with the Supelco Ascentis Express RP-Amide stationary phase. This combines both high resolution of the peaks and a selective stationary phase to separate very similar molecules, like cannabinol and Δ9-tetrahydrocannabinol, as well as very different molecules, like the more polar internal standard digoxine (IS) or the metabolite Δ9-tetrahydrocannabinolic acid.

Figure 1 shows the chromatograms of 6 different cannabinoid and cannabinomimetic standards detected in the positive and negative ESI mode. The compounds show different sensitivity depending on their ionization energy in the related ESI mode. But one can see that the right HPLC column provides baseline separation for compound 4 (cannabinol) and 5 (Δ9-tetrahydrocannabinol) and a very good symmetry of all peaks. After testing the suitability of the chromatographic system, a real “Spice”-Mixture (“Spice Diamond”) was extracted with methanol for 1 h. The sample was vortex-mixed and sonicated several times. 5 μL of the sample solution was injected into the HPLC system. The total ion chromatogram of the “Spice” extract in Figure 2 shows a large number of different compounds and a high noise signal from the matrix. But with the knowledge of the mass and the retention time, one can easily identify the compound JWH-018 (inset) in this very complex mixture. Even under these conditions, the peak shape and peak position remain absolutely comparable to the matrix-free standards solution. Figure 2.Total ion chromatogram (TIC) of the “Spice” extract in methanol. The inset shows the extracted ion chromatogram of mass 342.1 m/z compared to the EIC of the control sample. The observed mass by the ion trap is 342.12 m/z and the calculated mass of C24H23NO is 342.19 m/z, which identifies the compound as JWH-018 – a typical ingredient of “Spice”.

After the preparation of samples and storage of 1 or more days, one can frequently observe the loss of signal intensity depending on the compounds, concentrations, solvents or sample matrices. Cannabinoids, particularly, show this effect. This sample loss is shown in the decrease of calibration curve slopes in Figure 3 and is due to the irreversible adsorption of the analyte on the surfaces of the sample container. 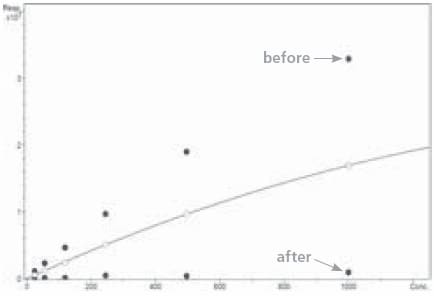 Figure 3.Calibration curves of THC before and after storage in non-silanized sample vials. The adsorption of the analyte leads to a significant decrease of the response compared to the original response.

In order to prevent sample loss and to guarantee a stable compound concentration, the use of pre-configured silanized vials or the silanization of the vials with suitable agents is recommended. In the case of the cannabinoid samples, Supelco silanized clear glass vials (27060-U) were used, and resulted in repeatable calibration curves even after two days in storage, at room temperature. Additionally, a better linearity up to a concentration of 1000 ng/mL was observed (Figure 4). 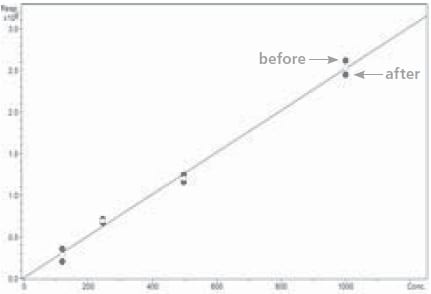 Figure 4.Calibration curves of THC before and after storage in silanized vials (Supelco)

Fused-Core is a registered trademark of Advanced Materials Technology, Inc.