HomeGas Chromatography (GC) The Use of Derivatization Reagents for GC

The Use of Derivatization Reagents for GC

Analyte range is somewhat limited when it comes to GC analysis when compared to other techniques, such as HPLC. A couple of the causes for this can be attributed to compounds having low or no volatility, or those having poor thermal stability. An approach to overcoming these issues is to modify the analyte into a more “GC-amenable” form, using the process of derivatization.

BSTFA + TMCS as a Derivatization Reagent for GC

Derivatization is a technique that usually involves a reaction of the analyte(s) of interest with a particular derivatization reagent. There are a multitude of reagents that can be used depending on the character and functionality of the analytes. One of the more commonly used in GC analyses involves a reaction that adds a trimethylsilyl (TMS) functional group to the compound. This is also known as trimethylsilylation. The reagent N,Obis( trimethylsilyl)trifluoroacetamide (also called BSTFA) is regularly used for this reaction.

The ease of derivatization of various functional groups for a given silylating reagent follows this order: alcohol > phenol > carboxylic acid > amine > amide. Within this sequence, reactivity towards a particular silylating reagent will also be influenced by steric hinderance. Therefore, the ease of reactivity for alcohols follows the order: primary > secondary > tertiary, and for amines: primary > secondary.

For moderately hindered or slowly reacting compounds, a catalyst may be added to the BSTFA. Some of the more common catalysts are trimethylchlorosilane (also called TMCS), trifluoroacetic acid, hydrogen chloride, potassium acetate, piperidine, O-methylhydroxylamine hydrochloride, and pyridine.

There are a few parameters that must be considered when performing a derivatization reaction. For instance, an alcohol may fully derivatize in just a matter of minutes at room temperature. However, it may take hours at an elevated temperature to complete the reaction for an amide or a sterically hindered carboxylic acid.

Along with time and temperature, the concentration of the reagent is important. It is recommended to add the silylating reagent in excess. As a general rule, add at least a 2:1 molar ratio of BSTFA to active hydrogens.

Most derivatization reactions are sensitive to water. The presence of water may slow or completely stop the reaction. Moisture may also decompose the TMS reagent or the derivatives that are formed. Therefore, it is recommended that derivatization reagents be stored in a secondary container that contains desiccant. Additionally, moisture should be removed from the extract that is to be derivatized.

Without derivatization, estrogenic compounds and lysergic acid amide (LSD) show little or no response by GC analysis. With the addition of the TMS group, these analytes show great peak shape and response. The following paragraphs detail the steps taken to ensure the derivatization reactions go to completion by manipulating the above mentioned procedure considerations.

Of the four estrogenic compounds, three were fully derivatized within 30 minutes at 75 °C. However, estriol appeared to only have two of its active hydrogens silylated in 30 minutes (according to spectral data obtained from GC-MS analysis). The extract was derivatized a second time at 75 °C. Additionally, the reaction time was increased to 45 minutes. After being allowed to sit overnight at room temperature, GC-MS analysis then confirmed that all three active hydrogens had been replaced with TMS groups. Figure 1 shows the final chromatogram. 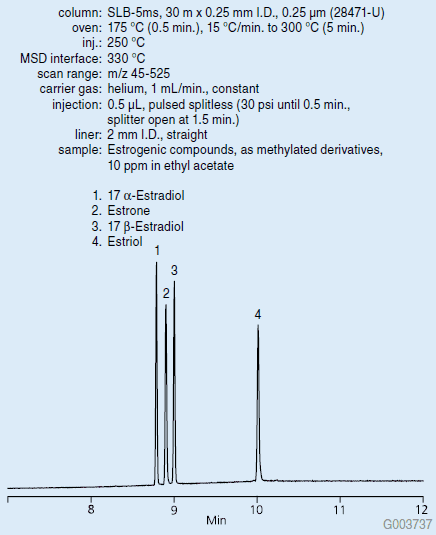 Lysergic acid amide (LSD), was derivatized under similar conditions as the estrogenic compounds but at 68 °C. This reaction was sampled at intervals of 30 minutes. At this temperature, this reaction never went beyond 60% completion, even after 5 hours. The temperature was then increased to 75 °C. The elevated temperature pushed the reaction to approximately 95% completion. Even after almost three hours, both the LSD and the LSD (TMS) peak are still detected by GC analysis, which means that the reaction has not gone to 100% completion. This chromatogram is shown in Figure 2. 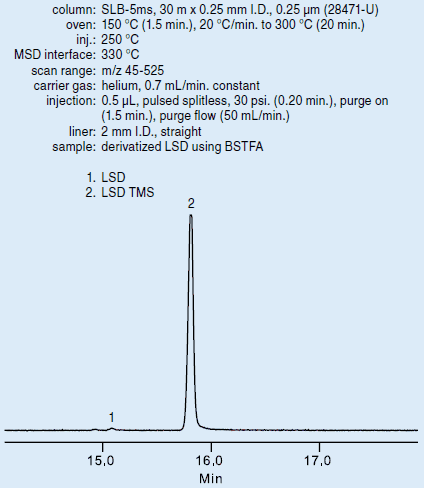 Derivatization reactions allow an expanded range of analytes that are capable of being analyzed by GC. However, there are a few parameters that may require some trial and error to optimize the reaction. In the examples shown, both temperature and time were crucial to having the reactions go to completion. These two examples illustrate that each derivatization reaction must be optimized to achieve a high derivatization completion percentage, resulting in good peak shape and detector response.