Hexachlorobenzene and chlorothalonil are pesticides with planar structures that are commonly used during the cultivation of spinach and other leafy, green crops. The presence of large pigment molecules, such as chlorophyll in green food matrices often hinders the extraction and analysis of these residues. In both GC/MS and LC/MS/MS analyses, chlorophyll is highly problematic. It accumulates in the inlet and degrades column performance in GC/MS, and it is also known to contaminate the LC/MS/MS source.

QuEChERS “Quick, Easy, Cheap, Effective, Rugged, and Safe” extraction and cleanup methods are commonly used to prepare food samples for pesticide residue determination. To remove chlorophyll interferences, the use of Graphitized Carbon Black (GCB) is recommended for the removal of chlorophyll and other pigment interferences. While traditional GCB efficiently removes pigment molecules, it also retains planar pesticides as a result of π-π interactions between the graphitic carbon and the planar structures of the pesticides. In order to mitigate this problem, QuEChERS tube manufacturers suggest either using a smaller amount of the GCB in the cleanup tube, or adding toluene to the acetonitrile extract to decrease binding of planar pesticides to the GCB.

This manuscript features the comparison of five QuEChERS products developed for the removal of chlorophyll from green samples. Chlorophyll removal, background, and analyte recovery of planar pesticides will be compared herein.

Organic spinach was macerated and extracted with acetonitrile. The procedure outlined in Figure 1 fully describes the extraction and cleanup procedure for use with the 2 mL Supel™ QuE Verde and Supel QuE PSA/ENVI-Carb™ tubes. QuEChERS extraction and cleanup was performed in a similar fashion to that outlined in the AOAC International Official Method 2007.01; however, the Supel QuE Verde 2 mL and 15 mL tubes can also be substituted into the cleanup portion of Official Method EN15663:2008.1,2 For the evaluation of products of other brands, the procedure outlined by each respective manufacturer was used. The acetonitrile extract was spiked with a mixture composed predominantly of planar pesticides in acetonitrile to a concentration of 50 ng/mL. Samples were spiked after extraction to study the performance of the cleanup sorbents only in relation to the pesticides in question. Extractions were performed in triplicate. Analysis of the final extracts was done by GC/MS using the GC conditions listed in Figure 2. 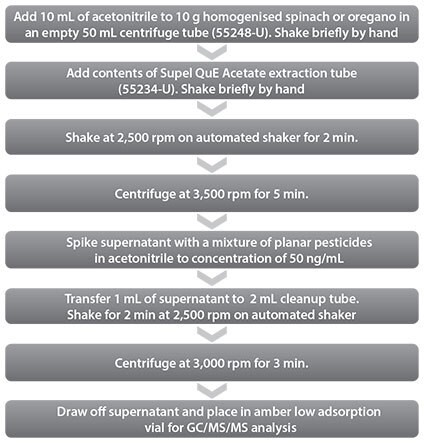 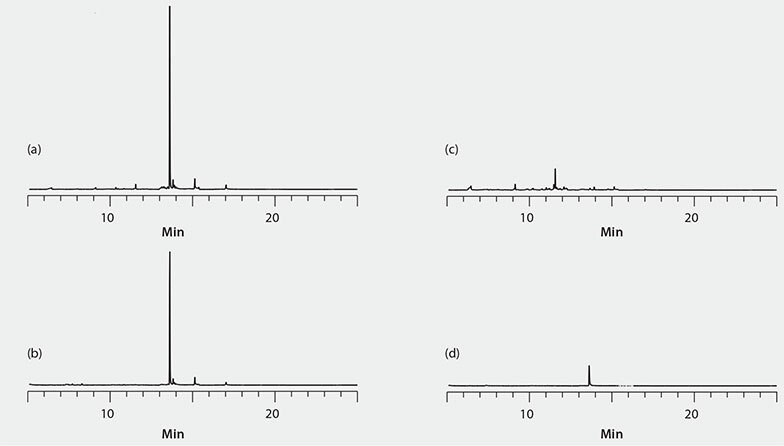 Chromatograms of the unspiked acetonitrile extract by GC/MS in full scan mode are shown in Figure 2. The background was significantly lower using Supel QuE Verde.

Figure 3 shows the spinach extracts after cleanup with the various 2 mL QuEChERS tubes. Removal of the majority of the green pigment is observed using the Supel QuE Verde tubes. Total chlorophyll removal was evaluated using a spectrophotometer by measuring absorbance at 664 nm, 647 nm, and 630 nm, and comparing the processed extracts to the initial acetonitrile extract of each plant material (Figure 4). Cholorophyll removal was 95% or greater for Supel QuE Verde, Supel QuE PSA/ENVI-Carb, and Brand W. Brand A and Brand R showed less than 95% chlorophyll removal.

Average analyte recoveries obtained from 50 ng/mL spiked spinach extracts using 2 mL QuEChERS cleanup tubes are summarized in Figure 5. For the Supel QuE Verde tubes, recoveries were in the range of 75% to 120% for all of the planar pesticides tested. For the other tubes, the recoveries of many residues fell well below 70%. Reproducibility, determined as % RSD for n=3 spiked replicates, was very good for all tubes evaluated. Each pesticide exhibited a %RSD value less than 20% with the exception folpet for brand A and brand R. 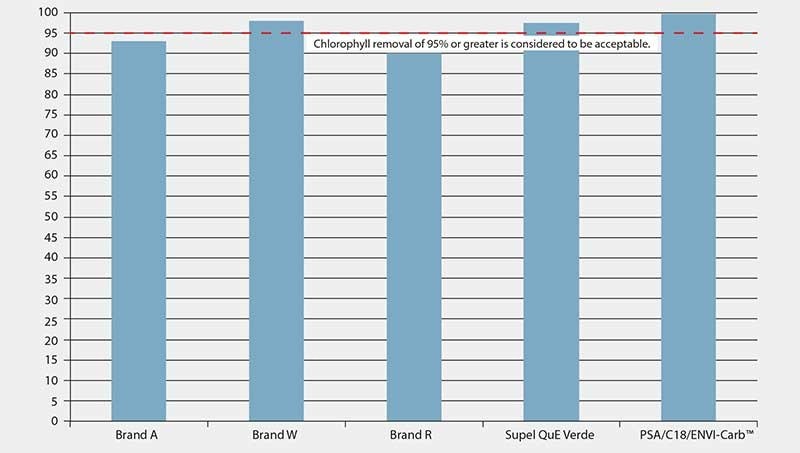 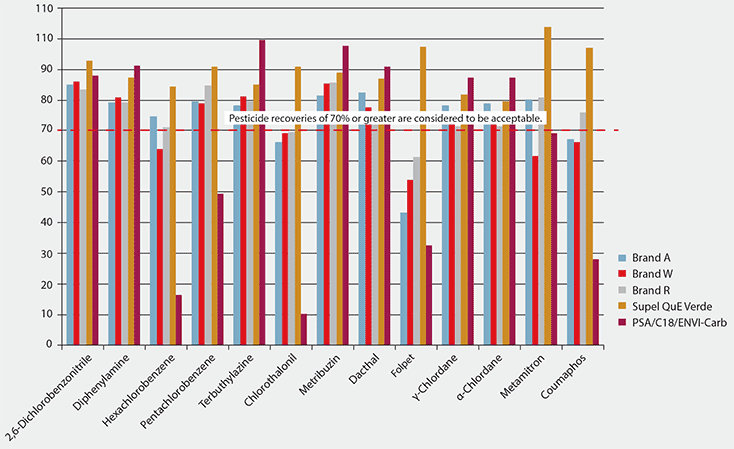 In general, food chemists analyzing compounds in green matrices view pesticide recovery between 70% and 120%, and chlorophyll removal 95% or greater to be acceptable. Because of the strong interaction between planar pesticides and the planar surfaces of GCB, there remains a compromise between color removal and analyte recovery, especially regarding the most planar pesticides such as hexachlorobenzene and chlorothalonil. Most manufacturers of QuEChERS products try to achieve this balance by decreasing the amount of GCB in the cleanup tube. Supel™ QuE Verde combines a novel carbon with zirconia coated silica (Z-Sep+) to provide an optimum balance between planar pesticide recovery and color removal. This application illustrates that Supel QuE Verde achieves a better balance between chlorophyll removal and recovery of planar pesticides than other brands of QuEChERS tubes designed for chlorophyll removal.