A simplified LC-MS/MS method for the determination of glyphosate, (aminomethyl)phosphonic acid (AMPA), and glufosinate in cereals is described. The method enables the analysis of glyphosate and its metabolites without sample derivatization. The samples are prepared utilizing an extraction method based upon the Quick Polar Pesticides (QuPPe) Method and separated by high-performance liquid chromatography with MS detection. A carbon-based chromatography column allowed retention of the analytes while a basic ammonium carbonate buffer and acetonitrile:water mobile phase system ensured proper ionization under negative ESI conditions. The use of a sensitive Sciex 6500 MS instrument enabled low detection limits of 10 ppb in oat-based samples. In multiple analyzed cereals levels of glyphosate, AMPA and glufosinate were found to be above the detection limits of the method.

Glyphosate is one of the most used herbicides in the world with more than 0.64 million tons of glyphosate applied to fields per year.1 This chemical’s usage increased after the introduction of genetically modified, glyphosate tolerant crops such as corn, soybeans, and cotton. In the USA, US Environmental Protection Agency (EPA) regulation document Code of Federal Regulations (CFR)-title 40-volume 26 sets the tolerance levels for the occurrence of glyphosate in food commodities and produce.2 The EPA tolerance for glyphosate residues in cereal grains (also called crop group 15) are set at 30 ppm; this limit excludes rice, soy, and corn. In rice, the tolerance is 0.1 ppm whereas, in sweet corn it is 3.5 ppm.2 For glufosinate, an herbicide that is often included with glyphosate in analytical methods, the tolerance values are 0.4 ppm for cereal and 1.0 ppm for rice. These tolerance values include metabolites and degradants. Therefore, a glyphosate metabolite, AMPA, was also included into this study (Figure 1). For comparison, in the European Union (EU), maximum residue levels (MRL) in oats are 20 mg/kg for glyphosate and 0.03 mg/kg for glufosinate (lower limit of analytical detection). For rice, the MRLs for glyphosate and glufosinate are 0.1 mg/kg (lower limit of analytical detection) and 0.9 mg/kg, respectively.3 In this application, the presence of glyphosate in cereal grains, and oat, in particular, used in the production of breakfast cereals, was explored. Various methods for glyphosate analysis were developed over the last 30 years. Some HPLC methods required derivatization of analytes with o-phthalaldehyde prior to fluorescence detection.4 A method with glyphosate derivatization using fluorenylmethyloxycarbonyl chloride (FMOC) and fluorescence detection has also been proposed and widely used.5 Recently, with the advent of modern, sensitive, and rugged LC-MS/MS instruments, it has become possible to analyze glyphosate and its metabolites without derivatization, as illustrated in this work with direct analysis of glyphosate by MS/MS. Multiple columns were previously used for mass spectrometry-based glyphosate analysis including ion-exchange, hydrophilic interaction liquid chromatography (HILIC), or carbon HPLC columns.6 Some of the HILIC-based and ion-exchange methods used ESI(+) for detection of glyphosate and analogues in acidic mobile phases.6,7 The HILIC-based methods present a challenge of solvating these very polar analytes in the non-polar diluent. Ion-exchange methods utilized negative ionization mode for detection and citric acid or citric salts in the mobile phase.5 These additives are not volatile and therefore not fully compatible with mass spectrometric detection. We have shown previously that detection of glyphosate in ESI(-) was possible using carbonate buffer and an anion exchange column.8 In this work, we used a volatile bicarbonate buffer mobile phase and a Supel™ Carbon LC column. This column possesses a unique mixed- mode retention mechanism that allows better retention of polar analytes without the need for HILIC conditions.

Organic oatmeal was selected as the test matrix and used during method development. Multiple samples of organic oatmeal from local stores were screened for the presence of glyphosate using the method described below (Figure 2). All oatmeals had some level of glyphosate and other compounds present. For the method development study, a cereal sample was selected that had the lowest overall background for all three analytes, containing only glyphosate at 24 ppb. This specific matrix was spiked to contain 80 ppb and 800 ppb of all 3 analytes. The spiked samples were used to evaluate the recovery of analytes during method development and for validation.

Additionally, multiple samples of oat cereals were purchased in the local grocery store and evaluated for glyphosate contamination using the developed method.

Solid phase extraction (SPE) cleanup using Supel™ Swift HLB cartridges was applied to the extract, similarly to a method reported by Chamkasem and Harmon.9 Hydrophilic-lipophilic balance (HLB) SPE can be applied to a broad range of analytes using reversed phase methodology. The SPE cleanup method used is based on chemical "filtration" (interference removal). In this approach, the sample extract is simply passed though the HLB cartridge and the eluate collected for analysis. The HLB will retain impurities that are more hydrophobic in character than the target compounds, while the polar analytes will pass through.

The analysis was completed using a Supel™ Carbon LC column, which provided good retention for these polar analytes. The aqueous mobile phase [A] used was an ammonium carbonate buffer, pH 9. This ensured proper ionization of the phosphate or phosphonate moiety in the analytes (Figure 1) monitored under ESI(-) conditions. In addition, ammonium carbonate buffer is volatile and is fully compatible with LC/MS instrumentation. The organic mobile phase [B] contained acetonitrile:water (95:5). The method operated under both a mobile phase and a flow rate gradient. Table 1 lists the MS analyte parameters. Figure 3 presents a chromatogram of a standard injection and the LC instrument parameters.

Solvent-based external calibration curves used internal standards and were prepared in 75:25 water:methanol with 0.25% (v/v) formic acid. The concentration range of calibration curves was from 3 ng/mL to 200 ng/mL and the linearity was better than R2 of 0.99 for each compound. A representative calibration curve for glyphosate is shown in Figure 4. Sample preparation used fast solvent extraction. SPE was the first choice for sample cleanup as the sample can be simply passed through the cartridge. As all analytes in this method are polar, they were not retained on the Supel™ Swift HLB material and were expected to achieve good recoveries.

The chosen chromatographic method allowed the injection of the prepared extract after a simple dilution step. Elution off the HPLC column was performed isocratically using aqueous carbonate buffer as the mobile phase. A column wash step followed using acetonitrile. Multiple injections (n>100) of extracted samples did not result in significant retention time change. For example, the retention time variability across 5 days of injections and two different mobile phase preparations had an RSD of 3.2%, indicating the ruggedness of this LC method.

Organic oatmeal samples were screened for glyphosate and related compounds. These results are shown in Table 2. All compounds were found to be present in all samples indicating the good sensitivity of the proposed method. The sample with the lowest overall concentration for incurred analytes, Sample N, was chosen to be used for method validation.

Six replicates of Sample N were spiked with 24 ppb to determine the method’s limit of quantitation (LOQ) for all three analytes. The recoveries were found to be within 80-120% with an RSD of below 15%. LOQ was calculated using a signal-to-noise ratio of 10:1. It was as follows for each analyte:

Sample N was spiked with the three analytes at both 80 ppb and 800 ppb levels. Glyphosate and AMPA chromatograms for the 800 ppb spiked sample are shown in Figure 5. The quantitation results are shown in Table 3. All three analytes were detected and quantified at both spiking levels. Accuracy of the method was measured as the percent recovery of the known spiked amounts. For 80 ppb and 800 ppb spikes, the recovery values for glyphosate were 124% and 96%, for glufosinate, they were 132% and 104%, and for AMPA the recoveries were at 80% and 88% respectively on day one. Similar recoveries were achieved on the second day of testing when the samples were extracted and analyzed again. Reproducibility of the method was excellent with below 10% RSD for 800 ppb spiked samples and below 20% RSD for 80 ppb spiked samples. 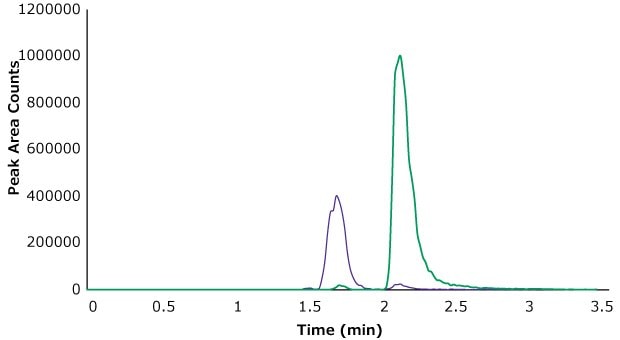 Identification and quantitation of glyphosate in cereals

The results of glyphosate analysis in cereals using the proposed method are presented in Table 4. These samples were purchased in the grocery store, sample N was labelled “organic”. Internal standards were used as described in the experimental section. The samples were found to contain 25-260 ppb of glyphosate. AMPA levels in oat-containing samples varied from non- detected to 40 ppb. Glufosinate levels were found to be below LOQ.

The developed method for glyphosate and related compounds uses LC-MS/MS with a Supel™ Carbon LC column that is stable under basic pH conditions. This column provided sufficient retention for the polar analytes in the presence of methanol as extraction solvent. The mobile phase used 20 mM ammonium carbonate buffer, fully compatible with mass spectrometry, and allows for efficient ionization. For the oat cereal samples, the extraction was based on the QuPPe method using a mixture of methanol and water followed by a cleanup using the Supel™ Swift HLB SPE. The use of stable isotope labelled internal standards resulted in good accuracy for glyphosate and related compounds. Further, it allowed the use of solventbased calibration curves. The limit of quantitation (LOQ) for glyphosate for this method using triple-quad MS detection was determined at 6 ppb. The analyzed samples of oat-containing cereals were found to contain 25-260 ppb of glyphosate.