Aflatoxins are produced by fungi of the Aspergillus genus. Of several aflatoxin producing species, two are widely studied due to their importance to agriculture and medicine: Aspergillus flavus and Aspergillus parasiticus1. These species infect important cereal grains, including maize, as well as ground (peanuts) and tree nuts. When infected, such commodities may become contaminated with aflatoxins and may subsequently be introduced into products routinely used in human and animal nutrition2,3. When ingested, these toxins have the potential to impact animal, and especially, human health4,5. They have been classified by the International Agency for Research on Cancer (IARC) as group 1 carcinogens, that is, compounds known to be carcinogenic in humans6. Their target organ is the liver where they are thought to interfere with regulatory elements of DNA function7. The most biologically active aflatoxin is aflatoxin B1 (AFB1)4. A recent risk assessment determined that aflatoxins may be implicated in 4.6-28.2% of hepatocellular carcinomas (HCC) worldwide8.

The focus of this study is the metabolite of AFB1, aflatoxin M1 (AFM1). AFM1 can be present in the milk of lactating dairy animals that have consumed aflatoxin contaminated feeds3. Although this aflatoxin is less biologically active than its precursor, it is also listed by the IARC as a group 1 human carcinogen6. According to one understanding of aflatoxin toxicity “... it is generally felt that there is no threshold dose below which no tumor formation would occur... only a zero level of exposure will result in no risk...”9 Because of its potential as a carcinogen, and because milk is widely used as a food source, particularly for children and infants, the concentration of AFM1 in milk is widely regulated10.

The European Union (EU), along with Israel, has imposed the most stringent limits for the presence of AFM1 in raw milk and milk used for the manufacture of milk-based products. Currently, EU and Israeli permissible level of AFM1 in milk-based products is 0.050 µg/kg, while the regulatory specification for AFM1 levels in infant formula, follow-on milk and other specified infant products, is 0.025 µg/kg11,12.

Feasibility for this LC/MS analysis was initially investigated using protein precipitation with milk samples and FLD detection. Samples that were spiked at 0.5 ng/mL (0.5 µg/kg) and analyzed by HPLC, demonstrated that cleanup was sufficient to permit detection of AFM1 with a recovery of 88%. This study further develops the AFM1 sample cleanup and analysis method to detect and quantify aflatoxin M1 at concentrations corresponding to the lowest EU regulatory limit. A successful method will encompass regulatory limits for AFM1 in milk as determined by the U.S. and China13,14.

Locally obtained 2% milk (45 grams) was weighed into 50 mL polypropylene centrifuge tubes* and centrifuged for 60 minutes at 5000 revolutions per minute (rpm), with a relative centrifugal force (RCF) of 4863 x g.** Following centrifugation, milk was chilled at 0 °C for 30 minutes. After cooling, the top (fat) layer was removed using a laboratory spatula, and then 20 mL of serum milk (middle layer) was transferred to a collection flask.

A 0.5 µg/mL AFM1 reference standard was diluted to 0.05 µg/mL by transferring 150 µL of the standard into 1350 µL of acetonitrile. Prepared milk (80 mL) was transferred into each of two 200 mL silane treated Erlenmeyer flasks.* Either 40 or 400 µL of the 50 ng/mL aflatoxin spiking solution was added to 80 mL of milk, resulting in 25 and 250 pg/mL concentrations of AFM1 in the respective spikes. The milk was spiked and gently swirled for two minutes prior to extraction.

Acetonitrile (20 mL) was pipetted into clean 50 mL polypropylene centrifuge tubes. AFM1 spiked milk (20 mL) was added to each tube in four 5 mL aliquots, inducing protein precipitation. The mixture was shaken for 5 seconds by hand. A Supel™ QuE non-buffered tube 2 (Product No. 55295-U) was added to the liquid and the suspension was immediately shaken vigorously to disperse the salts. The centrifuge tubes were then placed on a laboratory shaker for 5 minutes. After shaking, the tubes were centrifuged at 5000 rpm (RCF 4863 x g) for 20 minutes. AFM1 was extracted into the organic (top) layer of the preparation (Figure 1a). 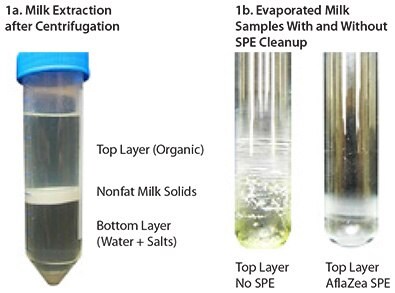 Figure 1a.Milk extraction after centrifugation; 1b. Evaporated milk with and without SPE cleanup.

Supel Tox AflaZea SPE cartridges (Product No. 55314-U) were mounted on a vacuum manifold fitted with a rack containing 16 x 125 mm silane-treated glass culture cartridges. The vacuum was set to -5” Hg and 10.0 mL of sample from the top layer of each extract was loaded onto a corresponding SPE cartridge. Immediately after the cartridges were drained, 100% acetonitrile (2 x 2 mL aliquots ) was passed through the cartridges to wash any remaining sample into the collection cartridges.

Collected samples were evaporated at 70 °C under a 10 psi nitrogen stream. The nitrogen stream was initiated at 3 psi, increased to 6 psi, and finally increased to 9 psi at 5 minute intervals. Samples were reconstituted by pipetting 500 µL of 20:80 acetonitrile:water onto the dried residue, followed by vortex mixing for 30 seconds. The dissolved residue was then transferred by Pasteur pipette into 1 mL syringes, tipped with 13 mm, 0.2 µm polyvinylidine fluoride (PVDF) filters, and pushed into 750 µL polypropylene vials. Quantitation was performed using matrix matched calibration standards ranging from extracted concentrations of 12.5 pg/mL to 500 pg/mL (absolute concentrations of 250 pg/mL to 10,000 pg/mL).

Milk was initially centrifuged to remove fats and nonfat milk solids (NFMS). For n=16, an average 2.6% of fats and 0.7% of NFMS by weight of milk was removed.

The SPE portion of the sample cleanup was simple and fast (less than 1 min/sample, n=3.) During the SPE cleanup, the unwanted interferences from the milk remained bound to the cartridge while the analytes of interest were eluted. Compared to other SPE methods in which the analytes of interest bind to the cartridge and are subsequently eluted after various wash steps, this “interference removal” strategy required fewer steps and resulted in a sample preparation time savings. The evaporation time that elapsed was approximately 30 minutes. As seen in Figure 1b, the AflaZea purified sample appeared visually cleaner in terms of remaining residues and sample tint than the raw sample. The chromatograms in Figure 2 indicate that the AFM1 peak was highly discernable from the background with no matrix interferences at either of the concentrations. Also, Table 1 illustrates that AFM1 was detected and quantified in both 25 pg and 250 pg concentrations with acceptable recoveries (102 % and 76%, respectively) and good reproducibility (10.2% RSD and 8.6% RSD, respectively). Thus, this SPE method demonstrated sufficient sample cleanup for the identification and quantification of AFM1 in milk at both concentrations

Figure 2.LC/MS Analysis of AFM1 in Milk after SPE Cleanup

A fast method for the cleanup, analysis, and quantification of aflatoxin M1 in milk samples to EU regulatory standards (0.025 µg/kg) has been developed using Supel Tox AflaZea SPE and LC/MS analysis. Unlike the multiple step “bind and elute” strategy implemented by other SPE methods, the Supel Tox AflaZea employed “interference removal,” producing time savings via elimination of wash steps. This SPE method served to remove problematic matrix interferences associated with milk in a timely fashion, while also attaining high analyte recoveries and good reproducibility. Early feasibility studies also suggest that this sample preparation method may be transferred to an HPLC, FLD method if working with AFM1 samples at higher concentrations.

*Because AFM1 can bind to untreated glass surfaces, polypropylene or silane-treated glass was used to centrifuge or collect samples.

**Centrifugation parameters are reported as rpm and relative centrifugal force (RCF). Force applied is a function of the radius of the rotor and rpm, and will vary depending with equipment used.