Peripheral blood mononuclear cells (PBMCs) are blood cells with round nuclei, such as monocytes and lymphocytes, with the lymphocyte population comprised of T cells, B cells, and natural killer (NK) cells. PBMCs are a critical component of the immune system, playing an integral role in the body’s defense mechanisms. Cellular assays using PBMCs form the backbone of immune monitoring studies in clinical diagnostics and therapeutic design. Given that ineffective separation of lymphocytes from whole blood can significantly alter cellular responses and lead to unreliable results, it is essential to start every assay with a rapid, simple, and reliable method for PBMC isolation and subsequent quantitation.

Separation of PBMCs from whole blood is most commonly achieved via Ficoll® density gradient centrifugation.1-3 Differential migration during centrifugation results in the separation of cell types intodifferent layers (Figure 1). The bottom layer contains Ficoll-aggregated red blood cells.Immediately above this is a diffuse layer containing mostly granulocytes and unbound Ficoll®. Due to a slightly lower density, the lymphocytes (including the monocytic PBMC fraction) sediment at the interface between the Ficoll® and uppermost plasma/platelet layer. PBMCs are removed from the interface and subjected to multiple washes in PBS or cell medium to remove any residual Ficoll. Cell isolates are then ready for analysis or culture seeding. 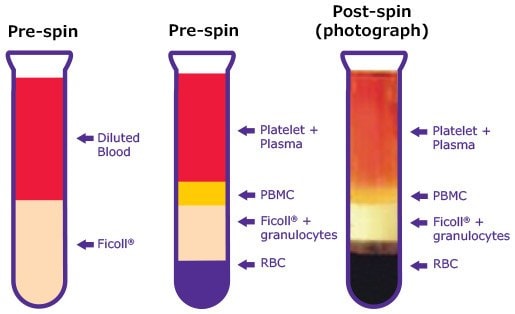 The Scepter™ cell counter combines the ease of an automated instrument and the accuracy of impedancebased particle detection using the Coulter principle in a handheld format. The instrument uses a combination of analog and digital hardware for sensing, signal processing, data storage, and graphical display. The precision-machined, consumable polymer sensor has a laser-drilled aperture in its cell sensing zone that enables the instrument to use the Coulter principle to discriminate cell diameter and volume at sub-micron and sub-picoliter resolution, respectively. Previous work has shown that, by using the 40 μm aperture sensor, the Scepter™ cell counter was able to accurately and precisely count a much broader range of cell types, including small cells (< 6 μm in diameter) such as PBMC and red blood cells (RBC).4 This short report outlines a protocol for the isolation of PBMC from whole blood and subsequent sample analysis using the Scepter™ cell counter.

This protocol is used to fractionate 10 mL of defibrinated or anticoagulant-treated peripheral blood* (or buffy coat) using 15 mL Ficoll® separation medium in a 50 mL conical tube. A 15 mL tube can be used for fractionating smaller volumes of blood; however, for high PBMC yield with efficient RBC removal, it is important to maintain the same volumetric ratio of sample to Ficoll. Further, to ensure high viability of isolated cells, we recommend using only freshly isolated blood samples (< 24 hours post-collection).

The Scepter™ cell counter was used to count samples following the detailed on-screen instructions for each step of the counting process. Briefly, the user attaches a 40 μm sensor, depresses the plunger, submerges the sensor into the sample, then releases the plunger to draw 75 μL of cell suspension into the sensor. The Scepter™ cell counter detects each cell passing through the sensor’s aperture, calculates cell concentration, and displays a size-based histogram as a function of cell diameter or volume on its screen. Scepter™ Software Pro was then used to upload files from the device and perform subsequent data analysis to determine the concentrations and relative cell frequencies for the lymphocyte and monocyte fractions.

Each 10 μL PBMC sample was diluted in 190 μL of PBS. Samples were then analyzed on a Guava easyCyte™ HT flow cytometer to determine the concentrations and relative cell frequencies for the lymphocyte and monocyte fractions.

Aliquots of each sample were stained with fluorescent antibody markers for characteristic PBMC phenotypes. The lymphocyte subset could be further subdivided into T cells (CD3+), B cells (CD19+), and NK cells (CD16/56+). Monocytes could be distinguished from total lymphocytes on the basis of differential CD14 expression. Samples were diluted and fractions analyzed using the flow cytometer and Scepter™ cell counter to determine total PBMC concentration. 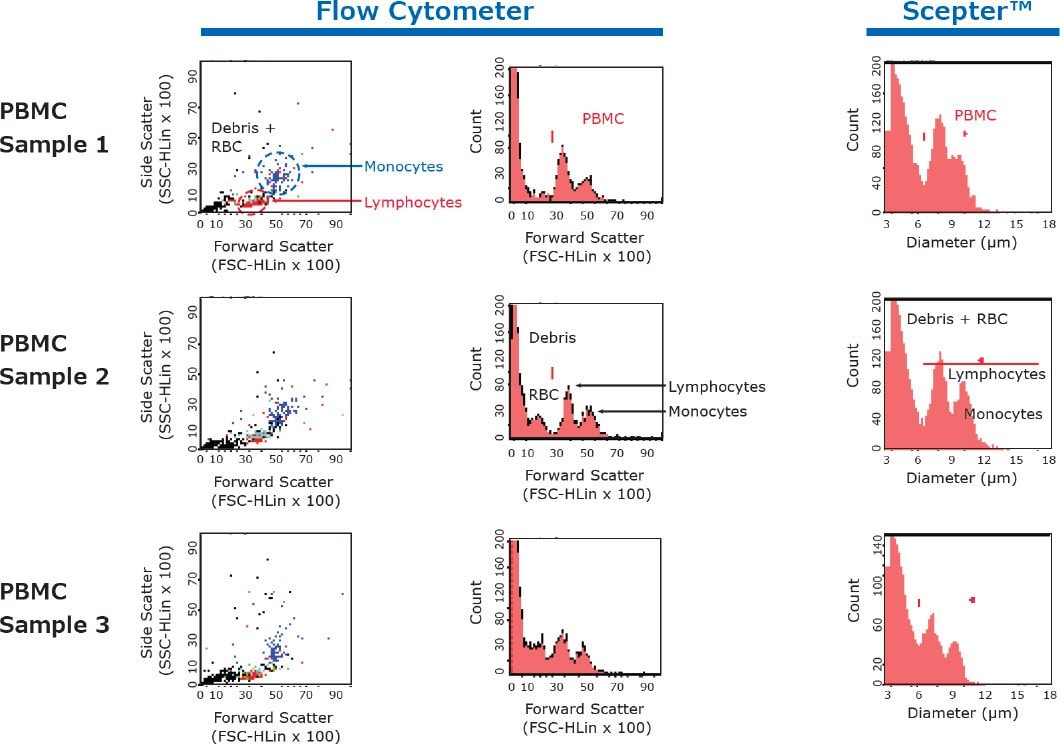 From the color dot plots in Figure 2, we discerned three event populations found within each sample: debris and red blood cells (Black), a lymphocyte subset (composed of T cells (Red), B cells (Aqua), NK cells (Green)), and a monocyte subset (Blue). While these subsets showed some overlap, each could be clearly defined by the size-based forward-scatter and diameter histogram plots of the flow cytometry and Scepter™ platforms, respectively. We observed somewhat greater peak distinction in the flow cytometry data than data from Scepter™ counting. Specifically, debris and contaminating erythrocytes each constituted a distinct subpopulation in flow cytometry derived histograms, but Scepter™ histograms showed only one peak corresponding to both fractions. Nine PBMC samples were analyzed (Table 1).

Across the nine samples, the average mean cell diameters were 7.23±0.30 µm and 10.02±0.20 µm for lymphocytes and monocytes, respectively. Resulting values are consistent with previously reported size ranges.5 In addition, total PBMC concentrations were determined by three methods: Scepter™ diameter plot, ﬂow cytometric forward scatter, and antibody staining (Figure 3). Overall, there was good agreement between the different analytical techniques with values varying by <15% in all cases. Small differences in results may be due to subjectivity and user bias in the placement of gates defining the PBMC fraction. 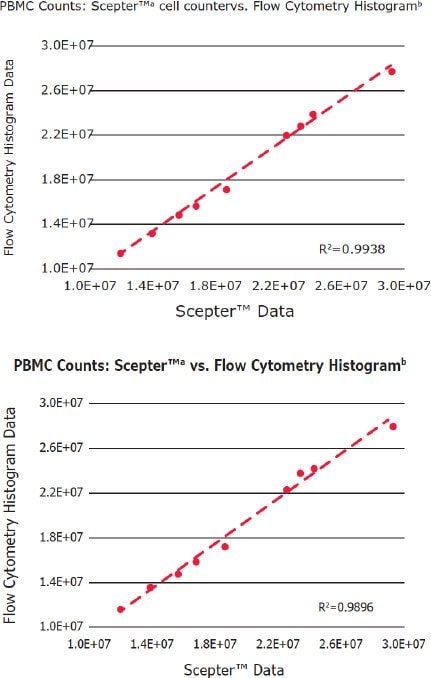 PBMCs are widely used in both research and clinical laboratories. Separation of PBMCs from blood by centrifugation constitutes a critical first step for all downstream analyses. We have outlined the basic steps required for density-separation media based purification of mononuclear cells from whole blood and further shown that the Scepter™ cell counter can be used for accurate determination of resulting PBMC counts.