Antibiotics are molecules that specifically target and kill cells. The term antibiotic is frequently used interchangeably with the word antibacterial, but antiviral, antifungal and antineoplastic compounds are also classified as antibiotics. Antibacterial action generally falls within one of three mechanisms, which involve the inhibition or regulation of enzymes involved in cell wall biosynthesis, nucleic acid metabolism and repair, or protein synthesis, respectively. Many of these cellular functions targeted by antibiotics are most active in multiplying cells. Since there is often overlap in these functions between prokaryotic bacterial cells and eukaryotic mammalian cells, it is not surprising that some antibiotics have also been found to be useful as anticancer agents.

Structurally, bacteria resemble primitive plants in that the cellular contents are surrounded by an inner peptidoglycan cell wall in addition to an inner plasma membrane and, in Gram-negative bacteria, an outer lipid bilayer. Specific antibacterials interfere with the synthesis of the cell wall, weakening the peptidoglycan scaffold within the bacterial wall so that the structural integrity eventually fails. Since mammalian cells have a plasma membrane but lack the peptidoglycan wall structure, this class of antibacterials selectively targets the bacteria with no significant negative effect on the cells of the mammalian host.

Peptidoglycan construction begins in the cytoplasm with the synthesis of a muramyl peptapeptide precursor containing a terminal D-Ala-D-Ala. Some antibiotics interfere with the synthesis of the basic peptidoglycan building block. For example, D-cycloserine inhibits two enzymes involved in the precursor synthesis, preventing both conversion of L-alanine to D-alanine by racemase, and the construction of D-alanyl-D-alanine by D-Ala-D-Ala ligase. In the cytoplasm, muramyl pentapeptide is anchored via a water-soluble UDP-glucosamine moiety.

In the second phase of peptidoglycan construction, muramyl pentapeptide N-acetylglucosamine is transferred to a C55 undecaprenyl phosphate with the release of UMP to form a Lipid I intermediate. Tunicamycin inhibits the enzymatic conversion of the undecaprenyl phosphate to the lipid I intermediate, stopping the completion of the peptidoglycan structure. An additional glycosylation step completes the peptidoglycan unit, following which it is transported via its C55 lipid tail to the external periplasmic surface of the membrane where its peptidyglycan unit becomes integrated into the cell wall matrix. Bacitracin inhibits lipid phosphatase, preventing the release of the finished peptidoglycan from its C55 lipid carrier.

Several transpeptidases and transglycosylases connect the newly formed peptidoglycan structures to the cell wall peptidoglycan matrix. The specificity of β-lactam antibacterials is due to their ability to inhibit transpeptidase enzymes and prevent the assembly of the peptidoglycan layer in both Gram-positive and Gram-negative bacteria. β-Lactam molecules, with their structural similarity to the D-alanyl-D-alanine group within the peptidoglycan structure, compete for the binding sites of transpeptidases. When it was first commercialized, penicillin, a β-lactam antibiotic, was considered a “magic bullet” because of its specificity for bacterial infections without harming the patient.

Vancomycin, a glycopeptide antibiotic with a significantly larger structure, also prevents cell wall construction by interfering with transglycosylases. Its effectiveness is limited to Gram-positive bacteria because it is unable to penetrate the outer cytoplasmic membrane of Gram-negative bacteria due to its large size as compared to penicillin. 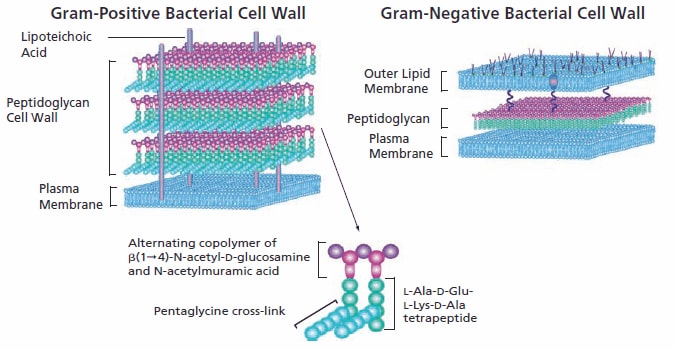