Several phosphate backbone variants have been developed in an attempt to alter the chemical properties of native-state DNA and therefore overcome the two major challenges involved with using oligonucleotides in vivo, including: 1) delivery to the interior of the cell through the plasma membrane, a lipid bilayer that without transport proteins, is mostly impermeable to polar molecules, and 2) extension of the effective molecular lifetime by minimizing extra and intracellular nuclease degradation.

One of the original and still most widely-used backbone variants is phosphorothioate (commonly referred to as S-oligo when incorporated into an oligonucleotide, Figure 1). Phosphorothioate has been found to help alleviate the second major challenge associated with using oligonucleotides in vivo by reducing the activity of a variety of extra and intracellular nucleases1. 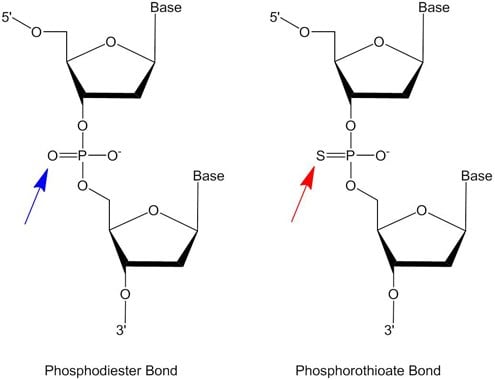 Figure 1. Phosphodiester and phosphorothioate internucleotide linkages. The sugar moieties in native-state DNA oligonucleotides are linked via phosphate (includes a non-bridging oxygen, highlighted by the blue arrow) whereas the sugar moieties in oligonucleotides modified with sulfurizing reagent are linked by phosphorothioate (includes a non-bridging sulfur, highlighted by the red arrow).

These features make phosphorothioate effective in creating oligonucleotides for antisense knockdowns, one of the early and still-pursued nucleic acid therapeutic technologies2. Phosphorothioate oligonucleotides downregulate gene expression by hybridizing to a target mRNA, which in turn either inhibits mRNA maturation, enables RNase H-mediated degradation of the transcript, or blocks translation3.

In addition to in vivo technologies, such as antisense, phosphorothioate is now often used with in vitro technologies for similar reasons, i.e. to prevent nucleolytic degradation. As an example, next-generation sequencing adapter oligonucleotides are often modified at one 3'-terminal internucleotide linkage to prevent degradation by enzymes used during library preparation4.

While phosphorothioate internucleotide linkages are resistant to nucleases, introduction of too many such bonds reduces the function of the oligonucleotide, especially for antisense. This is because the sulfurization process used during synthesis creates stereogenic α-phosphorus atoms (Figure 2), which results in diastereomers (2n-1 configurations for an oligonucleotide of length n). These types of stereoisomers have different functional properties, some of which negatively affect antisense. However, the potential negative effect of the diastereomers can be minimized by proper incorporation of the modification.

Figure 2. Stereogenic α-phosphorus at one internucleotide linkage. The random R and S configuration results in diastereomers.

The minimum number of incorporations—typically determined experimentally—should be used to prevent the negative effects that come with a diastereomeric mixture, including: 1) interference with the oligonucleotide:target hybridization thermodynamics brought on by a lower melting temperature (Tm)—results from the steric hindrance of certain configurations, which increases molecular rigidity, and 2) off-target binding—excessive phosphorothioate linkages can make oligonucleotides ‘sticky’—may lead to spurious antisense effects and therefore increase the likelihood of cellular toxicity.

Figure 3. Example abbreviated sequence formats of phosphodiester and phosphorothioate oligonucleotides with the same sequence. The phosphorothioate internucleotide linkages are notated by asterisks. As can be seen, the sequence has a minimal number of incorporations and is designed to protect against a hypothetical exonuclease.

Phosphorothioate is effective at reducing nucleolytic degradation of oligonucleotides needed for both in vivo and in vitro technologies. Several synthesis scales and purifications are available to meet a variety of research and applied needs. If additional help is needed, please consult our technical services group at oligotechserv@sial.com.