Peak resolution is a requirement for sensitive, accurate chromatographic analysis. Scientific meetings and publications have been dominated recently by reports on HPLC columns with Fused-Core™ particles and porous particles in the sub-2 μm range, which can both significantly enhance resolution and speed by producing either higher efficiency (N) for the same column length or equivalent effi ciency with shorter column length.

Ultra-high performance liquid chromatography (UHPLC) comes at a price of much higher pressure when sub-2 μm particles are employed. The revolutionary Ascentis® Express 2.7 μm Fused-Core silica particle (Figure 1) has quickly become accepted as an attractive alternative because it is equivalent in performance to particles in the sub-2 μm range. With a very narrow particle size distribution, Ascentis® Express columns employ conventional 2 μm frits and operate ruggedly at much lower pressures that are within the comfort zone of conventional HPLC instruments. 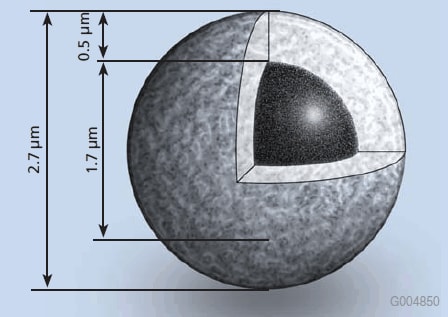 Why Do We Need Different HPLC Phases?

Even though new column technologies have more than doubled the plates per meter possible with traditional 5 μm columns, resolution still cannot be routinely achieved in every case without the ability to adjust retention and selectivity by proper selection of column stationary and mobile phases. This article features Ascentis® Express Phenyl-Hexyl phase, a new addition to the Fused-Core column family, and describes how column selectivity and higher efficiency can be coupled to achieve much faster separations than have previously been possible.

The vast majority of UHPLC separations have been carried out with C18 columns in the classic reversed-phase (RP) mode; however, suppliers now offer many different phases. Although no one would dispute the fact that UHPLC columns with different phases are needed, very little has been published yet on the performance that can be expected from UHPLC columns having different, complementary selectivity to C18 and C8. Two of the most popular polar-RP phases are RP-Amide, which is often categorized as an embedded polar-group phase, and Phenyl, which can interact with solutes by π-π mechanisms. A brief retention and selectivity comparison for the Ascentis® Express column family is given in Table 1.

C18 and C8 phases are highly popular because they are stable, reproducible, and easy-to-use. Retention correlates closely with log P values, which have been established for many solutes. Solute ionization causes retention to decrease in a predictable manner and is relatively easy to control by adding dilute acids, bases, and buffers to the mobile phase. Changing the organic component of the mobile phase between acetonitrile and methanol (or other solvents) allows the user to tweak resolution because solvation affects phase structure and selectivity. Temperature is also a useful variable for optimizing phase selectivity. Columns with C18 and C8 phases will frequently give optimum resolution when solutes are nonpolar or slightly polar; however, columns with polar-RP phases such as RP-Amide or Phenyl-Hexyl will often show improved retention and selectivity for more polar solutes. It should be emphasized that even polar-RP phases have a significant alkyl phase character in addition to their polar character. The same mobile phase solvents and techniques may be employed with polar-RP phases, with comparable phase stability to C18.

The RP-Amide phase is complementary to C18 because the amide group has several unique features: 1) strong interaction by H-bonding when solutes can donate or accept protons, 2) effective shielding of silanols by internal H-bonding between amide group and silica surface, and 3) the ability to wet and operate well, even in 100% aqueous solvents. H-bonding allows solutes with carboxyl and phenol groups to be retained much longer and separate much better on RP-Amide than on C18 or C8. Shielding prevents solutes with amino groups from interacting with silanols and can result in shorter retention and sharper peaks on amide phases. Another interesting feature of amide phases is that methanol and other alcohols become much stronger solvents when H-bonding between phase and solute occurs. Except for the special situations listed above, an RP-Amide phase often performs similar to C18 due to the long alkyl chain extending away from the surface.

The Phenyl phase has unique selectivity arising from solute interaction with the aromatic ring and its delocalized electrons. It is complementary (orthogonal) to both C18 and RP-Amide phases because of this unique aromaticity. An unsubstituted phenyl ring is a π-donor or Lewis base, which interacts strongly with π-acceptors and any electrondefi cient Lewis acid. Phenyl phases also tend to exhibit good shape selectivity, which may originate from solute multipoint interaction with the planar ring system. More retention and selectivity will often be observed for solutes with aromatic electron-withdrawing groups (fluorine, nitro, etc.) or with a delocalized heterocyclic ring system such as the benzodiazepine compounds studied.

Low-pressure drop with high efficiency and a flat van Deemter curve have been confirmed for Phenyl-Hexyl, as shown in Figure 2. In general, more than twice the column efficiency of 5 μm particles can be expected for all Ascentis® Express Fused-Core columns at pressures that are easily managed with all HPLC instruments. Note that 20,000 plates have been achieved for a 10 cm x 3 mm I.D. column operating at optimum flow. A Jasco X-LC HPLC instrument was used for the study. As shown in Figure 3, the selectivity of Ascentis® Express Phenyl-Hexyl is very similar to that of other commercial Phenyl columns, so methods can be readily transferred between columns. The difference in efficiency and pressure drop for the two porous 3 μm columns can be explained by different particle size distributions. 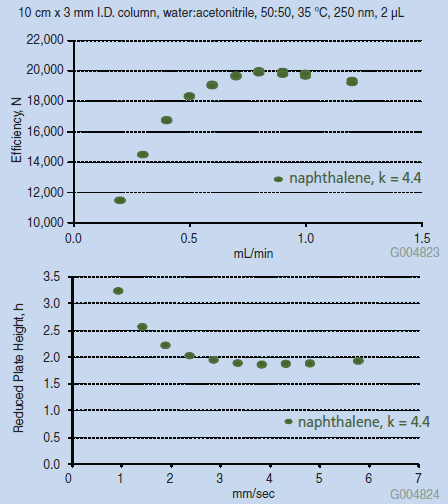 Figures 4-6 show comparisons of five benzodiazepines separated on the four Ascentis® Express RP phases in water:acetonitrile and water:methanol mobile phases. No additives were employed in order to observe the interaction between these polar solutes and the different phases; however, a dilute buffer will normally be used for development of a validated method. The addition of 10-20 mM buffer at neutral pH typically has little or no effect upon the separation with these highly deactivated column phases. 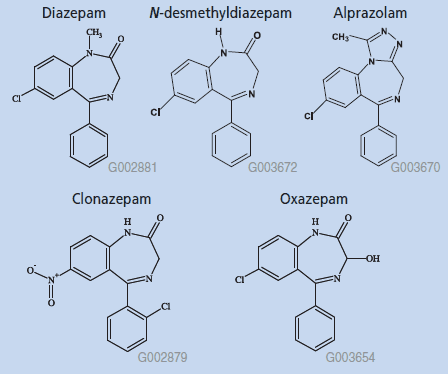 Figure 5. Benzodiazepines in 35% Acetonitrile Mobile Phase with no Additive

Figure 6. Benzodiazepines in 60% Methanol Mobile Phase with no Additive

Note that overall retention in acetonitrile is similar for the four bonded phases, but elution order is different. The two less polar compounds, diazepam and desmethyldiazepam, elute late and show the same order for all columns due to predominance of hydrophobic interactions. The more polar solutes, however, elute earlier and interact differently with Phenyl-Hexyl and the other phases. With this test sample and operating conditions, three of the four Ascentis® Express RP columns provide good resolution with different selectivity; however, Phenyl-Hexyl shows the best retention and selectivity.

A switch to water:methanol in Figure 6 shows a dramatic change in retention for Ascentis® Express Phenyl- Hexyl. In water:methanol mobile phase, the phenyl group interacts much more strongly than the other phases with the solute heterocyclic ring system, presumably by a π-π mechanism. Kazakevitch (1) has published evidence that methanol forms only monolayer coverage on aromatic phases (and also thinly solvates other phases), which allows the aromatic selectivity to shine through more strongly. Elution order for the polar compounds also changes from that of water:acetonitrile conditions. For this test sample, Ascentis® Express Phenyl-Hexyl selectivity is clearly superior in water:methanol to the other phases.

A major objective for development of UHPLC columns is to gain separation speed and sample throughput by using shorter columns at higher flow rates. These columns also improve sensitivity and uses less solvent. The flat van Deemter curve shown in Figure 2 allows an increase in flow rate and mobile phase velocity without a significant loss in resolution. This result is illustrated in Figure 7 for a neutral polar test mix in water:acetonitrile mobile phase. 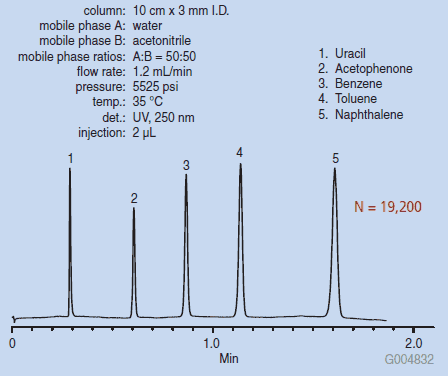