The glycan pool released from a glycoprotein can be separated into components depending upon the characteristics of the glycans and the HPLC matrices used. Normal phase, weak anion exchange, and reversed phase chromatography are most commonly used in conjunction with fluorescent-labeled oligosaccharides for the separation of sialylated and neutral N- and O-linked glycans. High pH anion exchange chromatography with pulsed amperometric detection (HPAE-PAD) can be used with native glycans, but it has a major limitation in that the separation is achieved in high molarity sodium hydroxide that must be removed prior to recovering glycans for further structural analysis.

The column used in normal phase chromatography consists of a matrix with imide or amide functional groups. Samples are applied in an organic solvent solution to the column and then eluted with increasing concentration of aqueous buffer. This exploits the subtle differences in hydrophilicity between individual glycans and their affinity for the column matrix, thereby achieving high resolution and reproducibility. The ability to analyze sialylated and neutral sugars in one chromatographic run makes it a useful technique for profiling both N- and Oglycan pools, and for making comparisons between different glycan samples. Figures 1 and 2 show the elution profiles of N-linked glycans released from two model glycoproteins, RNase B and fetuin, respectively. 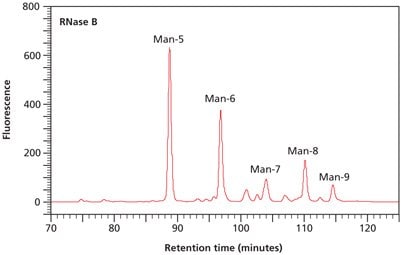 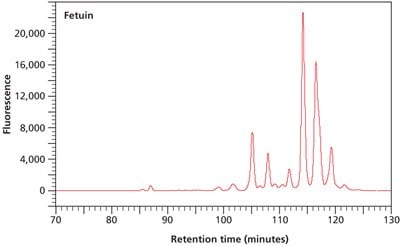 Dextran ladder (Product No. D3818) is a source of glucose oligomers and may be used as an external standard. The elution position of each peak is expressed in glucose units (gu). The elution positions of peaks in an unknown glycan pool are assigned an overall gu value by comparison with the standard dextran ladder. These values may then be used to predict possible structures for unknown glycans. For example, it has been reported that the glycans released from RNase B consist solely of N-linked oligomannose structures. The five peaks obtained upon profiling of the glycans from RNase B can therefore be assigned structures ranging from Man-5 to Man-9, as indicated on Figure 1.

Weak anion exchange chromatography relies upon the relative binding affinities of the charged glycans to the weak anion exchange matrix in the column. This type of chromatography separates N- and O-linked glycans on the basis of the number of charge groups they contain. The elution position is therefore determined by the number of sialic acid, sulfate, phosphate, or uronic acid moieties present on the glycan, but also to some extent by the size of the glycan. Thus, within one charge band, larger structures elute before smaller ones. For example, Figure 3(A) shows the separation of the N-linked glycan library released from fetuin into five major peaks. The flow-through peak contains neutral glycans, while peaks eluting with increasing time represent mono-, di-, tri-, and tetrasialylated glycans of fetuin.

In some of these charge classes, such as the disialylated glycan peak area in Figure 3(A), the partially-resolved peak contains bi- and triantennary structures with the triantennary glycans eluting first. The peaks corresponding to each charge band can be collected, concentrated and further separated and analyzed by normal phase chromatography. Two examples are shown in Figures 3(B) and 3(C).

Reversed phase chromatography separates sugars on the basis of hydrophobicity and can be carried out on a C18 column. This method is complementary to normal phase chromatography, allowing some glycans that co-elute on one system to be resolved by the other system. This approach is important during structure determination of the glycan to assess the shift in the retention time upon treatment with a particular exoglycosidase. The sample is applied in aqueous buffer to the column and eluted with increasing concentration of organic solvent. Unlike the normal phase chromatography, the elution positions of glycans are measured by comparison with an arabinose ladder and assigned as arabinose units (AU).

Along with fluorescent labeling of glycans and analysis by normal phase HPLC, an external standard is often used to calibrate the HPLC system. Partially hydrolyzed dextran, consisting of a variable number of monomeric glucose units, may be used as an external standard after fluorescent labeling. This dextran standard has a characteristic ladder profile from monomeric glucose to approximately a 20mer of glucose oligosaccharide, depending on the chromatographic conditions employed (Figure 4). The elution position of each peak in this ladder is expressed as a glucose unit (gu) and is used to assign gu values to peaks in the released glycan pool.

The Dextran Ladder is prepared by partial acid hydrolysis of dextran from Leuconostoc mesenteroides with an average molecular mass of 100‑200 kDa. A mixture of α(1→6) linked glucose oligosaccharides of various lengths is produced. The Dextran Ladder may be fluorescently labeled with our GlycoProfile 2‑AB or 2‑AA Labeling Kits.

The purity and structural integrity of the ladder is assessed by fluorescently labeling an aliquot and subsequent analysis by normal phase HPLC. The separation of the different glucose oligomers on an amide HPLC column is shown. 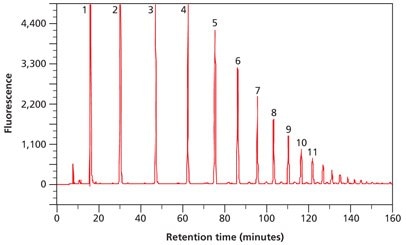