Shifts away from normal global DNA methylation levels have been observed in various cancers, neurological disorders, autoimmune diseases (such as lupus and cardiovascular diseases), and aging.10

The Imprint Methylated DNA Quantification Kit provides a high-throughput, non-radioactive means of measuring global DNA methylation shifts in about half of a day.

This kit contains all reagents required to detect relative levels of methylated DNA. Up to 200 ng of purified DNA is bound to the wells of the assay strip. The methylated DNA is detected using the Capture and Detection antibodies, then quantified colorimetrically. The amount of methylated DNA present in the sample is proportional to the absorbance measured.

A methylated DNA control is provided. A standard curve can be performed (range: 10-100 ng) or a single quantity of DNA can be used as a positive control. Because global methylation can vary from tissue to tissue, and from normal and diseased states, it is advised to run replicate samples at different DNA concentrations to ensure that the signal generated falls within the detection range of the plate reader used.

The kit will allow the user to determine relative methylation states of two different DNA samples.

The kit is shipped on ice, but components should be stored as indicated in the table below. 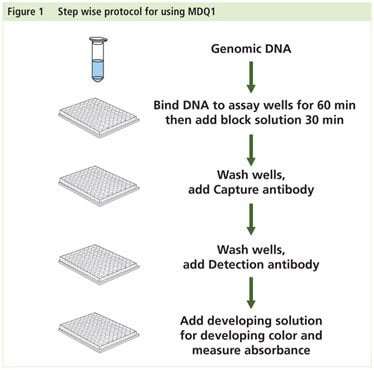 For the 48-reaction kit, add 11 mL of 10x Wash Buffer to 99 mL of Water, Molecular Biology Reagent. Store at room temperature for up to six months.

For the 96-reaction kit, add 22 mL of 10x Wash Buffer to 198 mL of Water, Molecular Biology Reagent. Store at room temperature for up to six months.

Dilute sample or control DNA in DNA Binding Solution. Each well can bind a maximum of 200 ng of total DNA.

To calculate methylation levels relative to the Methylated Control DNA, use the following steps.

Materials and Reagents Required but Not Provided

Imprint is a registered trademark of Sigma-Aldrich Co. LLC.