Cellular differentiation, the process by which progenitor cells differentiate into specialized cell types, is fundamental to developmental biology. In the immune system, immune progenitor cells must differentiate into diverse innate and adaptive phenotypes for the body to respond to infections. In the adaptive immune system, CD4+ T cells can give rise to a variety of effector T, or “T helper” cell subsets, depending on the nature of the immune response, and subsequently release a distinct set of cytokines. During T cell differentiation, T helper (Th) cell subsets plays a critical role in the immune response repertoire, defending the body against foreign pathogens.

The major subsets of differentiated CD4+ T cells include Th1, Th2, Th17, Treg, and Tfh cells. Each subtype expresses a signature set of cytokines and/or transcription factors that directs the immune response and regulates differentiation (Figure 1). For example, Th1 CD4+ T cells are important for protecting against intracellular bacteria, fungi, and viruses, as well as being involved in some autoimmune responses. These cells mediate immune responses to intracellular pathogens by producing interferon gamma (IFN-γ), and via its secretion, activate macrophages, natural killer (NK) cells, and CD8+ T cells. In contrast, Th2 CD4+ T cells are often associated with responses during which high levels of pathogen-specific immunoglobulin are generated to neutralize large, extracellular pathogens. Th17 cells play an important role in the induction and propagation of autoimmunity. The signature cytokine of this population is IL-17, whose expression has been associated with diseases such as multiple sclerosis, rheumatoid arthritis, psoriasis, and inflammatory bowel disease as well as in allergic responses.

As CD4+ T cells differentiate towards a specific effector T cell lineage, the cells change dramatically in size — a unique physical hallmark of this differentiation process. We hypothesized that using the Scepter™ cell counter to rapidly assess size distributions of cellular populations would provide a quick, simple method for tracking T cell differentiation.

The Scepter™ cell counter combines the ease of automation with the accuracy of impedance-based counting using the Coulter principle in an affordable, handheld format. The instrumentation has been collapsed into a device the size of a pipette, and uses a combination of analog and digital hardware for sensing, signal processing, data storage, and graphical display in the form of a histogram. The histogram output provides a quick snapshot of cell size and density.

In this study, we demonstrate a method for driving murine CD4+ T cell differentiation towards Th1, Th2, or Th17 cells in vitro and measuring cell size changes before and after this process, using the Scepter™ cell counter. We have employed Scepter™ technology for cell volume/size determination to investigate the relationship between cell differentiation and cell size changes. We confirmed T cell differentiation status by using a flow cytometry assay to measure intracellular cytokine production for Th1, Th2, and Th17 cell types. Although the Scepter™ cell counter was intended here primarily as a cell counting device, we also demonstrate how this instrument can function as a reliable tool for other, diverse biological applications. Figure 1. Effector CD4+ T cell lineage commitment. CD4+ T cells can give rise to many subtypes, depending on the required immune response. A complex process that includes activation of T cell receptors, along with a local cytokine environment, polarizes CD4+ T cells to a defined lineage of mature cytokine-producing helper T cells and Treg cells.

The Scepter™ cell counter was used to count samples following the detailed on-screen instructions for each step of the counting process. Briefly, the user attaches a 40 μm sensor tip, depresses the plunger, submerges the sensor into the sample, then releases the plunger, drawing 50 μL of cell suspension into the sensor. The Scepter™ device detects each cell passing through the sensor’s aperture, calculates cell concentration, and displays a size-based histogram as a function of cell diameter or volume on its screen. Scepter™ 2.1 software was then used to upload test files from the device and perform subsequent data analysis to determine cell sizes for mouse CD4+ T cell (undifferentiated) versus Th1, Th2, or Th17 effector T cell cultures (differentiated).

Before induction, undifferentiated CD4+ T cells were measured using the Scepter™ cell counter, and demonstrated a mean cell diameter of 6.4 μm (Figure 2, blue histogram). After six days in culture under the influence of Th1 phenotype-inducing reagents such as lineage-specific cytokines and growth factors, the resulting Th1 cells were measured using the Scepter™ cell counter. The mean cell diameter of this differentiated cell population was 10.4 μm (Figure 2, yellow histogram). Figure 3 shows brightfield microscopy analysis of the same cells, confirming that their average diameter had indeed increased. 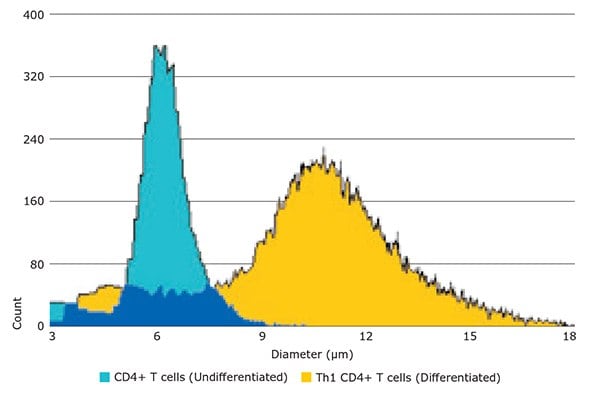 In order to validate that the cell types measured were truly differentiated cells, a flow cytometry assay was performed to measure intracellular cytokine production. As shown in Figure 4, 91.2% of the day 6-stimulated cell population expressed IFN-γ, a characteristic Th1 cell marker, confirming that the increase in cell size observed in figures 2 and 3 was indeed a phenotype of differentiated Th1 cells. Figure 3. Microscopy images before and after T cell differentiation: Confirmation that cell size changes are detectable by the Scepter™ cell counter. CD4+ T cells prior to treatment under differentiation conditions exhibited cell diameters around 5-6 μm, as shown in (A). In (B), six days after exposure to specific cytokines and growth factors to induce differentiation towards the Th1 cell lineage, cells appear much larger when visualized at the same magnification. CD4+ T Cell Differentiation Toward the Th2 and Th17 Lineages

In order to validate that the cell types measured were truly differentiated cells and specific for each cell type described, we used flow cytometry to measure intracellular cytokine production for cells exposed to each induction treatment. As shown in Figure 6, increased expression of IL-4 for Th2 cells and increased expression of IL-17 for Th17 cells confirmed that the observed increases in cell size correlated with phenotypes of differentiated cells.

Figure 5. CD4+ T cell differentiation toward Th2 and Th17 cell lineages can be clearly identified based on cell size using the Scepter™ cell counter. Using a 40 μm sensor, the Scepter™ cell counter enables the discrimination of cell types based on size, with high resolution. The size distributions of Th2 and Th17 cell populations were compared to the size distribution of the CD4+ T cell progenitor cell type. Both Th2 and Th17 cells gradually increased in size from ~6 to about 10 μm after six days of differentiation. Figure 6. Flow cytometry confirmation of the differentiation of enriched CD4+ T cells to Th2 and Th17 cells. Cell types that demonstrated larger cell diameters as detected by the Scepter™ cell counter had been cultured for six days as shown in (B) and (D), whereas their progenitor cell types are shown in (A) and (C). Differentiation-treated cells in (B) and (D) expressed the signature cytokines IL-4 and IL-17 for Th2 and Th17 subtypes, respectively. Table 1 and Table 2 were summarized in a bar graph (Figure 7) showing the clear size difference between undifferentiated and differentiated CD4+ T cell populations, underscoring the utility of the Scepter™ cell counter to provide a rapid, simple, accurate method for tracking immune response.

T cell differentiation and its role in the immune response are integral for both innate and adaptive immunity. The importance of effector T cells and their ability to combat various types of pathogens, as well as maintaining immune homeostasis, is a hallmark of the complexity of mammalian immune systems. The process of differentiation into T helper (Th) cell subsets specialized for diverse pathogens and functions is key to a varied and effective immune response. Dysregulated Th cell function often leads to inefficient clearance of pathogens, which can cause diseases of inflammation and may also impact autoimmunity.

Differentiation of CD4+ T cells into fully functional effector T cells is characterized by the production of signature cytokines and a concomitant increase in cell size. As demonstrated in this study, Th1, Th2, and Th17 cells expanded from approximately 6 to 10 μm when compared to the unstimulated CD4+ T cell phenotype. This expansion upon differentiation was simply and accurately measured using the Scepter™ cell counter.