Numerous bioassays utilize cell cultures to quantitate the effects of potential growth modifiers. These assays are typically performed in 96-well microwell plates for “convenience” and are usually followed by tedious cell harvesting. The MultiScreen assay system, however, offers an alternative means of carrying out assays utilizing cell cultures, such as 3H-thymidine uptake studies. The sterilized MultiScreen 96-well plates allow the entire procedure, from cell growth to scintillation counting, to be performed within the same plate. In addition to the added convenience, the system also reduces the volume of radioactive waste generated.

Cell culture on microporous membranes has been demonstrated to induce increased cellular differentiation, particularly when used in conjunction with extracellular matrix materials. Suspension cells, typically lymphocytes, and attachment-dependent cell lines are routinely used to investigate growth factors such as cytokines, signal transduction factors such as kinases and phosphatases, and other bioactive compounds. The wells of the MultiScreen plates, each fitted with a microporous membrane, are suitable for cell culture applications such as the growth of hybridomas (4). Protocols for the growth of attachment-dependent cell lines, however, require some modifications in technique. This MultiScreen Method describes the procedures for the growth of attachment-dependent (epithelial and fibroblast) cell lines on the membrane surface of MultiScreen-HA (mixed cellulose esters) and MultiScreen-HV (Durapore® PVDF) 96- well filter plates. The mixed cellulose ester membranes (HATF, 0.45 µm) do not generally require coating for cell attachment and growth, while the Durapore membranes require coating with a cell adhesion molecule (CAM) or extracellular matrix (ECM) component. The utility of the MultiScreen system in a cell proliferation assay involving mouse 3T3 fibroblasts stimulated with growth factor and newly synthesized DNA, measured by the classical 3H-thymidine uptake methodology, is also shown. In addition, the use of direct microplate liquid scintillation readers with attachment-dependent cell growth assays is also demonstrated.

3H-Thymidine incorporation was determined by growing the cells without feeding to deplete the media of serum, followed by the addition of serum to stimulate growth and 3H-thymidine uptake. Cells were incubated for the indicated times (see Table 1) to monitor proliferation. The filtration plates were washed three times with 0.2 mL phosphate-buffered saline (PBS) followed by two ethanol washes. The underdrain of the plate was removed, and the membrane was dried under a heat lamp. The membranes in the individual wells were punched “damp” for the HA type membrane plates. The wells were punched with the MultiScreen assay system punch and collected into 500 µL, 0.42% sodium hypochlorite (1: 12 dilution of common household bleach) and incubated on a rotary orbital shaker for 30 minutes. Though this technology is still available, TopCount or Trilux plate readers are the more common way of reading the plates. Liquid scintillation cocktail (LSC), (Ready Safe™, Beckman Instruments) was added, the vials inverted and counted in Beckman Model LS 5000 TD liquid scintillation counter. All plotted results are given as the mean and standard deviation of 6 wells. A chemiluminescent bleach control (500 µL diluted bleach and 5 mL LSC) and fresh bleach solutions were prepared daily.

Mouse fibroblasts 3T3 (ATCC# CCL92) were grown in 10% FBS- DMEM media as described above. Rat tail collagen (RTC, 50 µL/well) coated MultiScreen-HV Durapore plates were used the next day, or were stored under sterile conditions after collagen coating for up to 2 weeks at 4 C. The 3T3 cells were seeded using 104 cells per well on Day 0, fed on Day 4, and stimulated on Day 9 with Bovine Pituitary Extract (BPE, Collaborative Biomedical, Bedford, MA). On day 10, 3H-thymidine was added, incubated for 3 – 4 hours, and processed as described above except that Ultima Gold™ scintillation fluid, (Packard Instruments) was used in combination with a dilution of bleach.

While the membrane surface of the MultiScreen plate wells provides an excellent means of carrying out studies on attachment- dependent cell lines, it may be necessary to coat the membrane initially to ensure cell attachment and proliferation. In these studies, the PVDF Durapore membrane on the MultiScreen-HV plate (0.45 µM) required coating with an ECM (such as collagen) for cells to attach.

Uncoated MultiScreen-HV membrane controls demonstrated very low levels of cell attachment (data not shown). Type I collagens, including calf skin and rat tail types, provided an excellent surface for MDCK cell attachment and growth as shown in Table 1. To remove the stained cells for microscopic examination from the plate, a scalpel was used initially. It was also determined that punched samples could be used as long as the “hole” in the center of the membrane resulting from the punch did not interfere with observation. MultiScreen-HA filtration plates (with mixed cellulose ester membranes), however, do not generally require ECM coating for most established cell lines. The MultiScreen-HA plate has already been successfully utilized for thymidine uptake studies in Human Ha-ras oncogene expressing NIH 3T3 cells. However, the MDCK cells will grow faster to confluence (Table 2) and will demonstrate increased differentiation properties when cultured on an ECM coated surface.

The growth level of the cell layer on the MultiScreen plate membranes affects the assay washing techniques. Assuming a monolayer is not necessary, the cells can be easily washed and processed when subconfluent, as was done in these experiments. For rapid processing, tight junction forming epithelial cell cultures should be grown only until they are subconfluent to allow for convenient washing by vacuum filtration.

Once tight junction forming epithelial cells grow to the point that an integral monolayer is established, the cells cannot be washed using a vacuum manifold; it is necessary that wash reagents be removed from above the monolayer. MDCK cells allowed to grow for four or more days established a complete monolayer and were washed by inverting the plates or by careful aspiration, as required for processing or feeding. Both subconfluent and confluent monolayers were easily punched and collected into vials.

High efficiency detection of intracellular 3H on PVDF microporous membranes has previously been shown to require a brief (30 min) incubation in diluted bleach to liberate the weak tritium activity prior to the addition of LSC. The bleach control was found to be critical since some lots of liquid scintillation cocktails were found to possess significant chemiluminescent activity. These cocktails were generally avoided, although if used, the background counts usually returned to normal levels overnight, and the samples could easily be recounted to determine actual tritium levels. Fibroblasts grown on the MultiScreen-HV plates showed a typical dose- response to the presence of BPE in the culture media. BPE contains a variety of mammalian growth factors including basic fibroblast growth factor. This well characterized fibroblast cell line is frequently used for target cells to determine the activity of both known and potential growth factors. These mouse fibroblasts were shown to form confluent monolayers that were easily washed using vacuum filtration in contrast to the results found for the MDCK epithelial cells. A typical BPE dose response curve is shown in Figure 4. 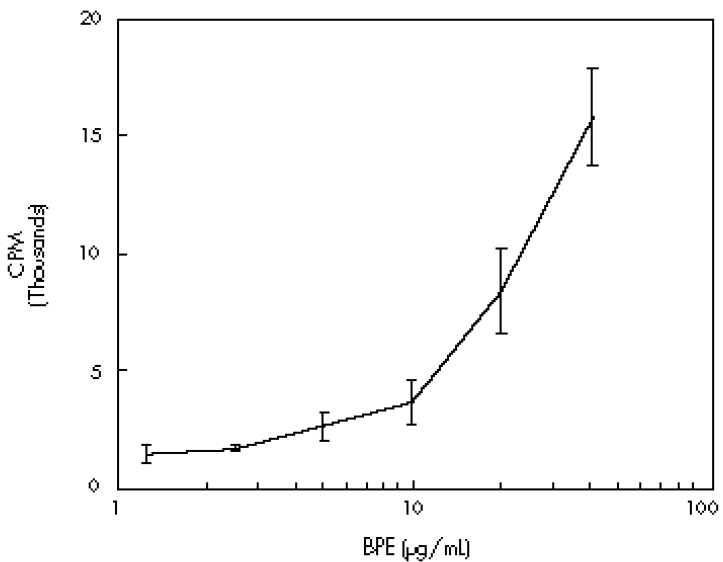 Figure 5 shows a BPE dose response comparison between 3T3 cells grown on plastic, harvested and counted by traditional liquid scintillation counting, and cells grown on a MultiScreen plate and counted directly. The response of the cells to BPE growth factor was found to be comparable. Further examination revealed that the highly stimulated cells (above 120 µg BPE/mL) were found to be lost from the tissue culture plastic by the media washes prior to harvesting while the vacuum filtered, washed cells in the MultiScreen plate were fully retained. 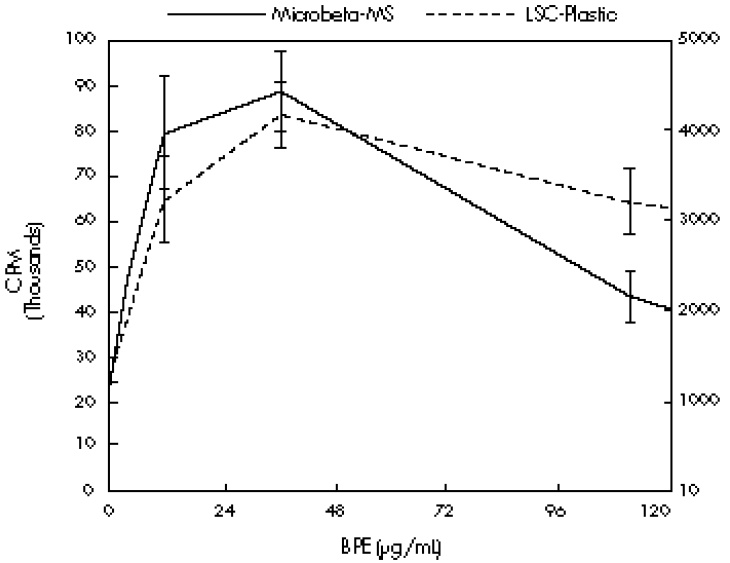 Many laboratories currently require high throughput screening capabilities to determine the activity of numerous unknown compounds daily. The MultiScreen system offers an alternative means of carrying out attachment-dependent cell growth and proliferation studies such as the thymidine uptake assays described here. Combining the MultiScreen assay system features for cell growth, incubation, washing and punching for subsequent radioisotope detection provides a powerful new analytical tool for cell culture applications. The system enhances assay consistency by eliminating the need to transfer samples between different wells and vials and allows more efficient sample processing and faster throughput than traditional cell harvesting and scintillation counting approaches. The use of direct microplate scintillation counting (e.g., the Wallac Microbeta system) enhances throughput and eliminates the waste involved in counting up to 96 individual samples via traditional approaches. Cell proliferation assays were found to be more rapid and convenient when performed with the MultiScreen assay system with significantly reduced radioactive waste generated, while still yielding comparable sensitivity for detecting growth factor activity. To enhance cell growth, extracellular matrix components proven for cell culture applications (such as collagen and laminin) can be easily applied to the surfaces of the MultiScreen membranes. Such coating protocols allow assays to be performed on attachment-dependent cells (such as epithelial or fibroblast cells), entirely in the same incubation plate.