In the emerging field of organic printable electronics, such as OLEDs and organic photovoltaics (OPVs), there is a significant need for improved organic conducting and semiconducting materials. This paper reports our recent progress in two fields: 1) the development of solvent-based dispersions of the intrinsically conducting polymer (ICP) poly(3,4- ethylenedioxythiophene) (PEDOT) and 2) the synthesis of new electron-deficient (n-type) semiconducting polymers.

ICPs are polymers with extended π conjugation along the molecular backbone, and their conductivity can be changed by several orders of magnitude from a semiconducting state to a metallic state by doping. p-Doping is achieved by partial oxidation of the polymer by a chemical oxidant or an electrochemical method, and causes depopulation of the bonding π orbital (HOMO) with the formation of “holes”.1

Despite the promise of ICPs since their discovery in the 1970s, relatively few commercial products have succeeded, primarily because of their limited performance and poor solubility, which makes processing difficult. PEDOT is one of the most commonly used ICPs because of its good electrical conductivity, environmental stability in the doped (conducting) form, and reasonable optical transparency when used as a thin film.2 A common way to apply a PEDOT coating is to use a water dispersion consisting of a blend of PEDOT and the polyanion poly(styrene sulfonate) or PEDOT-PSS. Several grades of conductive PEDOT-PSS blends are commercially available (Prod. No. 655201, 483095, 560596). A low-conductivity grade has been successfully employed as the hole injection layer in OLEDs and OPVs and the high conductivity grades are being evaluated as transparent conductors with work functions of ca. 5.1 eV.3,4

Despite the success of the PEDOT-PSS blends, it has been shown that the presence of the strongly acidic and hygroscopic PSS can sometimes degrade device lifetime and performance.5–7 With recent advances in flexible, printed electronic devices, there is increasing interest in optically transparent conducting polymer materials that can be processed from non-hygroscopic solvents and that will wet hydrophobic plastic substrates.

TDA Research, Inc. (TDA) developed and manufactures solvent-dispersable forms of PEDOT under the trademark Aedotron™ polymers. Selected grades of these materials are commercially available. Our approach is to synthesize block copolymers of doped PEDOT and a flexible, soluble polymer such as poly(ethylene glycol) (PEG).8 We have developed several block copolymer geometries (Figure 1) and methods to purify and process them to form stable colloidal dispersions in organic solvents. Figure 2 shows the chemical structure of a multi-block Aedotron™ P-NM and a tri-block Aedotron™ C3-NM copolymers; Table 1 summarizes some of the important properties of two representative materials. By carefully controlling block composition, molecular weight, block ratio, and dopant type, we can vary the bulk conductivity of the copolymers from 10–4 S/cm to 60 S/cm. The Aedotron™ materials are neither acidic nor corrosive and can be used to spin cast or otherwise apply non-hygroscopic thin films of the copolymers on a variety of inorganic and organic substrates. These colloidal dispersions are stabilized by the highly solvated PEG chains which sterically limit the aggregation of the PEDOT blocks. Our copolymers easily disperse in polar aprotic solvents; we have selected propylene carbonate for applications that require a high boiling solvent, and nitromethane for applications that require a volatile solvent. Other solvents are being explored, especially for the low conductivity materials.

Since the colloidal stabilization mechanism in our products is independent from the polymer doping, the dopant can be controllably varied to tune the bulk conductivity and the work function of our copolymers. Typically, para-toluenesulphonate (PTS) doped copolymers (Aedotron™ P 649791) have a lower conductivity, making them useful for antistatic dissipation applications and as an electrode interface layer in OLEDs. Aedotron™ P polymers usually have larger particle sizes in suspension and are somewhat amenable to being dispersed in less polar solvents. Perchlorate-doped copolymers (Aedotron™ C 649805, 649783) typically have a higher conductivity with thin films that are more transparent. With the improved tri-block copolymer (Aedotron™ C-3 687316, Figure 2b) we can spin cast thin films with 1000 Ohms/square sheet resistance at 80% transmittance (400–800 nm average) with good wetting properties on polycarbonate and other plastic films. Figure 3 shows the UV-vis transmission spectra for 1-, 2-, and 3-layer films spun on glass at 1000 RPM, and each data trace is labeled with the measured sheet resistance for that film. These properties meet requirements for a transparent conductor that can be used in touch sensitive displays and electroluminescent lamps and displays. The tri-block copolymer has smaller particle size (290 nm) in suspension than our multi-block copolymers, and form thin films with lower surface roughness (<10 nm), as determined by contact-mode Atomic Force Microscopy. 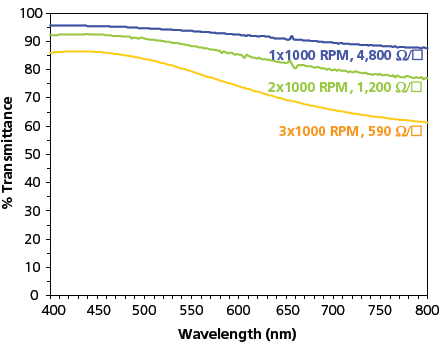 The unifying basic requirement of most thin-film, organic electronic devices like OLEDs and OPVs is that they contain at least two semiconducting materials with offsets in their molecular orbital (HUMO-LUMO) energy levels. In the organic semiconductor world, one can create such an energy offset by forming an interface between a more electron-rich (p-type) semiconductor and an electron-poor (n-type) material. It is at this interface that charge separation or recombination typically occurs. Moreover, the extent of the offset and the proper alignment of the HOMO-LUMO bands of the p-type and ntype semiconductors are critical to the efficient operation of the device. It is, therefore, important to have a wide variety of p-type and n-type materials to choose from. There are a number of available classes of relatively electron-rich, p-type semiconducting molecules and polymers. In contrast, there are few electron-poor, n-type semiconducting molecules, like metalloporphyrins and methanofullerenes. Even rarer are the n-type semiconducting, π-conjugated polymers like cyanoderivatives of poly(p-phenylenevinylenes).

Our group has been working to develop and produce new ntype semiconducting, p-conjugated polymers and oligomers. Our approach is quite similar to what has been done for many years to produce electron-rich, π-doped conducting polymers: we introduce a heteroatom to the π-conjugated backbone that can alter the electron density of the overall polymer. The heteroatom that we add is boron, whose vacant p orbitals are conjugated to the π electronic system of unsaturated repeat units of the polymer. Because of the absence of electrons in the boron p orbitals, the overall π electronic system of the polymer becomes inherently electron deficient and, therefore, the polymer has n-type electronic properties.

We have found that careful purification of the polymers is critical to preserve the solubility of these materials. Chloroform and chlorobenzene are preferred solvents for most of these polymers. All the prepared organoboron polymers are colored and the majority are strongly photoluminescent in the blue to green region of the visible spectrum (Figure 5). Air-stability has not been fully assessed yet, but preliminary evidence indicates that it varies with the polymer structure: Boramer™ T01 polymer is more sensitive to air than Boramer™ TC03 polymer. We recommend handling both materials under an inert atmosphere. 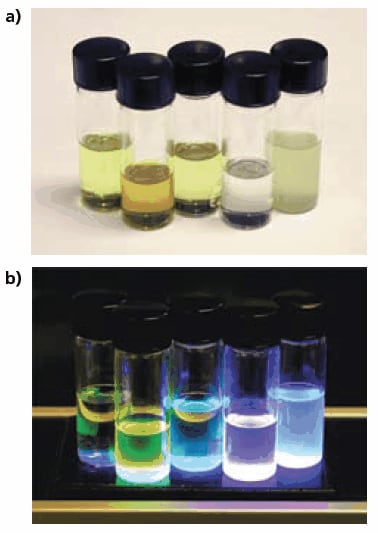 Figure 5.Chloroform solutions of TDA’s Boramer™ polymers under ambient (a) and ultraviolet (b) lighting.

The electronic band structure of selected Boramer™ materials was characterized via ultraviolet photoelectron spectroscopy (UPS) at Colorado State University (Fort Collins, CO). UPS gives a direct measure of the electron energies of the HOMO level to Fermi level gap at the low binding energy end of the spectrum. UPS results conclusively prove that our polymers are in fact n-type semiconductors and that their valence band (VB) resides at a similar energy to the VB of common n-type organic semiconductors including methanofullerenes (PCBM) and cyano-PPV. The polymer bandgap was estimated from UV-Vis spectra and was found to be in the range of 2.6–2.9 eV. Figure 6 shows the HOMO-LUMO levels of two of our boron-containing, π-conjugated polymers (orange) along with familiar p-type (blue) and other n-type organic materials (green). The energy level data clearly indicate their n-type character, with Boromer™ T01 having the lowest lying work function and HOMO-LUMO levels.

During our work on these n-type materials we collaborated with the National Renewable Energy Laboratory (NREL, Golden, CO) to evaluate the properties of our polymers for use in OPV prototypes. NREL carried out photoluminescence quenching (PLQ) experiments and built OPV devices with two of the materials supplied by TDA. Results from PLQ indicated that our polymers efficiently quench the excited state of a typical p-type semiconductor (MDMO-PPV) with efficiencies up to 83%. This indicates that, in fact, efficient electron transfer occurs from this p-type semiconductor to our material. One of the prepared polymers was also used as the electrontransporting and light-emitting layer for the fabrication of an OLED prototype. Bright green light emission was observed (similar in color to the solid-state luminescence of our polymer) at a turn-on voltage of approximately 6 V.

We would like to thank Emily Chang, Raechelle D’Sa, Cory Kruetzer, and Carolina Wilson at TDA Research, Inc. for the synthetic work, Profs. Anthony Caruso and Doug Schulz at North Dakota State University for the work function measurements, Prof. Bruce Parkinson and Dr. Bengt Jaekel at Colorado State University for the UPS measurements, and Dr. Sean Shaheen, Dr. Muhammet Kose, Dr. Don Selmarten, and Cary Allen at NREL for characterizing the n-type materials in organic photovoltaics. This work was carried out in part with funding from the National Science Foundation (contracts DMI- 0319320, OII-0539625, DMI-0110105) and the Office of the Secretary of Defense (contract N00164-06-C-6042).