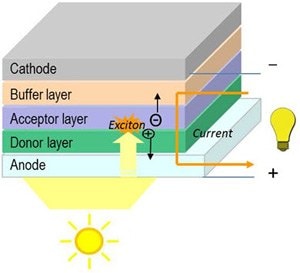 In a bilayer OPV cell, sunlight is absorbed in the photoactive layers composed of donor and acceptor semiconducting organic materials to generate photocurrents. The donor material (D) donates electrons and mainly transports holes and the acceptor material (A) withdraws electrons and mainly transports electrons. As depicted in Figure 2, those photoactive materials harvest photons from sunlight to form excitons, in which electrons are excited from the valence band into the conduction band (Light Absorption). Due to the concentration gradient, the excitons diffuse to the donor/acceptor interface (Exciton Diffusion) and separate into free holes (positive charge carriers) and electrons (negative charge carriers) (Charge Separation). A photovoltaic is generated when the holes and electrons move to the corresponding electrodes by following either donor or acceptor phase (Charge Extraction).

A primary advantage of OPV technology over inorganic counterparts is its ability to be utilized in large area and flexible solar modules, specially facilitating roll-to-roll (R2R) production. Additionally, manufacturing cost can be reduced for organic solar cells due to their lower cost compared to silicon-based materials and the ease of device manufacturing. However, to catch up with the performance of silicon based solar cells, both donor and acceptor materials in an OPV need to have good extinction coefficients, high stabilities and good film morphologies. Since the donor plays a critical role as the absorber to solar photon flux, donor materials require wide optical absorption to match the solar spectrum. Another basic requirement for ideal donor/acceptor is a large hole/electron mobility to maximize charge transport. The significant improvement of OPV device performance has been accomplished by introducing various OPV architectures, such as bulk-heterojuction (BHJ) and inverted device structures, and developing low band gap conjugated polymers and innovative organic small molecules as donor materials.