Scientists at Sigma-Aldrich routinely determine number-average molecular weight (Mn) by 1H NMR end-group analysis for polymers having Mn values under 3,000. Sensitivity of the instrument and the subsequent ability to detect end-group protons will determine the upper limit that can be measured. The method relies on a few simple needs.

Once the ratio of protons on the end-groups to protons on the polymer chain is determined, using the NMR, simple math can be applied to generate the Mn value.

The following example illustrates this method: 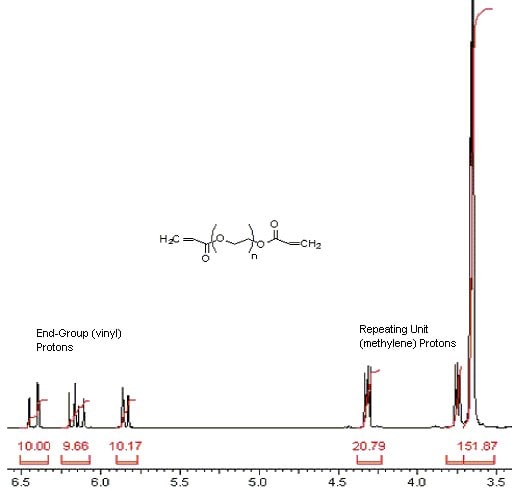 1H NMR is also a useful tool for calculating the monomer ratio in copolymers. As the following example illustrates, this method can be used even in situations where repeating unit proton signals overlap, as long as there is a clearly distinguishable signal from one of the repeating units. 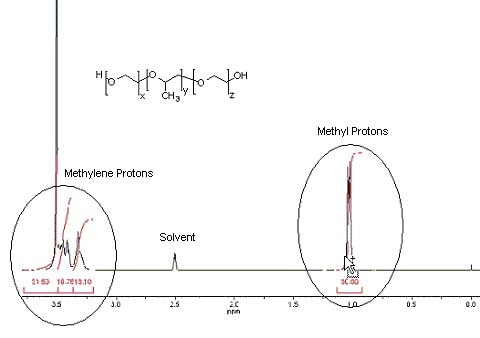 Note: There are 3 PG proton signals (representing the propylene glycol CH & CH2 groups) in the 3.0-4.0 ppm region overlapping the ethylene glycol methylene (CH2) protons in the same region. The integral for these 3 PG protons will be equal to the integral representing the 3 previously identified propylene glycol methyl (CH3) protons. In order to determine the molar ratio from the EG units, the PG integral must be subtracted from the total integral in the 3.0-4.0 ppm region.

Locate the signals for the methylene protons (between 3.2 & 3.7 ppm)