Autophagy is a highly regulated process by which long-lived proteins, organelles, and protein aggregates are captured within autophagosomes, which are then fused with lysosomes for degradation.1 Autophagy is often induced during metabolic stress or other adverse conditions as the degradation products can be funneled into biosynthetic pathways or used for ATP production, allowing for cellular survival by self-cannabilization.2 While required for normal homeostasis, autophagy can contribute to the development of many pathological processes, including cancer. The deregulation of autophagy occurs in multiple types of cancer and current research suggests a complex and cellular context-specific role for this process during oncogenic transformation. In general, autophagy seems to be tumor suppressive in normal cells and during early oncogenic transformation but may act as a critical survival pathway for established tumors.3-5

Developing and established tumors are subjected to multiple autophagy-inducing stressors, including hypoxia, low nutrient conditions, and high metabolic demands due to increased proliferation. In non-transformed cells, the effect of these stressors typically results in apoptosis or necrosis. As many cancer cells have high apoptotic thresholds, the induction of autophagy serves as a survival mechanism in many tumor cells, allowing them to escape apoptotic or necrotic death in response to metabolic crisis. The high metabolic demands of many cancer cells due to rapid proliferation may render them heavily dependent on autophagy to supply biosynthetic metabolites.6 As many cancer therapeutics are designed to chemically mimic nutrient deprivation and starvation, it is not surprising that autophagy is often upregulated in response to treatment. This increased upreglation is often associated with therapeutic resistance and may be one method these cells use to escape death.2,3,6 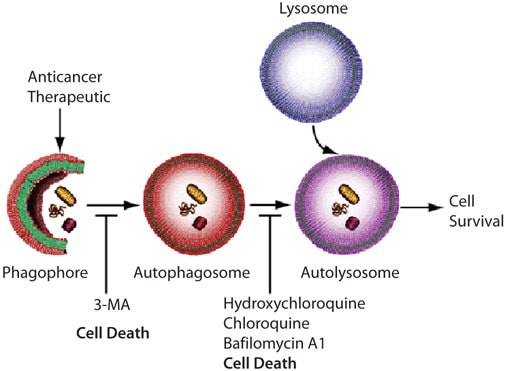