Cytochrome c is a highly conserved ~12 kDa protein consisting of a single 104 amino acid peptide with a single heme group, which is covalently attached to Cys14 and Cys17. Because of its ubiquitous nature and sequence homology, cytochrome c has been used as a model protein for molecular evolution.1 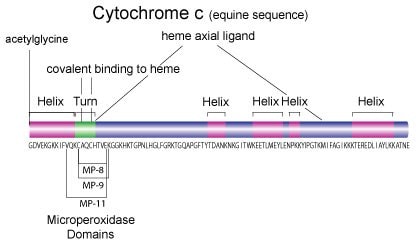 Cytochrome c is primarily known as an electron-carrying mitochondrial protein. The transition of cytochrome c between the ferrous and ferric states within the cell, makes it an efficient biological electron-transporter and it plays a vital role in cellular oxidations in both plants and animals. It is generally regarded as a universal catalyst of respiration, forming an essential electron-bridge between the respirable substrates and oxygen. Its main function in cellular respiration is to transport electrons from cytochrome c reductase (Complex III) to cytochrome oxidase (Complex IV).

Under proapoptotic conditions, two Bcl-2 family proteins, Bax and Bak associate with the voltage-dependent anion channel component of the permeability transition (PT) pores on the outer membrane of the mitochondria. This calcium-dependent process allows the release of cytochrome c from the intermembrane space of the mitochondria into the cytoplasm.6

Cytochrome c also participates in the cytosolic caspase proteolytic cascade of apoptosis as a component of the apoptotic protease activating factor (Apaf). The association of cytochrome c with Apaf-1 results in the formation of the apoptosome protein complex which can recruit and activate pro-caspase 9 (Apaf-3). Activation of caspase 9 then facilitates the downstream activation of caspases 3 and 7 resulting in apoptosis.8 The cytochrome c-mediated release of calcium from the ER helps to initiate the apoptotic cascade since activation of both caspase 9 and caspase 3 is calcium-dependent.9 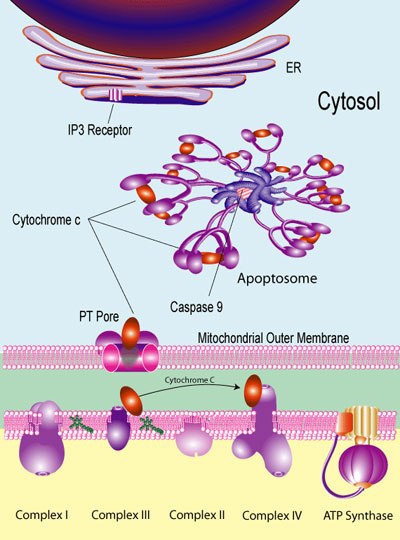 Cytochrome c has been shown to exhibit peroxidase activity. This activity is preserved in small peptide fragments that retain the bound heme group. These heme-containing peptides are termed microperoxidase and have found utility in histological absorption studies.

The unique sequence of pigeon cytochrome c is utilized for activation of specific T-cell hybridoma receptors.10

Use as a Protein Standard

Cytochrome c is commonly used as a control protein for several applications:

11 Alternatively, acetic acid may be used to prepare cytochrome c. The trichloroacetic acid method may reduce the amount of superoxide dismutase (SOD) present, but tends to cause dimerization or acid-modified structures of cytochrome c. In contrast, acetic acid preparations may have slightly higher amounts of SOD, but a lower proportion of dimeric cytochrome c.

We supply cytochrome c products predominantly in the oxidized form of the protein. The reduced form of cytochrome c can be prepared with either sodium dithionite or sodium ascorbate, followed by gel filtration.12

The following procedure is taken from our assay procedure for cytochrome oxidase. Dissolve 100 mg of cytochrome c in 8 mL of 10 mM potassium phosphate buffer, pH 7.0. Reduce the cytochrome c by adding 3–5 mg of L-ascorbic acid, sodium salt (A7631). The excess ascorbate is removed by dialyzing against 10 mM potassium phosphate buffer, pH 7.0, for 18–20 hours at 0–4 °C with three changes of buffer. Remove from dialysis and bring up to a final volume of 10 mL with the buffer.

The product is supplied as a lyophilized powder. The final step before lyophilization is extensive dialysis against 6 mM ammonium hydroxide, which is volatile under lyophilization conditions, so the final product should not contain any buffer salts. The product is mainly the oxidized form of the protein. The reduced form of cytochrome c can be prepared with either sodium dithionite or sodium ascorbate, followed by gel filtration.12 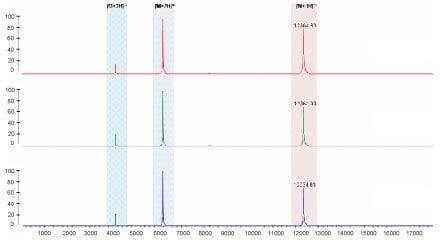 Cytochrome c is soluble in water or buffered solutions at pH 7.0±1.0 (up to 200 mg/mL), yielding a clear, dark red solution. For general purposes reconstitution is done at 10 mg/mL.

Store cytochrome c at –20 °C. The product, as supplied, is stable for 5 years.