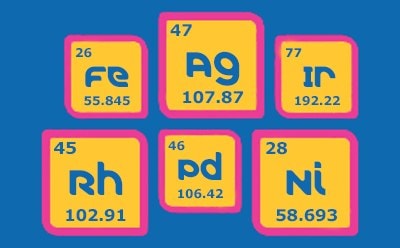 In addition, with the development of supporting ligands, they have evolved as a useful tool for various synthetic and non-synthetic transformations. Some examples of the transformations using transition metal catalysts include Stille, Buchwald-Hartwig, Negishi, Heck, Miyaura-Suzuki, and Sonogashira reactions.

No matter what your organic or organometallic catalysis requirement is, we have precisely the transition metal catalyst that you need.

We offer a variety of titanium complexes with different organic ligands for use as catalysts during organic synthesis. For example, CpTiCl3 has been employed as an effective titanium catalyst for room-temperature heterocycle annulation reactions. Other examples include the use of titanocene dichloride to convert electron-deficient olefins to diastereomerically pure 7-hydroxynorbornenes and bis(methylcyclopentadienyl)titanium dichloride for the transformation of methyl acrylates to highly substituted norbornene derivatives.

The use of vanadium as a catalyst is the second largest application for vanadium after its use as an additive to improve steel production. A vanadium catalyst can effectively activate peroxides and selectively oxidize substrates like bromides, sulfides, and alkenes. These catalysts effectively transfer oxygen atoms to a substrate that is used for obtaining valuable oxidized molecules on a large-scale reaction with a high degree of selectivity. Additionally, vanadium catalysts are efficient catalysts for olefin polymerization. Vanadium oxides can be applied in the emission standards for vehicles and the desulfurization of crude oils. Moreover, the use of ecological oxidants, e.g., hydrogen and alkyl hydroperoxide, significantly increases the potential application of vanadium catalysts at an industrial level.

Iron and iron compounds are widely used as reagents or catalysts. For example, ferric chloride and bromide have long been used as Lewis acid iron catalysts in the classic electrophilic aromatic substitution reactions. Iron complexes with organic ligands are of particular interest and can serve as environmentally friendly Fe catalysts for a host of transformations. Illustrating this point is the very useful role that iron catalysis plays in the timely study of ammonia-borane dehydrogenation process.

Copper catalysts are useful for milder reaction conditions and show excellent yields, however the chemical reactions are slow and require high temperatures. Among transition-metal mediated reactions to form carbon-carbon bonds and carbon-heteroatom bonds, copper catalysts are used in Ullmann reactions, Diels-Alder reactions, ring expansions, Castro-Stevens coupling, the Kharasch-Sosnovsky reaction, and a notable variant of the Huisgen 1,3-dipolar cycloaddition utilizing a Cu(I) catalyst developed independently by Meldal and Sharpless. We provide efficient copper catalysts and pre-catalysts as well as copper-containing Metal Organic Framework (MOF) components for all your copper catalysis needs.

Zinc catalysts find wide applicability in synthetic chemistry and organic synthesis. A zinc chloride catalyst, acting as a moderate-strength Lewis acid, can catalyze the Fischer Indole synthesis to convert aryl hydrazones to indoles, and the Friedel-Crafts Acylation to produce monoacylated products from arenes and acyl chlorides. In addition to ZnCl2, a zinc oxide catalyst can be useful in a variety of catalytic conversions. We also offer additional zinc catalysts, such as various zinc halides, that catalyze stereospecific and regioselective reactions. In addition to the catalytic properties, our zinc compounds also find applications in material science as chemiluminescent quantum dots and nanomaterials. Our zinc compounds may also be used as starting materials in the preparation of organozinc reagents used in Negishi coupling.

The zirconium-catalyzed asymmetric carboalumination (ZACA) reaction, developed by Nobel laureate Ei-ichi Negishi, is perhaps one of the best-known examples of use of zirconium catalyst. The ZACA reaction provides a means for chiral functionalization of alkenes with organoaluminum agents, catalyzed by a chiral bis(indenyl)zirconium catalyst. Another notable zirconium catalyst is zirconium dioxide or zirconia. The list of applications of zirconia catalyst in heterogeneous catalysis is rapidly growing. Some of the applications include: decomposition of nitric oxide, reduction of carboxylic acid to aldehydes, selective dehydration of secondary alcohols to terminal alkenes, and hydrogenation of carbon monoxide to isobutane.

Selective oxidative transformation of various functional groups with environment friendly and easily accessible oxidants can be readily achieved with a proper ruthenium catalyst. Ruthenium catalysts can be very powerful tool in synthetic chemistry for selective catalysis of oxidative transformations such as asymmetric epoxidation of alkenes, generation of dioxygen species, dihydroxylation of olefins, and oxidative dehydrogenation of alcohols.

Ruthenium catalysts are also widely employed in metathesis reactions, with Grubbs′ catalysts being the most well-known in the field of olefin metathesis. The wide popularity of Grubb′s catalysts can be explained by their high tolerance of various functional groups, and their high stability in air and a plethora of solvents.

The rhodium catalyst is a suitable promoter, used to activate carbon-hydrogen(C-H) bonds, and has emerged as a challenging and attractive tool for catalysis. Rhodium catalysis finds increasing interest in the catalytic dehydrogenative cross-coupling, allowing elegant C-C bond construction. Although palladium has been the metal of choice for most examples, Rh catalysts can also be suitable promoters for this activation. Additionally, rhodium provides access to important couplings, such as aryl-aryl, aryl-alkene, and alkene-alkene, as viable routes to valuable organic frameworks.

The ability to fine tune the reaction conditions (temperature, solvents, ligands, bases and other additives) of palladium catalysts makes palladium catalysis an extremely versatile tool in organic chemical synthesis. Furthermore, palladium catalysts have a very high tolerance of various functional groups and are often able to provide excellent stereo- and regio- specificity, which helps to avoid the need for protecting groups. It forms a highly versatile group of catalysts, known for use in carbon bond forming reactions (primarily C-C, C-O, C-N and C-F), such as Heck coupling, Suzuki coupling, Stille coupling, Hiyama coupling, Sonogashira coupling, Negishi coupling, and Buchwald-Hartwig amination, among others.

In heterogeneous catalysis, palladium catalysts, such as the Lindlar catalyst (or Lindlar′s Palladium), are highly efficient at facilitating selective hydrogenation. This includes the conversion of triple bonds to cis-double bonds, monohydrogenation of polyolefins, and hydrogenation of azides to amines.

We provide efficient platinum catalysts, e.g., platinum dioxide, also called Adams′ catalyst, for the hydrogenation of various functional groups and dehydrogenation reactions in organic synthesis. Platinum black, the active Pt catalyst, is formed during the reaction. Utilizing platinum catalysis on alkynes results in syn-addition, forming a cis-alkene. Two of the most important transformations using platinum catalysts include the hydrogenation of nitro compounds to amines and ketones to alcohols. Notably, reductions of alkenes can also be performed with Adams′ catalyst in the presence of nitro groups without reducing the nitro group. Platinum catalysts are preferred over palladium catalysts to minimize hydrogenolysis when reducing nitro compounds to amines. This Pt catalyst is also used for the hydrogenolysis of phenyl phosphate esters, a reaction that does not occur with palladium catalysts.

Prior to the 1980s, gold was regarded as having little catalytic activity. Advancements, spearheaded by F. Dean Toste (University of California, Berkeley) and others, have propelled gold into the forefront of transition metal catalysis. In particular, phosphine-ligated gold(I) complexes have recently emerged as powerful C–C bond forming catalysts capable of performing a variety of reactions under mild conditions. The list of useful C–C bond construction methods includes cyclopropanations, enyne isomerizations, Rautenstrauch rearrangements, ene reactions, and ring expansions. Typically, the catalyst system relies on a phosphine gold(I) chloride complex in combination with a silver salt co-catalyst to generate the active species in situ.