Neonicotinoids are systemic insecticides that are toxic to insects but do not affect mammals. They are water soluble and have the ability to migrate from treated soil into plant tissue, including fluids such as the nectar in flowers. These characteristics make them very useful for crop protection1. One neonicotinoid, imidacloprid, is currently the most widely used pesticide in the world2. The advent of the die-off of honey bees due to colony collapse disorder (CCD) has spawned investigation into pesticide exposure as the cause. Recent studies have indicated neonicotinoid pesticides as having detrimental effects on the brain cells of honey bees3. Bees can come into contact with these pesticides in several ways. Seeds that are treated with these pesticides can generate contaminated dust when using equipment that incorporates air for planting4. Also, some crops directly pollinated by honeybees such as cantaloupe and cucumber are treated with these pesticides5. Recently the European Union adopted a regulation restricting the use of three of these pesticides: clothianidin, thiamethoxam and imidacloprid6.

In this application, the Quick, Easy, Cheap, Effective, Rugged, Safe (QuEChERS) approach was used to develop an extraction and cleanup method for the analysis of seven neonicotinoid pesticides in flower blossoms. Analysis of the final extracts was done by LC-MS/ MS on an Ascentis® Express C18 column. This column was chosen due to the high efficiency associated with its Fused-Core® particle structure, and its relatively low backpressure as compared to sub-2 micron UHPLC columns. This allowed the column to be used in a standard pressure HPLC system with a relatively high concentration of aqueous at the start of the mobile phase gradient.

The blossoms used represent several types pollinated by honeybees: dandelion, sweet cherry and crab apple. The blossoms were picked fresh and then frozen prior to use. Prior to extraction, they were pulverized and spiked at 50 ng/g with a mixture of neonicotinoid pesticides. After 1 hour of wait time, extraction and cleanup proceeded as described in Table 1. Three replicate spikes and one unspiked sample were processed for each blossom type.

LC-MS/MS Analysis was performed using the conditions in Table 2. The MRMs used for each pesticide are listed in Table 3. Quantitation was performed against a matrix-matched calibration curve. Separate curves were prepared for each blossom type. For QuEChERS extraction, sodium acetate (NAOAc) was chosen as the salt based on previously published findings5. For cleanup, several different sorbents were evaluated. It was found that PSA/C18 yielded the best recoveries while still reducing pigmentation in the sample extract. PSA/C18/ENVI-Carb™ yielded the cleanest extracts (no pigmentation), but very poor recovery for all the target compounds. The zirconia-based sorbents Z-Sep and Z-Sep+ were found to be incompatible with these pesticides, yielding very low recoveries. PSA alone yielded an extract with more pigmentation than PSA/C18, and recoveries were very poor.

A summary of the recoveries from the three blossom types obtained after extraction and PSA/C18 cleanup is summarized in Table 4. None of the target pesticides were detected in the unspiked blossoms. Excellent recoveries and low %RSD values were obtained for each target compound for all blossom types. The extract color after cleanup appeared slightly yellow for the dandelion and crab apple, and pale green for the cherry, and all were significantly lighter in color than uncleaned extract. The TICs appeared very clean for dandelion and crab apple (Figures 1 and 2). The cherry had the most matrix present (Figure 3), although it did not interfere with quantitation. The use of blossom specific matrix-matched standards compensated for any additional ion suppression that may have occurred. 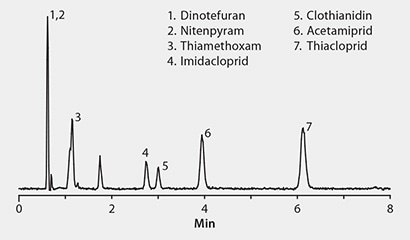 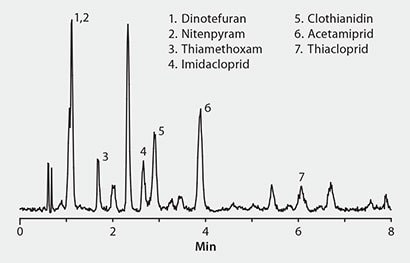 The QuEChERS approach can be used in the extraction of neonicotinoid pesticides from various species of flower blossoms. For sample cleanup, this same approach can also be used. Of the various cleanup sorbents evaluated, PSA/C18 was found to yield the best recoveries for these pesticides, while providing adequate matrix removal. The Ascentis® Express C18 column provided for an efficient separation with backpressure compatible with a standard HPLC system.