HomeFlavor & Fragrance FormulationRecent Advances in Biotechnology and the Impact on Flavors

Recent Advances in Biotechnology and the Impact on Flavors 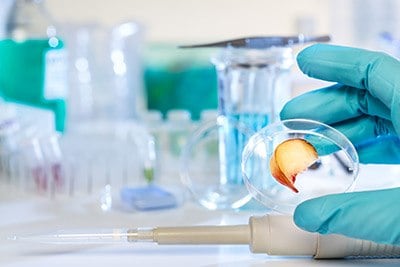 Over 30,000 years ago hunter-gathers in Asia began domesticating wolves beginning an intentional breeding program resulting in the over 340 recognized dog breeds we have today. Domestication and breeding for desired traits is the earliest form of human directed genetic modification. Cellular directed genetic modification, however, did not get its start until the late twentieth century. In 1973, Herbert Boyer and Stanley Cohen published their research on the first successfully genetically engineered organism.1 The era of genetically modified organisms, or GMO, had begun. Within a decade GMO technology offered its first available product with the introduction of human insulin produced by genetically modified bacteria.2

GMO-derived insulin was not made available in a vacuum, of course. In addition to the traditional, rigorous regulatory and safety review new drug products undergo, there was concern regarding any potential risks introduced by the new technology. Fortunately, the foundation for evaluating safety and regulating GMO was established in 1975 at the Asilomar Conference3 where scientists, legal experts, and government regulators met and agreed on guidelines for the safe research practices, evaluation, and review of genetic engineering research.

In addition to applications such as medicine or environmental clean-up, there was considerable interest in applying genetic engineering technology to food. In 1987, the Flavr Savr tomatoes became the first commercially available GMO food following its approval in the US by the USDA (United States Department of Agriculture). Through genetic modification (GM) technology, a gene was introduced into tomatoes to interfere with enzyme production that softens tomatoes leading to overripe fruit subject to damage or fungal infection. The Flavr Savr tomato thus had a longer shelf life than traditional tomatoes.

Applications of GM to the food industry expanded to crop protection in 1995 with the EPA (U.S. Environmental Protection Agency) approval of pesticide-producing corn. Further developments lead to crops resistant to specific herbicides such as Roundup Ready crops.

More recent advances in biotechnology now allows for the assembly of specific genes in a laboratory environment for use in GM rather than relying on genes from other organisms. Although this approach is often called synthetic biology, or synbio, the term synthetic biology has a broader definition involving the assembly of core biological components such as genetic circuits, metabolic pathways, or part of enzymes.

Although the Flavr Savr tomato did not see significant sales, pest-resistant crops were extremely successful, vastly growing the footprint of GMO in the food industry. The growth of GMO did not come without push-back, however, and public opinion called for the labelling of foods using GM ingredients. Currently European Union (EU) regulations require GM-labelling of food with pending regulations in the US expected to come into force in 2020.

Laws regulating GMOs in the EU date back to 19904 and the first law requiring labelling of food made with GMO ingredients dates to 19975. Current GMO labelling requirements in the EU are found in Regulation (EC) No 1830/2003. Any food sold in the EU which consists of or is produced from GMO must be labelled as containing genetically modified organisms. GMO for this regulation is defined as an organism “in which the genetic material has been altered in a way that does not occur naturally by mating and/or natural recombination.”6 Further clarification in this regulation indicate that GMO refers only to transgenesis (the transfer of genetic material from one organism to another) and exempts mutagenesis (alteration of the genome without introducing foreign genetic material) as well as cell fusion from breeding methods. A recent EU court finding7, however, now considers mutagenesis a type of GM and therefore subject to GMO labelling requirements. This finding does provide an exemption for mutagenesis techniques that “have conventionally been used in a number of applications and have a long safety record.” The recent EU finding seems clearly targeted at recent in vitro mutagenesis technologies but is sure to generate challenges and reexamination until a clear guidance is given on what biotechnology methods fall under the scope of this finding.

The United States has thus far escaped mandatory GMO labelling regulations, but that will change. Spurred by a 2016 mandatory GMO labelling law enacted by the state of Vermont, momentum grew for a federal law requiring labelling of GMO food. The Vermont law was thus overturned by the federal government pending a nationwide regulation. That regulation, USDA regulation 7 CFR 668 (the National Bioengineered Food Disclosure Standard) will require labelling of GM food or food made with GM ingredients. Implementation of this regulation will begin January 1, 2020 . Unlike EU regulations, the pending US regulation exempts material with no detectable genetic material. Testing methods for the detection of genetic material in accordance with this regulation are not yet defined or published.

Impact of labelling regulation on flavors

The increasing demand for natural flavors leads to more and more botanicals used as raw materials. In addition, advances in agricultural methods, spurred on by GMO, has made some botanical raw materials the preferred source for flavors. Fusel oil (FEMA number 2497), for example is by-product of fermentation of starches or sugars. Corn, grains, and beet root are typical sources of such starches and sugar and these raw materials are often of the genetically modified variety. Because the EU regulation requires GMO labelling on food produced from GMOs as well as food containing GMOs, those flavors derived from GMO feedstock should be identified with a GMO declaration. Under the pending US regulation, these same flavors do not require a GMO (or biotechnology) declaration since they do not contain genetic material, however, records of analytical testing are required to demonstrate the absence of genetic material. Care should be taken to verify if any GMO sources are used in the manufacture of flavors, in order to meet regulatory labelling requirements.

Although the largest impact of biotechnology on the flavor industry has been on the raw materials from which flavors may be extracted or derived, some flavors are made directly by GM. Aspartame, for examples predates GMO, but GM has been used to optimize yields of this sweetener. There are now several firms that focus on applying GM technology to microorganisms to yield useful fermentation products. Despite the GM-labelling requirements, the flavors derived from GM microorganisms often meet all the requirements of natural flavors and can be labelled as such.

These firms focus on using the latest synthetic biology on GMO yeast, so the microorganisms yield desired products during fermentation. Already there are several flavors available from this technology such as natural beta-bisabolene (FEMA number 4940), the natural citrus flavor nootkatone (FEMA number 3166) and valencene (FEMA number 3443) as well as the sweetener Stevia. Natural fragrances such as beta-elemene, beta-bisabolene, sandalwood oil, and patchouli oil are also available using this technology.

A landmark flavor produced using GM yeast is natural vanillin. The cost of natural vanillin is about ten times that of the synthetic, and GM solutions hold the promise to significantly reduce the cost of natural vanillin. The success in producing such valuable and useful flavors and fragrances is sure to continue to drive the field of biotechnology. Whether its an economical route to saffron or the development of new flavors, genetic modification technology is sure to bring many new flavor and fragrance products to the market.