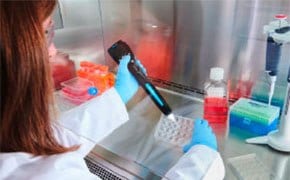 Cells in culture must be counted to monitor doubling time and for quantification prior to experiments or manufacturing processes. Cultured cells require routine monitoring not only for proliferation, but for viability, cytotoxicity and other measures of cell health. The choice of assay depends on the type of cells in culture, the study application, and the desired throughput. It is critical to quantify, or count, cultured cells prior to sub-culturing or downstream use in transfections, genomic studies, cryopreservation or other manipulations. 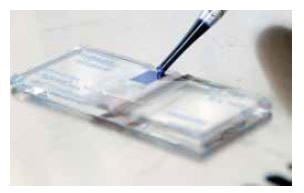 Cell counting chambers like the hemocytometer with Neubauer grids are common devices for manual/visual cell counting. A small aliquot of cell suspension is loaded onto the chamber of a gridded, precision-ground glass device , where it disperses over the etched grid by capillary action. The cells are visualized under the microscope and counted using a manual counter. The predefined volume of the chamber and the grid system are used to calculate the cell concentration. Imaging-based systems are available that automate the counting process.

Many automated cell counting devices use the same visual counting dyes and principles used in hemocytometry. Unlike automated cell counters that rely on object recognition, devices based on the Coulter principle have gained popularity for usability and precision. Coulter counters pump cell suspensions through a sensor that detects cells based on a change in electrical resistance. This allows more reliable detection of cells, even small cells, and high-accuracy cell counts. Portable models that are handheld (similar to a pipette) allow direct cell counts from the culture hood.

DNA synthesis: Monitoring active DNA-synthesis in cells is the basis for some cell proliferation assays. DNA replication can be measured by incorporating modified nucleosides, such as radioactive 3H-Thymidine or non-radioactive bromodeoxyuridine (BrdU) that is detected with an antibody.

Metabolic activity: Calorimetric assays that measure metabolic activity are suitable for analyzing cell proliferation, cell viability and cytotoxicity. The reduction of tetrazolium salts such as MTT, XTT and WST-1 to colored formazan compounds occurs only in metabolically active cells. The presence of ATP is also an indicator of metabolic activity. In the firefly luciferase reporter assay, ATP produced by dividing cells is used to oxidize D-Luciferin, which yields a bioluminescent light as the readout.

Dye exclusion: Trypan Blue staining is commonly used for viable cell counting. This method is based on the principle that live cells do not take up the dye, whereas dead cells take up the dye and appear blue under a microscope.

Fluorescent cell viability assays: 5(6)-Carboxyfluorescein diacetate N-succinimidyl ester (CFSE) labeling is a popular choice for measuring the number of completed cell division cycles in a cell population. Another membrane-permeable dye, Calcein-AM, is not fluorescent by itself, but emits a strong green fluorescence once it is hydrolyzed in a viable cell. In contrast, the nuclear dye propidium iodide (PI) can only reach the nucleus by passing through the compromised membrane of dead cells. Since both Calcein and PI-DNA can be excited with 490 nm light, simultaneous live/dead monitoring is possible with a single-excitation fluorescence microscope.

Mammalian Cell Culture
Applications, principles, and methods for in vitro mammalian cell culture including links to articles, protocols, and videos for proper aseptic technique, passaging and subculturing, and culture media considerations.
Primary Cell Culture
Primary cells isolated directly from human and animal sources maintain physiological relevance of the tissues from which they are derived, and are used for ADME/Tox screening. Find applications and methods for culturing mammalian primary cells in vitro.
Stem Cell Culture
An overview of different stem cell types, stem cell culture basics and stem cell applications in basic research and clinical research applications, such as tissue regeneration, genetic diseases and cancer.
Cell Growth & Maintenance
A synopsis of the conditions, media, nutrients, cultureware, and environments required for successful propagation of mammalian and yeast cells. Nutrient reagents, sterile technique and filtration, and requirements for 2D, 3D, and suspension cultures are described.
Cell Culture Troubleshooting
Expert tips for correcting common problems with cell culture including bacterial and fungal contamination, debris in culture media, cell detachment or clumping, slow growth, and low viability.
Cell Culture for Manufacturing
Cell culture is used in the manufacture of biologics including therapeutic proteins and antibodies, cell therapies, and vaccines. Cell lines and culture media for production are developed for maximum yield and bioreactors have a role in upstream processes.